The Life of Cows

Two Swedes discover that the way we treat cows says a lot about our connection with animals and the environment. 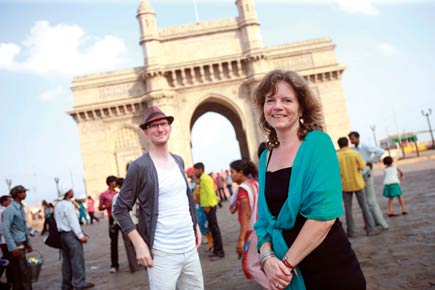 Two Swedes discover that the way we treat cows says a lot about our connection with animals and the environment.


Our cows may not pirouette through lush fields, but  they’re free. Free to stop traffic, free to roam, free to defecate anywhere. In many places, their lives are even state-protected. And according to Swedish radio hosts Christer Engqvist and Lena Nordlund, if the way we treat our cows is any indication, then we are a country of natural-born environmentalists.

Back home, Engqvist and Nordlund host a radio show called Planet of the Cows, that looks at the global state of the environment. The name of the show takes off from the fact that to Swedes, cows are a symbol of nature; a carefree cow is a happy portent of a healthy planet.

Recently, Engqvist and Nordlund have been visiting international cities looking at how different lifestyles impact the immediate environment. So between stopovers in nuclear-affected Chernobyl and the UAE, which has the biggest ecological footprint in the world, they landed in Mumbai, in search of the sacred Indian cow.

“In Sweden, the only news we get from India is about the Indo-Pak war or Bollywood,” says Nordlund. What they saw in Mumbai was not stuff that makes it to international news cycles. The Indian cow, they discovered, may not have meadows but it enjoys better social welfare than its global counterparts. “The situation of cows in India is unique,” says Nordlund. “They are treated like individuals. In the West, cows are an industry, a source of meat and milk.” And while Indians may not recycle, we are habitual re-users, making us more environmentally conscientious than Westerners.

In Sweden, despite the country having a population of liberal-minded people, the government allows the killing of injured animals as a form of mercy killing. So the couple was surprised to find injured cows recuperating in animal hospitals, and a fleet of free-for-use animal ambulances plying the streets treating injured stray animals.

Engqvist and Nordlund spent a day following one such ambulance. Moments before pack-up, they received word of an injured stray cow on the streets of a crowded Mumbai suburb. “It was a cow with one horn and a big wound,” says Nordlund, “when the vet began to inspect the wound, it ran away due to the pain.” After a dramatic chase with a lasso, the animal was finally tied down and treated. Engqvist says the scene taught him an important thing about the Indian way of life: “In India, there is no contradiction between human rights and animal rights. There is no conflict of interest. In Sweden, if someone runs an animal hospital, protests are made about treating animals at the cost of humans.”