The Kerala government is doing a deft balancing act of selling booze and opening de-addiction centres at the same time. 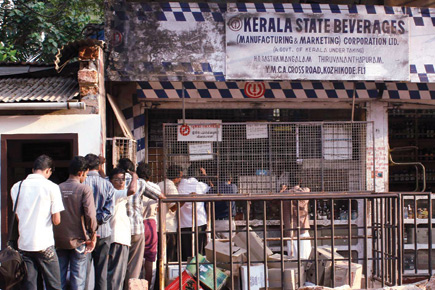 The Kerala government is doing a  deft balancing act of selling booze and opening de-addiction centres at the same time.


Keralites like to drink. And how! Per person a year, they drink eight litres of the demon drink. The national average is less than 2 litres. As many as 2 million Keralites drink every day, according to the Thiruvananthapuram-based Alcohol and Drugs Information Centre. Around 7 million others do so once a month. The age at which Keralites consume alcohol used to be 19 years in 1986; by 2009, it had come down to 13. Around 14 per cent of the state’s regular drinkers have behavioural problems.

The government loves it. It makes them a lot of money. The Kerala State Beverages Corporation is the monopoly distributor of Indian Made Foreign Liquor (IMFL) in Kerala. It is the only public sector undertaking that has consistently made profits,  which rose from Rs 17.52 crore in 1997-98 to over Rs 100 crore in 2008-09. This alcoholic utopia might not be quite the hallmark of a welfare state, but things got stranger last week when Finance Minister TM Thomas Issac presented the state’s budget. He said the KSBC has been asked to open de-addiction centres for alcoholics. Subsidised healthcare for drunkards would be part of KSBC’s corporate social responsibility.

Concerned citizens in the Marxist ruled state are laughing at the peculiar logic of first creating addicts and then de-addicting them. It is alarming how drunk the population is getting. Last Onam, Kerala’s largest harvest festival that happens during September, Kerala gulped IMFL worth Rs 154.44 crore, an increase of 41.53 per cent over the previous year. Notwithstanding the global recession, sales were an all-time high of Rs 4,600 crore in 2008-09. Ten years ago, it was barely Rs 1,000 crore.

The above numbers are just sales returns from KSBC’s 330 outlets. Add to that the 56 privately owned bars and outlets of the co-operative Consumerfed. If one considers the amount of toddy sold through the 5,000-odd registered outlets, the total consumption would be mindboggling. Arrack, the highly popular cheap brew banned since 1995, flows freely. Its sales value is put at Rs 13,000 crore a year by the state police department. In IMFL, rum sells the most in Kerala, followed by brandy and whisky. The state’s annual liquor business is worth Rs 20,000 crore.

It would take an optimist of gargantuan proportions to believe that a few de-addiction centres solves anything. The government is bankrupt and with liquor being a cash cow, it has no choice but to grow the business. And that means making more people drunk. The contribution of IMFL sales to the state exchequer last year was more than Rs 3,000 crore. That is 25 per cent of the state’s total tax revenue. It gets an additional Rs 150 crore annually from auctioning 5,000-odd toddy shops. Who in his sober mind is going to kill the golden goose?