Godman on the Run… Again

Nithyananda finds himself in an unholy mess 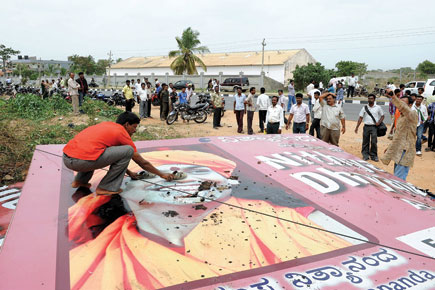 Nithyananda finds himself in an unholy mess


If being a godman is a career, then Paramahamsa Nithyananda had just got a promotion last month. In a surprise move, Arunagiri Nathar, the 292nd pontiff of the Madurai Aadheenam, a revered seat that has a large following in Tamil Nadu, took voluntary retirement and anointed Nithyananda in his place. He said he had been searching for years for an able, educated successor. Since then, Nithyananda, the 293rd pontiff now, has found himself in a holy soup.

Not that he was alien to controversy. Nithyananda is famous all over India for cavorting with a Tamil actress in a secretly-recorded video. Its airing had led to mob attacks on his ashrams and his being arrested. But after his release on bail, you would have thought all that was behind him. Except, whereas earlier it was just a scandal, what he now faces are serious criminal charges.

An NRI woman recently surfaced on a television channel, Suvarna TV, accusing the godman of sexually abusing her for five years. Nithyanada retaliated by sending press releases that said that the woman had a sexually transmitted disease and had come to him to be healed. “Since she has been afflicted as a result of her own bad karma, she could not be healed,” he added. And to make it even more bizarre, he said he was free of the disease and had submitted proof to the police.

The next day he called for a press conference, but it ended in a brawl after his disciples manhandled a reporter from Suvarna TV. The Karnataka government has decided to seal and probe the affairs of his ashram, 30 km from Bangalore, and issued a warrant for his arrest.

There are several unsubstantiated theories floating around about why Nithyananda finds himself in trouble. One says that some influential spiritual gurus resented his elevation as the 293rd pontiff and arranged for the brawl to happen in the ashram. Another rumour says that reformed underworld dons are eyeing the ashram property. What is, however, true is that soon after his coronation, Nithyananda had begun to reactivate his ashrams at Thiruvannamalai in Tamil Nadu and Bidadi near Bangalore. He also launched a legal counter-offensive against those responsible for the earlier scandal, including his former disciple and driver, Lenin Karuppan, who allegedly recorded the video. All in all, an unholy mess.