Ek… the Power of One 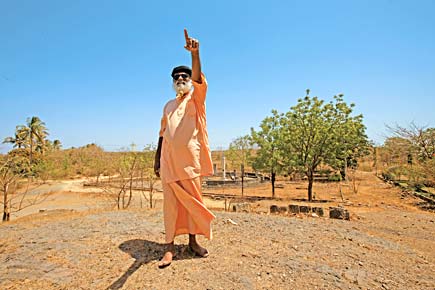 On election day, two policemen and four polling agents will travel a 60 km narrow, uneven road through Gir forest, home to the world’s only surviving population of Asiatic lions. They will cross a river and continue, not stopping or stepping out of their vehicles, since the forest department has warned them of leopards and crocodiles. Once they arrive near Banej temple in Junagarh, they will set up a polling booth.

After finishing his morning rituals, Bharatdas Darshandas Guru, the temple’s 58-year-old chief priest, will arrive to cast his vote. He will then return to the temple. The officials will stay put till 5pm, the time when polling ends. However, no one else will be coming to cast a vote. Bharatdas is the only voter here.

Originally from Pali village in Rajasthan, Bharatdas took up residence in Banej temple 10 years ago. “My father was a farmer. I left home when I was very young. I found the company of priests fascinating. I moved around with them and finally settled here,” he says. He lives alone inside the temple, the area’s only permanent resident. His helpers are transient.

Banej dates back 5,000 years, according to local legend. “The Kumbh Mela was on,” says Bharatdas, “and Kunti was heartbroken at not being able to bathe in the Ganga. Arjun then shot an arrow into the ground and captured Ganga here. Hence, the area is called Banej (carved out of an arrow).” Through a crevice in the mountain, the Banganga river flows out into a pond and surrounds the temple on three sides. Crocodiles swim lazily in the pond.

Bharatdas is an improbable priest. There are Rayban sunglasses perched on his weather-beaten face, he wears a chunky gold earring and on his right hand is a gold ring embedded with a precious Pukhraj stone. The Rayban is an integral part of his personality. He has it on even when he does his rituals. He also moves around on a motorcycle gifted to him by a disciple. His language is not priestly. When he speaks, sentences come peppered with expletives.

The forest department does not give the temple’s attendants and priests permission for ration cards and voter registrations. But Bharatdas managed to procure it through unknown means.  Which is why the booth just for him. Others travel to Junagarh district, about 50 km away.

Forest officials do not want Banej to become a tourist spot as they want to preserve its ecological balance. They also fear sanctuary land will be usurped. “There is no freedom here,” says Bharatdas, “You need permission for everything. I am a diabetic and have to travel 10 km to buy medicines. If I am late, I am not allowed to enter the forest area.” Since he has no access to newspapers, Bharatdas does not know who the candidates are. He would like to believe that even a single vote counts. “Did the Vajpayee government not fall because of one vote?” he asks. But as a lone voter, he also feels deprived of his voice. “No one listens to me and my problems,” he says.