Mayawati felt threatened by this new Dalit goddess. Now that she is out of power, the temple will finally rise 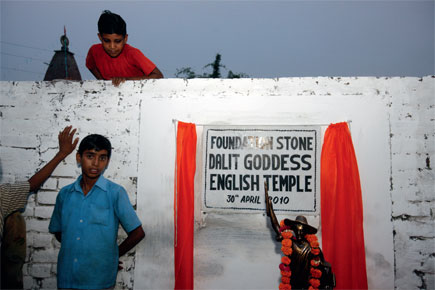 Mayawati felt threatened by this new Dalit goddess. Now that she is out of power, the temple will finally rise


In comparison with the huge statues of former Uttar Pradesh Chief Minister Mayawati, this two-and-a-half feet bronze figure, clad in robes, a wide-brimmed hat and holding a pen, didn’t look like much competition.

“Who is this new Dalit goddess?” Mayawati had allegedly asked her officials when the foundation stone for the statue was laid in Banka village, Lakhimpur Kheri district, UP, in 2010. Whoever she was, Mayawati didn’t want her around.

The new deity was Goddess English, as imagined by Chandra Bhan Prasad, a Dalit scholar, columnist and researcher. Prasad believes only literacy in English can free Dalits from their fate.

But now that Mayawati, Bahujan Samaj Party (BSP) supremo and a self-proclaimed champion of Dalit rights and welfare, has been voted out of power in UP, the little bronze statue is to be reinstalled in a temple within a school campus.

Around the time the foundation stone was laid, Mayawati’s officials had stalled the work, citing lack of permission for such a construction. But now, says Prasad, the temple will be ready within two months, in time to celebrate English language day on 25 October. The date also marks the birth anniversary of Lord Macaulay, who sought to create an English-speaking class in India.

Prasad belongs to the Passi community, previously branded as untouchable. He is a researcher who works with leading universities abroad on issues regarding the Dalit community. He is planning to build more such temples across India to pitch for English as the only means for Dalit emancipation.

“Mayawati did not like the idea [of a statue],” says Prasad. In fact, she would not allow any activity within the Dalit community outside the BSP. “This was perceived as a nuisance and a threat,” he says.

“By tradition, Dalits were not allowed |to enter temples. They foundBuddha as their god but they didn’t have goddesses. There was a vacancy in the community for a Dalit goddess. I thought ‘Why not deploy some kind of metaphor which spreads faster and wider?’ The Statue of Liberty is a landmark. It is all about liberty and modernity. Saraswati looks illiterate in front of the English Goddess. She has no pen, no computer. Our goddess is modern, [she even] has an email address (poineercbp@yahoo.com).”