A School for Politicians

For Rs 2.75 lakh, a Pune institution promises to turn you into a full-fledged neta 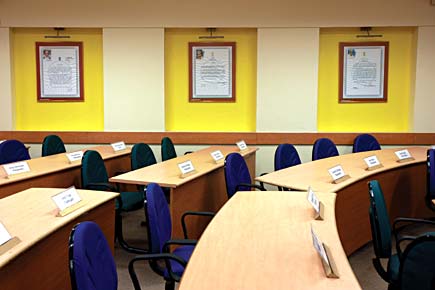 For Rs 2.75 lakh, a Pune institution promises to turn you into a full-fledged neta


This is how a classroom for aspiring politicians looks: the benches are, like a micro Lok Sabha, aligned in a semi-circle, facing a podium with intersticing pathways; on every desk is a nameplate, and behind them are students in their uniform—a white kurta, pyjama and a half-sleeve khadi jacket. At the MIT School of Government (MIT-SOG) in Pune, students have paid Rs 2.75 lakh for a year of training to be a politician.

Launched in 2005, the school’s one-year Master’s diploma in social and political leadership is open to any graduate below 35 years, including aspiring politicians, bureaucrats, NGOs and even sitting MPs/MLAs. So far, it has taught 150 students the complexities of government. “The idea is to educate students about electoral processes and political institutions. And to hone their leadership and oratory skills,” says executive director Rahul Karad. Students learn from experiences, case studies and role plays. There is no university affiliation or job guarantee, but the USP is a six-month internship with a party or political leader.

“The most important aspect of learning in this programme is through attachment. It is with a political, social or corporate organisation. On completion of their attachments, they get offers to continue their involvement. This can be the starting point of a successful career,” said Karad. Though his family has links with the Congress, Karad says most of the students want to intern with the Bharatiya Janata Party.

One alumni, D Vasanth Kumar, contested this year’s Andhra Pradesh Assembly polls from Zaheerabad on a ticket from Chiranjeevi’s Praja Rajyam. An engineering graduate, Kumar, 29, took the course to enter mainstream politics. “I am from the rural area and it helped me get out of my orthodox mindset. It helped me understand issues better,” he says.

Jagdish Singh, 31, another alumni, is working as a personal secretary to former BJP Uttarakhand chief minister Bhagat Singh Koshyaria. He is also pursuing his doctorate studies. “The school gave me a good platform. I am keen on joining politics in the near future,” says Singh.

Faculty member Vanisree Ramnathan says teaching aspiring politicians is not easy. “A week’s preparation goes into a single lecture. Often the students are aggressive as they believe they are leaders. We, as teachers, have to be neutral. We can’t get emotional,” she says.

The school is modelled on the lines of the John F Kennedy School of Government at Harvard University and is run by the Maharashtra Academy of Engineering and Educational Research’s MIT Group of Institutions. Its chairman is former chief election commissioner TN Seshan, not exactly the most successful of politicians, but the guest faculty includes LK Advani and Rahul Gandhi.