Since his college days, Krishnendu Singha has maintained a record of deaths in his district 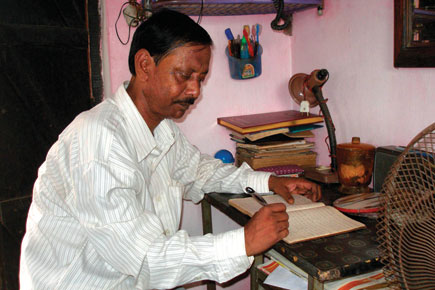 Since his college days, Krishnendu Singha has maintained a record of deaths in his district


Like many others, Krishnendu Singha has maintained a diary for many decades now. But his entries have nothing to do with his experiences

or thoughts. Instead, the pages are filled with names of the dead. This resident of Birbhum district’s Mollarpur village, about 300 km north of Kolkata, has been diligently recording deaths in the entire district for the last 33 years.

Singha also notes down the cause of death, and, in cases where it is ‘unnatural’ like murder or suicide, the circumstances and other details that he thinks could have caused it. The 53-year-old started this ‘hobby’ while in college. There are more than 35,000 entries in his diaries.

“My father, a history teacher, used to maintain a diary. He used to tell me to keep one myself. I decided to take his advice in college. My first entry was on the day a relative, who lived near us, committed suicide. I noted down details of the suicide in my diary. I then decided I would keep a record of deaths in my diary,” he says.

In the beginning, Singha used to record deaths in his village and neighbouring ones. As the years passed, he extended it to most parts of the district. Friends and acquaintances tip him off whenever someone dies in their area.

“I travel as soon as possible to the place where the person has died, or his house, and gather information. I mainly ask about the person, his or her family and the causes, circumstances leading to death,” Singha says. There have been instances when he reached the spot even before the police. Since he minutely notes down details, his notes have come in handy for police and forensic investigators. Singha’s diaries also help illiterate village folk who don’t keep records of deaths in their families. “We often have people turning up for death certificates of family members who may have passed away years ago. We take Singha’s help in tracing the dead and circumstances of deaths,” says a panchayat member.

The Mollarpur gram panchayat, of which Singha is secretary, is planning to digitise his diaries. The

police also take Singha’s help in tracing names and other details of deaths they don’t have in their own records. Macabre though it may be, the strange hobby serves an important public purpose.