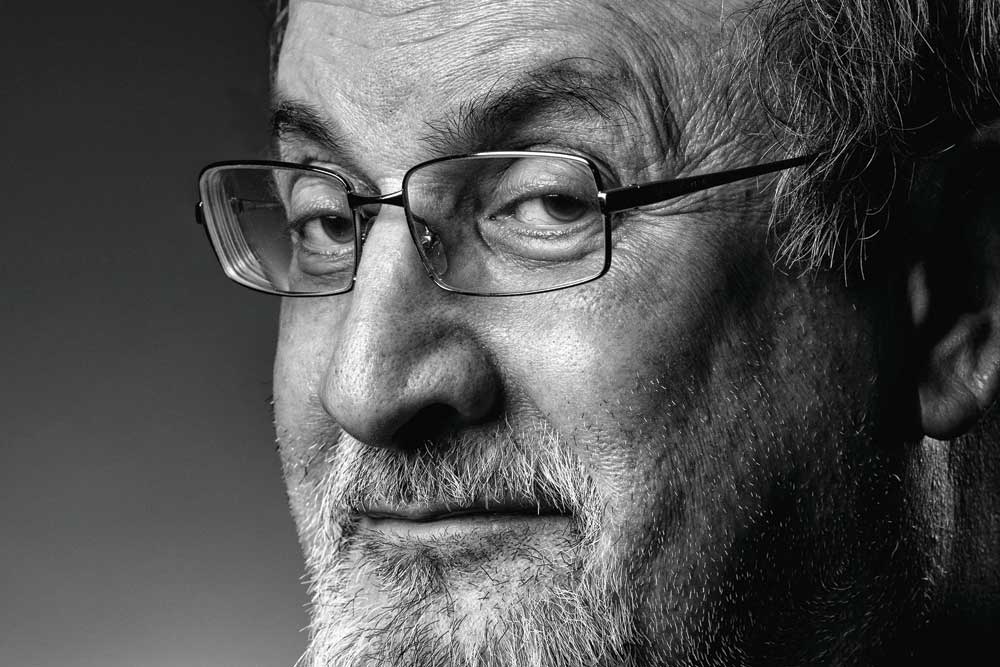 BEING IN THE world is a state of the writer’s mind. It’s about being alive to the urgency with which history beckons from across the street. Such writers tend to be straitjacketed by some of us as overtly political or socially conscious or ideas-heavy. We put our writers in those convenient boxes, indexed by our old biases. Some of them, it must be said, belong to those boxes, deservedly, their imagination subordinated to their sociology. They want to change the world, and angst modulates the rustle of their pages. The originals are elsewhere, beyond the slogans of the day, beyond the headline-friendly poetics of the street, the storytellers of this big, bad, broken world where no ideology, no cause, no social struggle, is allowed to take over. When Salman Rushdie introduced Saleem Sinai to the world, the moment marked the most redemptive subversion in Indian fiction written in English. Saleem’s first cry chimed with India’s freedom, and he was born handcuffed to history. It’s a bondage that Saleem’s creator shares with him, and the ease with which Rushdie has carried it across the pages brings out his resourcefulness and relevance. Midnight’s Children, in its structural rebellion and historical sensibility, did to the Subcontinent what The Tin Drum and One Hundred Years of Solitude did to Europe and Latin America respectively. It was storytellers such as Rushdie that prompted someone like Milan Kundera to say that the art of the novel, abandoned by its original homeland, has migrated to the tropics. Rabelais does not joke any longer in Europe. More than 25 years ago on a Valentine’s Day, when Eastern Europe was busy repudiating the bad joke of ideology, Rushdie lost his freedom; it was as if the dying revolution of faith needed a blasphemer to stay alive. As Rushdie vanished, he became the Solzhenitsyn of the post-communist era. He may have lost the world for a few years, but not the stories. They were stories that travelled back in time, sought distant geographies in memory as well as history, but, in the end, they were anchored in the pulsating rawness of the now. His new novel (reviewed as a cover story in Open, September 11th, 2017), set in the America of the Obama years and the Trump inauguration, tells the story of an Indian immigrant in Manhattan. Nothing is left untouched, whether it’s identity politics or culture wars, in this American tragedy staged with a dash of Sophocles and Scott Fitzgerald. What makes The Golden House a contemporary classic is that, in the art of Salman Rushdie, the handcuff of history can’t contain the freedom of stories. Excerpts from our conversation.

As a novelist, you tend to engage with the world you inhabit not just through imagination, but through arguments as well. Can I say it brings a political and cultural urgency to your work?

I’m always looking for ‘crossroads points’ where the narratives inside me intersect with the larger narratives outside. I’m not sure about ‘political urgency’ because these books are not political in the sense of agit-prop, but cultural urgency, yes, I think that’s fair.

Is dissent the essential condition of being a writer?

No, not really. There are plenty of excellent non-dissident writers, for whom engagement with public material is not essential. I think it’s better to say that the writer’s voice is a single individual voice and nobody else ‘owns’ it. Here is the world as I see it, the writer says, take it or leave it. This is the gamble of literature: to offer a personal vision and hope that it will be shared.

Does such a position put the writer in conflict with power, political as well as religious?

Clearly, writers have often found themselves at odds with power, from Ovid to Mandelstam and Lorca and up to our own moment. Some writers, such as the Enlightenment figures who deliberately took on the power of the Church to limit speech, put themselves in this position deliberately. Others find themselves there because their truth conflicts with ‘official’ truth.

All the big political figures of your worlds have gone through your fiction, from Mrs Gandhi to Bhutto to Lady Thatcher to Trump. Isn’t every fiction political in some way?

Maybe. I don’t really have an answer to that question. Certainly as regards my writing, I’m interested in politics, but I’m more interested in human beings and in human nature, the great constant.

What’s it like being a novelist in Trump’s America?

It’s like being a novelist anywhere else—in Modi’s India, for example. The news is distressing, but we don’t let it prevent us from doing our work.

What repulses you most: the aesthetics of Trumpism or the politics of it?

I don’t see any need to choose between these two repellent things.

In The Golden House, Trump gets maximum comic treatment. He is a cartoon figure or the Joker. Do you miss Obama?

I miss the idea we entertained for eight years, that the better self of America had risen above its worst self. We were wrong.

Can we say kitsch is the new aesthetics of populist politics, something similar to what Kundera said about communism?

Don’t you think characters like Trump make the world less dull for a writer?

The world is not in the least dull. Trump is the last thing we need to make the world interesting. The monstrous is not the only or even the most inspiring alternative to dullness.

“I have never seen an attack on truth such as the assault now in progress in America. It makes it more important than ever for writers to defend the sense of the real”

Besides: could there be a flatter, more two-dimensional caricature of a human being than Trump? An individual wholly lacking in depth.

The three countries inseparable from your life—India, England and America—are witnessing a political churn. Is there a common link?

The whole world is churning as the pillars of the old order crumble. However, calamity is not inevitable. I think often of Gramsci’s recommendation: ‘Pessimism of the intellect, optimism of the will’.

You mention the ‘theatre of identity wars’ in The Golden House, played out on both sides of the Atlantic. Is it identity that propels divisive politics?

Identity politics seeks to make us define ourselves more and more narrowly and so increases the probability that we will not find common ground with one another. But what the novel knows is the human nature is not like that; it’s broad, not narrow, heterogeneous not homogeneous, contradictory not orderly. This broad understanding of our selfhood is the best way I know to move away from the divided reality of this difficult moment.

Are liberals losing the argument today?

My view is that the argument has to be won. Losing is not an option. I refuse to accept that the present represents a ‘new normal’.

The Golden House is built on an immigrant’s story. Can it only happen in America: the story of an immigrant as a fairy tale?

It’s a pretty dystopic fairy tale! More of a tragedy than a fable. But of course, migrant stories are at the heart of the American story, and right now we have migrants from many places—Junot Diaz, Jhumpa Lahiri, Yiyun Li, Chimamanda Ngozi Adichie, Nam Le— enriching that American story with their narratives.

Is that fairy tale coming to an end in Trump’s America?

I don’t believe in fairy tales.

Is an immigrant always an exile?

Has truth become the most contested item in politics?

I have never seen an attack on truth such as the assault now in progress in America. It makes it more important than ever for writers to defend the sense of the real. This again is a thing the novel has historically been good at doing: to create an agreement between the writer and the reader about the nature of reality. We read a book we like and we say, yes, this is how it is, this is how we are, this is the world.

I don’t often refer to any idea of the sacred, but there are such things as facts, and they need to be respected. The world doesn’t need you to believe it’s round in order to be round. There is a thing called evidence that proves its roundness, irrespective of your opinion.

India looks like a backstory now, India of a certain vintage. Can you relate to the India of the moment?

I’m paying attention. I’m not sure I ‘relate’, but I’m attentive.

I miss people. I’m not nostalgic about the past.

The Golden House is written by a chronic movie buff. How big a role has popular culture played in your art?

I have always been as interested in film as in literature, and I don’t dismiss it as popular culture. Of course there are films —and books—that enter into and shape popular culture, but the cinema at its best is an art that is fully the equal of the novel.

The art of storytelling itself is central to your fiction. Is it always under threat? Or is it something to be reminded of again and again in this world?

I just think storytelling is the best way of proceeding, in life as well as in books. We are all narrative creatures, storytelling animals. And in literature, I’ve always thought, story is the driving force, the engine. And if you want to build a big car, put a big engine in it. 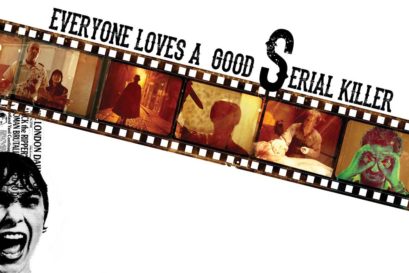 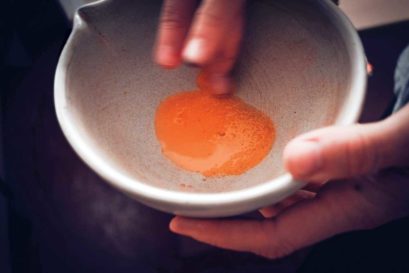 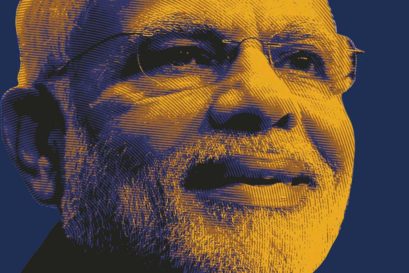 The Winning Ways of Modi

Are we moving towards a Congress-less federation?