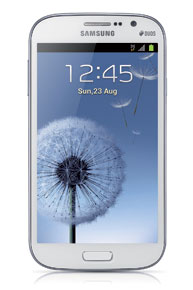 
Big screen phones have their own set of advantages and disadvantages. Their larger screens allow you to browse the web and read ebooks, but they are still small enough to be carried in a trouser pocket. Samsung popularised these mobile phones with its Note range. Now it has launched a new series—Galaxy Grand. It is slightly thinner, and ergonomically designed. The 5 inch TFT screen is WVGA (480 x 800 pixel), and runs on a 1.2 GHz Dual Core processor. While it is obviously a poor cousin of the Galaxy SIII— which has a Quad Core processor and a high resolution screen—it still runs Android Jelly Bean (4.1.2).

I am no fan of phones this big, but they appeal to many people because it lets them carry one less device. Although it has a WVGA screen, the images are sharp and clear enough for everyday use. There is an 8 megapixel rear camera and a 2 megapixel front camera, and the phone does not go into standby mode till the front camera can see you. Although the screen is only WVGA, the rear camera can record full HD videos. Samsung also claims the camera has zero shutter-lag, allowing you to capture the image you see.

The plastic case of this phone gives it a tacky feel, especially when compared with other Samsung phones in this category. Again, I know people who like its look and feel, but I don’t.

The Grand has two Sim card slots, but you can use only one Sim at a time. Internal storage is limited to 8 GB, of which only 4 GB is available to the user, but you can increase it to 64 GB with a microSD card.

It has Wi-Fi, Bluetooth, GPS and supports 3G. At 162 gram, it feels a little heavy. And I was unable to test the battery life, so I can’t comment on that.

The Grand is targeted at consumers who want an economical phablet, but do not want the risk of going with an unknown brand. It should be available in February.