For long relegated to the sidelines, heroines in history and mythology are taking centrestage in literature 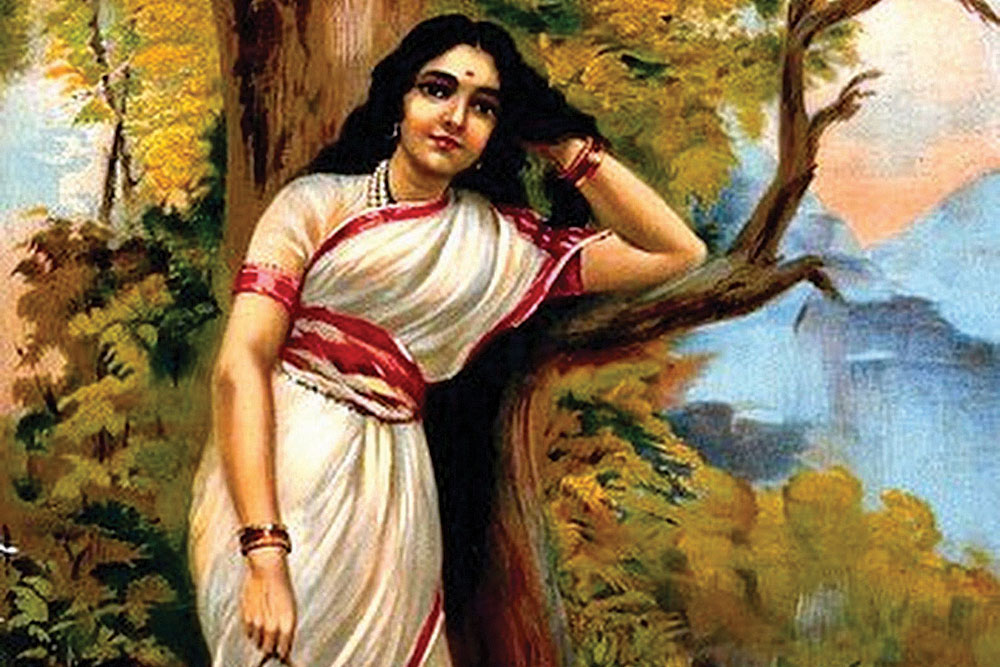 
SHE WAS ALL of four-and-a half feet tall and lived and flourished at the turn of the 19th century. One of her lovers, Walter Reinhardt Sombre, from whom she got her name, was known as the Butcher of Patna for having executed 150 English soldiers. Among her lovers was both a Frenchman Le Vassoult and an Irishman George Thomas. Not only did she inherit a principality from Sombre, Sardana, but she also controlled a mercenary army of 100 European adventurers. Most recently, she was portrayed as a player in Shah Alam II’s court in Gurinder Chadha’s TV series Beecham House. As Archana Garodia-Gupta writes in The Women Who Ruled India: Leaders. Warriors. Icons, ‘with her diplomatic abilities and her commanding presence, Begum Joanna Nobilis Samru is an unlikely feminist icon of that age.’

Champion quizzer, former president FICCI FLO, and newly minted author, Garodia-Gupta is fascinated by Samru. “She rose from being a nautch girl to cleverly playing politics to her advantage with powers like the Mughals, Marathas and the British,” she says. Garodia-Gupta is not alone in her passion for long forgotten characters from history and mythology. She joins an emerging sisterhood which is rescuing women leaders from obscurity. And with a flourish to match their subjects. Garodia-Gupta writes with some pleasure of Rani Didda of Kashmir who was born lame and was carried around by a woman named Valga, even in the races, which she invariably won.

There are many seemingly peripheral characters in our stories, from Gandhari to Ahalya, Ahilyabai Holkar to Rani Durgavati of Gondwana, who are now being brought to the centre. Through a combination of scholarship and imagination, their lives are being excavated from the forgotten chambers of our hearts and minds. From the epics to history, from battles to peacetimes, there are people, invariably women, who have virtually been excised. The mothers, the wives, the sisters, the courtesans, the queens, all mere footnotes to the deeds and misdeeds of their men.

Says Vanessa R Sasson who has written Yasodhara: A Novel About the Buddha’s Wife, “I was particularly drawn to Yasodhara, wife of the Buddha, because of the sense of loss I see in her narrative. She loses everything, bit by bit. It seemed like a story that needed telling. She was with the Buddha from one lifetime to the next, but she is virtually invisible in Buddhist circles. The most common comment I have received about this book has been, ‘I didn’t even know the Buddha had a wife!’” The Buddha explored the concept of suffering, she notes, but Yasodhara experienced suffering, losing one piece of her life after another. She was living the teaching he was giving.


As Yasodhara says in the novel, in a conversation with her mother-in-law: ‘The pain morphed into anger almost instantly. ‘Well, he didn’t stay because of me either, now did he?’ I exclaimed violently, finally allowing myself to express what I was holding inside. ‘He left me, Mother! I am a disgrace now! And everyone knows! Everyone in the entire kingdom. He made me a widow!’ I launched my cup against the door I had spent so much time staring at and watched it explode into a thousand little pieces. ‘How could he do that to me?’ I screamed.’

Part of the reason women’s voices have been silenced or muted for so long is also because their anger cannot be audible. Gandhari, for instance, is always portrayed as the dutiful, blindfolded wife of Dhritarashtra, with little understanding of why she chose that life. That was the starting point for Aditi Banerjee, a lawyer, who has written The Curse of Gandhari. She was always fascinated by Gandhari’s strength. She was a woman of iron will, who struck her belly so hard upon hearing that her rival Kunti had given birth that the foetus was expelled from her body by the sheer force of that blow. She had the power to protect her son Duryodhana from death by the mere power of her gaze, and when Yudhishthira’s toe came into the periphery of her vision after the war was lost, that mere glance from the corner of her eye was enough to blacken his feet. And, of course, she dared to curse Krishna himself, a curse he accepted with a smile.

There are many seemingly peripheral characters in our stories, from Gandhari to Ahalya, Ahilyabai Holkar to Rani Durgavati, who are now being brought to the centre

Says Banerjee: “What I love about Gandhari is that she is not a conventional heroine. She shows anger and bitterness on occasion and does not meekly accept her fate. She exerts power and agency over her life in different ways, as constrained as her circumstances were. She does not yield when Kunti has given birth before her; she knows her sons are doomed yet does what she can to protect them; she questions Krishna on the destructive war that he has wrought. So, this incredible strength and complexity of her persona is what drew me. And also the question of her blindfold. What was the meaning of it? Was it the sign of a devoted wife, a rebellious act of spite or a metaphorical blinding and hiding away of herself from the realities of life? Or perhaps something more enigmatic that we are not meant to analyse but simply behold with awe and respect as an incredible act of sacrifice.”

But just as the epics were written by men, history is usually written not just by men, but also victorious men. On the rare occasion that women’s accounts are available, such as Humayun’s sister Gulbadan Begum, who wrote Humayun-nama, or Aurangzeb’s sister Jahanara Begum who wrote many books, including a biography of the Sufi saint Khwaja Moinuddin Chishti. Garodia-Gupta sees a pattern in the cases where women have acquired power and lived to have their tales told—despite the best efforts of some men. Many women, for instance, were deliberately erased from history—Firoz Shah Tughlaq actually had Razia’s name excised from the list of Delhi rulers. 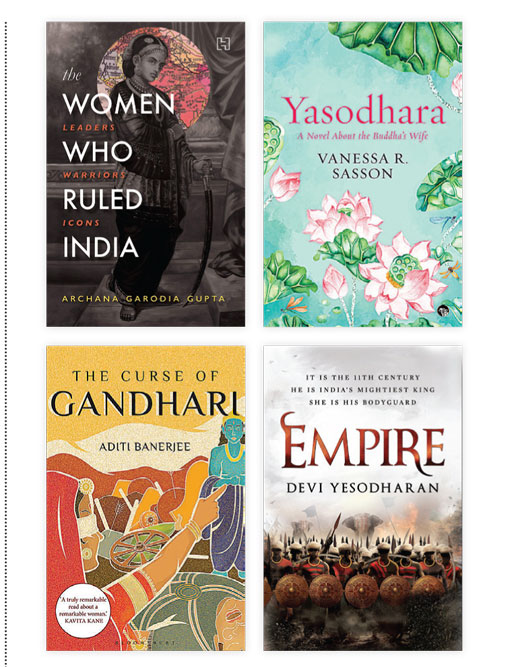 Also, as a colonised people, we lost significant parts of our history and libraries many times over the millennia. Many regional legends survive, however, about local women rulers, which can then be verified by looking at other sources. Garodia-Gupta puts it down to three reasons: the women who were powerful had champions, they had education, and they had experience at administration. She calls it the male pattern of education, normally due to the male champions, and gives examples: of fathers (Iltutmish for Razia Sultana, Ganpatideva for Rudrama Devi of the Kakatiya dynasty), mothers (Qudsia Begum of Bhopal for Sikandar Begum), fathers-in-law (Malhar Rao for Ahilyabai) or husbands (Ali Adil Shah for Chand Bibi of Bijapur). They also had administrative experience before they actually came to power. Above all, she says, they were not shrinking violets. They believed they were by far the best choice to run the governments of the day.

THE MORE RESEARCH there is, the greater the depth and breadth of characters, notes Devi Yesodharan who has written Empire, which gives life to the foreign female soldiers in the Chola empire. As for myths, Wendy Doniger put it perfectly when she noted that myths are mirrors, that the way they are narrated and written reflect the culture they are in. As women emerge as storytellers and narrators, it is no surprise that we are focusing more on the motives of characters like Sita and Draupadi. In the traditional stories these women are offered a reverence that is a double-edged sword, because their treatment as wife and mother traps them in these definitions, and they are not supposed to venture outside those drawn lines (like the Lakshman rekha, these lines are both physical and metaphorical) and they are punished when they step outside it). Women writers are beginning to challenge that trap of a definition, and explore alternative tellings of these stories more closely, notes Yesodharan.

Kavita Kane has made it a passion to give form and structure to so-called bit players, whether it is her novels on Urmila, Menaka, Surpanakha, Satyavati and now Ahalya. Kane says, “They are all minor characters, often overlooked, but who are triggers of major proportions, impacting the narrative tremendously. By placing the spotlight on these almost hidden characters, they are now seen fully, visible and no longer voiceless. By lending them a voice, they speak out and have questions which they want answers: the plot remains the same, but the narrative changes with their alternative perspective.” In her new book, Ahalya’s Awakening, Ahalya is no longer a mute spectator of her own tragedy. Rishi Gautam’s wife, she was seduced by Indra for which she was cursed to turn to stone, to be liberated by Ram years later. “But who is she? No one knows or really cares,” says Kane.

“With her diplomatic abilities and her commanding presence, Begum Samru is an unlikely feminist icon of that age,” says Archana Garodia, author

Her almost wordless presence is ironic as her image of the devoted wife crumbles quickly to an adulteress. She is seen as this silent sufferer who takes what is doled out to her—her marriage as well as her curse, not having a say in either. But this is not Valmiki’s Ahalya: who knew what she wanted and desired. She got it at a cost but she paid for it with remarkable grace and courage.

Kane believes this small incident of Ahalya in the texts, a mere mention otherwise, serves as a precursor to Sita’s future banishment as it questions marital equations and the penalty of infidelity and its significance even today, still caught in the conflict of love and loyalty, marriage and morals, desire and deceit. Ahalya’s story in this book delves into the mind of a woman who yearns to control her own destiny. She adds: “In her tale lies the story of every woman, even today.”

Much of the visibility gap has to do with the way history is taught in India. Says Yesodharan, “When history is reduced to bullet points we get very little nuance, and history in schools is still very much a rote memorisation of events and dates. We would benefit greatly if some of our wonderful history books are made available as additional reading in schools. It’s not just history, this is also relevant in literature. If students are being taught Shakespeare plays, British short stories and the myth of Achilles, why not Sangam poetry, the Tamil warrior poems, the Kalidasa epics? The translations available are also in an English that is a lot more accessible than the early Modern English of Shakespeare plays.” And will go a long way in preventing the invisibilisation of women heroes.