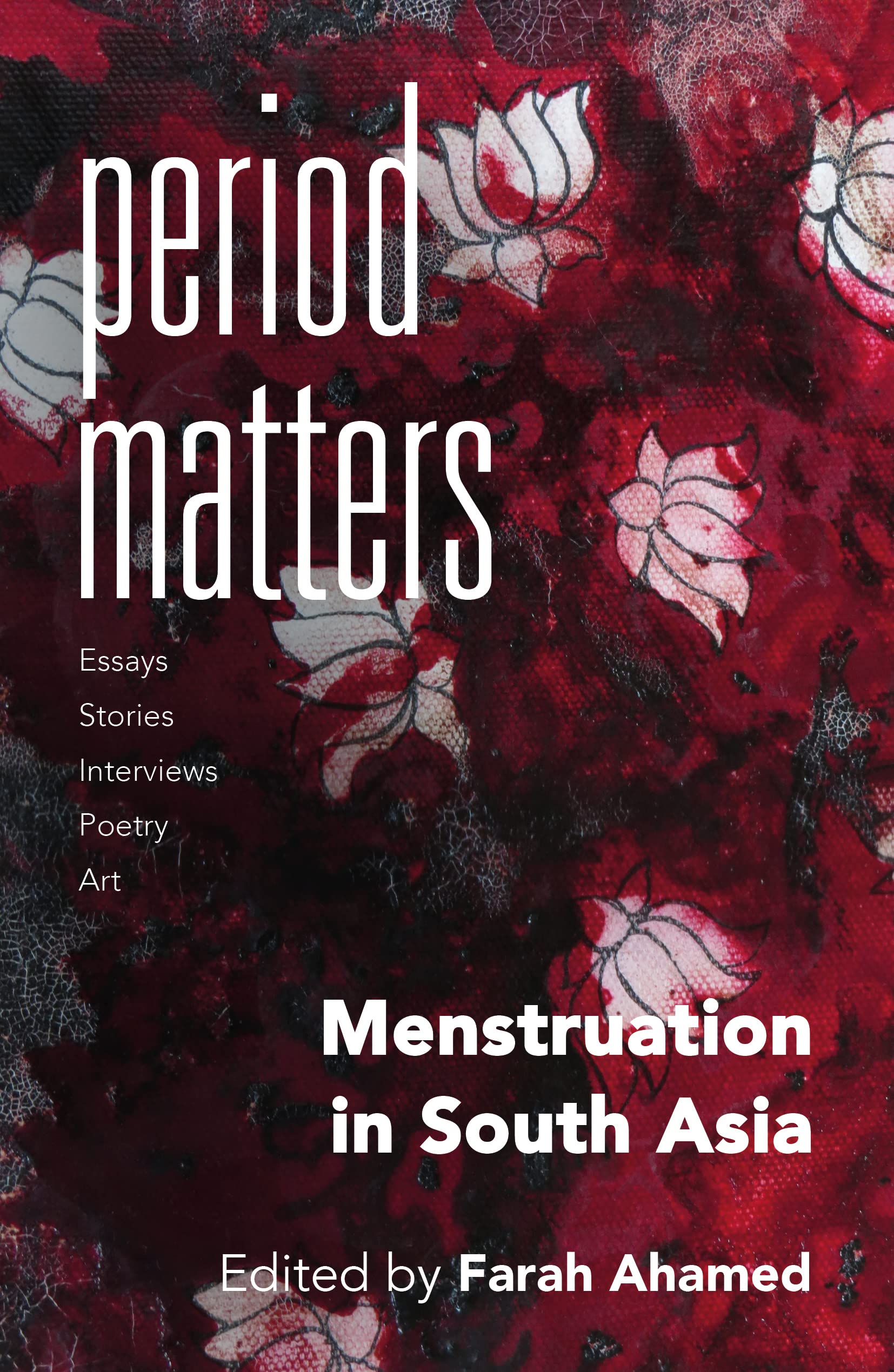 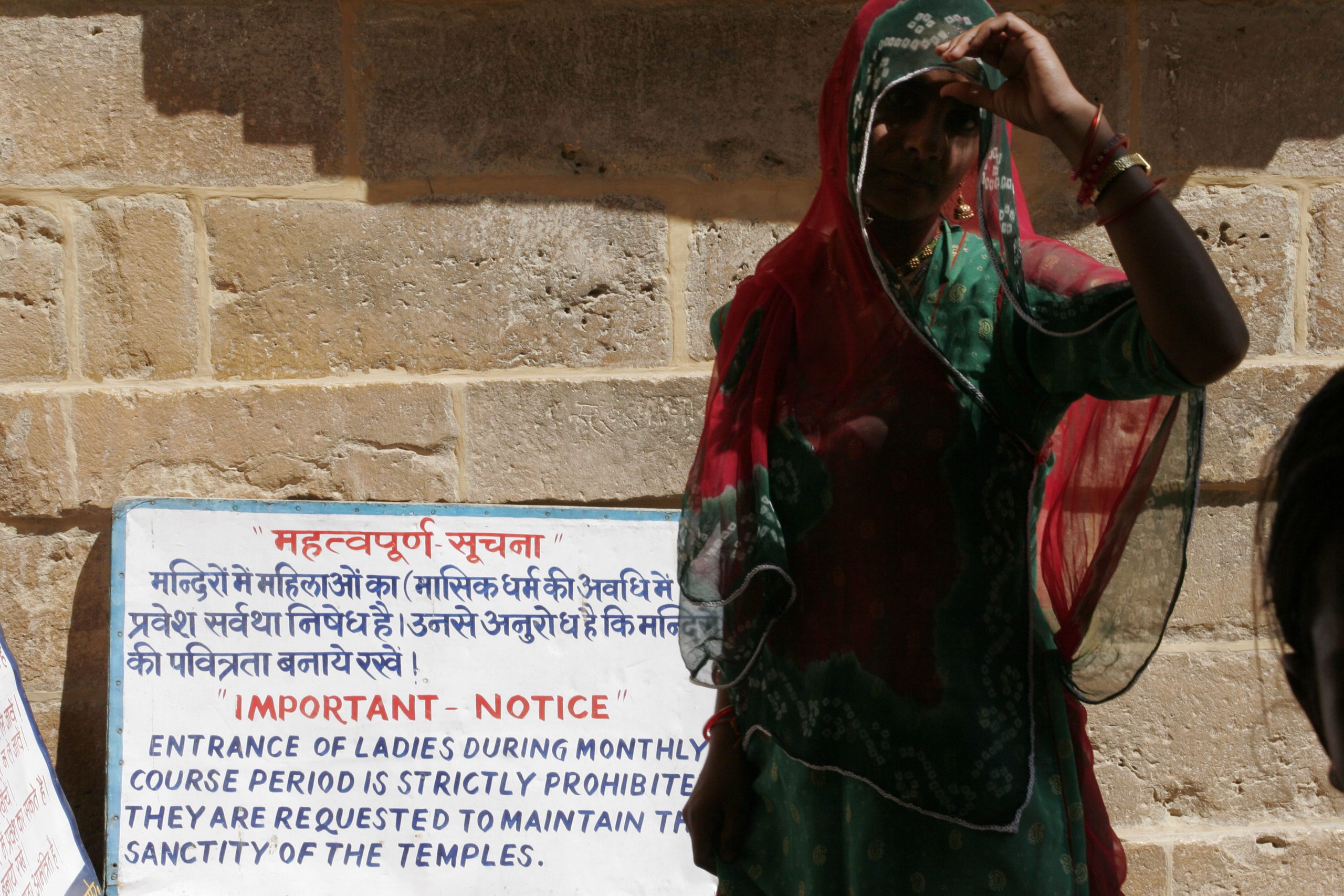 A woman at the Jain temple, Jaislamer, Rajasthan (Photo: Alamy)


Data from the latest National Family Health Survey (NFHS 5) indicates that one in three women use unsafe menstrual products in some of the poorer states of India. It also shows that around 27 per cent of young rural women use unhygienic methods of protection during their menstrual period as compared to 10 per cent in urban areas. Women in rural areas and marginalised communities do not have easy access to safe menstrual products impacting their menstrual hygiene and health. Traditions, customs and biases persist due to lack of awareness, hindering the flow of information about this vital body function.

Girls mostly learn about menstruation from their mothers at the time of menarche. At this time, they also learn about the various taboos and misconceptions resulting in the continuation of unnecessary beliefs regarding menstruation.

In Period Matters, Farah Ahamed, looks at period poverty, privacy, hygiene and the many obstacles to safe menstruation among women hailing from marginalised and less privileged backgrounds in South Asian countries. It is a compilation of interviews, fiction, non-fiction, poetry and artwork, highlighting different perspectives about menstruation and the challenges women face in experiencing a healthy and dignified menstrual process.

In many of the interviews and essays, the similarities with respect to misconceptions and rituals across South Asian countries become apparent immediately. In Sri Lanka, Nepal, Bhutan, Afghanistan, Pakistan, India, the rituals and taboos may vary in intensity but the shame and secrecy associated with menstruation remain disturbingly similar. The practise of seclusion in room or shed separate from the house, restrictions in entering the kitchen, eating certain types of food, denial of entry to religious places and social functions apply across regions. In many cultures, girls are forced to drop out of school, and are married off, without proper information being given to them regarding the process of menstruation and its effect on their bodies, and how it plays a part in childbirth.

Ahamad’s interview of two trans people, Farzana and Chandan, who have claimed the feminine identity reveals that they follow the rituals and taboos associated with menstruation. They attempt to forge a connection with other women by wearing sanitary pads for a week every month, observing dietary restrictions, imagining pain and fatigue, and following the rituals practised by menstruating women. In contrast, Javed, a transman, endures dysphoria, every month when he gets his periods.

In the book’s introduction, Ahamed mentions that the idea for the book came to her while doing an essay on the portrayal of menstruation by men and women writers. Drawing a line between the male and female gaze, she writes in her essay, “Female authors, when writing about menstruation have shown a sensitivity to the cultural taboos surrounding it… They have illustrated it as a time of healing and female solidarity… In contrast to this empathetic representation, male writers have presented their female protagonists as objects of male fantasy, obsession and voyeurism.” She also says that depiction of menstruation in fiction provides a window to the anxieties felt by women and the discomfort of the society towards menstruating women.

Ahamed’s interviews also touch upon the work being done by different people to spread awareness about menstrual hygiene and lift misconceptions regarding menstruation. The founders of the Goonj initiative consider menstruation rights as not just a woman’s issue but a human rights issue and seeks to restore women’s dignity by increasing awareness and making affordable period products available. The creators of Menstrupedia turned to the comic book format to ensure that children learn about the biological process of menstruation in an engaging way while Aakar foundation’s Anandi pads are not just affordable but also environment friendly.

Granach Baloch writes about her experience of conducting the first ever menstrual workshop in Baluchistan going against the code of honour of her community. In her essay, Tashi Zangmo says that even though extreme gender exclusion is not prevalent in Bhutan, deep rooted negative attitudes about menstruation persists in the country. She mentions how training and advocacy related to reproductive health with the support of the government and UN agencies besides activists have helped in bringing about a positive change with regard to menstrual practises and reproductive health facilities.

In her essay, Lisa Ray touches upon the forced menopause faced by her due to her treatment, poignantly relating her journey of finding solace within the community of women. Ahamed talks with women incarcerated in jails, sweepers, women living behind shrines, working in factories, recording their loss of privacy and the unsafe methods they are forced to adopt while menstruating.

Period Matters provides a wide-angle view of the narrow means with which menstruators in South Asian countries are forced to deal with an involuntary body function. In addition to the interviews and essays, fiction, poetry, and art in the anthology capture the discourse on the gendered compulsions and problems faced by young girls and women, highlighting the immediacy of the issues.