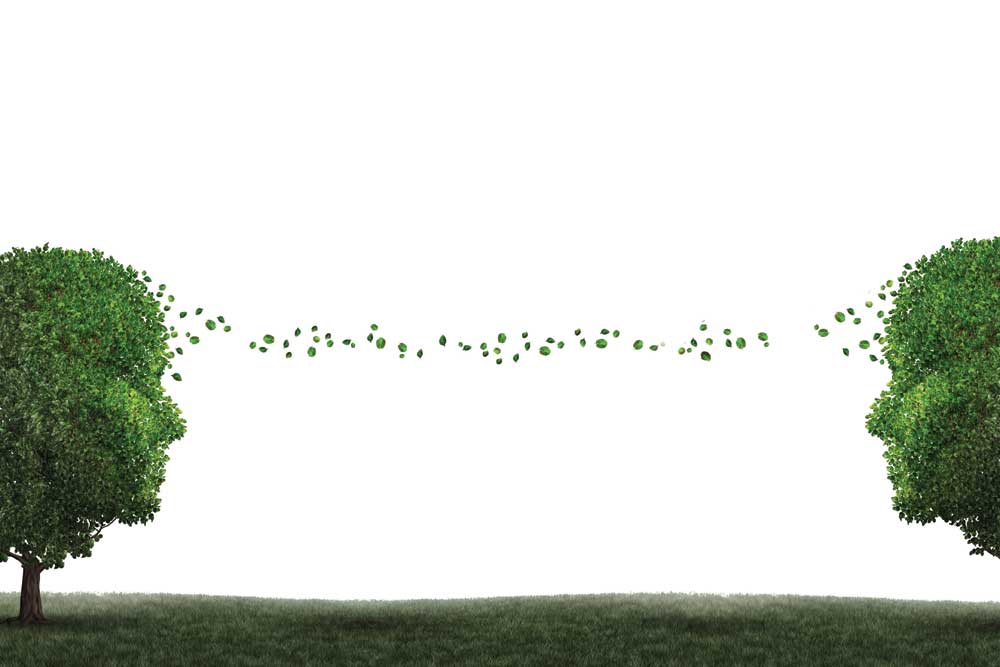 WE TEND TO take trees for granted, because, well they’re always stuck in the same place for all our lives—and much longer—unless of course we chop them down or they fall over in a storm or die (slowly) of some unseen cause. And most of the time they don’t seem to be doing anything, except standing there waving their leaves and branches in the breeze. For a generation that’s addicted to instant gratification, they may seem, dare one say, boring.

Ah, but that’s only because trees are slow and deep and only now—thanks to the persistent study and observations by people like Peter Wohlleben—are revealing their incredibly complex and almost sentient secret lives. Wohlleben spent his career in the forests of his native Germany, basically assessing trees for their timber potential, and he gradually got an idea of what trees have been hiding from us all this time. Indian readers might wonder how relevant his discoveries are because he writes mainly of the trees found in the old growth and plantation forests of his native Germany and Central Europe: oaks, beeches, birches, spruce, firs, pine and so on, which have a relatively limited range in India—confined mainly to mountainous regions. But I guess, what’s good for the oak is good for the neem and peepul too, and at any rate, this book can serve as a template towards the better understanding of our ‘native’ species.

Another thing that might put some readers off is that (as Pradip Krishen mentions in his ‘Introduction’) the book’s name is unfortunately similar to that of Peter Tompkins’ The Secret Live of Plants (1973), which raised many botanical eyebrows. But thankfully this book is much more grounded in hard science and less so in sentimentality. Wohlleben writes with affection and wonder, not with cloying sweetness.

There’s an astonishing amount of fascinating information packed into this book. At first glance, much of it seems incredible and exaggerated and even rather anthropomorphic (botanically speaking), but when the explanations are provided, appear to be so rational that you wonder, ‘Why the heck didn’t I think of this before?’ Trees communicate with each other, even share nutrients with each other, warn each other of danger; grand matriarchal trees look after their babies, trees learn from bitter experience, they avoid incest, some migrate, some (in cities and parks) grow up like ‘street kids’ and many may live for 500 years or more.

One of the most amazing recent discoveries was that of the vast, underground symbiotic fungal (mycorrhizae) system that connects the roots of trees, enabling them to exchange nutrients and issue warnings to one another when they comes under attack; it’s been called the ‘wood wide web’ and like the other one, is hugely extensive. Trees that are not doing well or are nutrient-deficient are ‘helped’ by others through this network. These fungal hairs actually burrow into the roots—and oh yes, they tax the trees at a rate of as much as 30 per cent, taking carbohydrates and sugar from the tree in return for their services. Not all fungi are friendly, though; some are the biggest enemies of trees, just waiting for a breach in the tree’s defences (a tear in the bark) to enter, so they can begin rotting it from inside out.

Another fact that widened my eyes was the assertion that deep shade and slow growth were indeed very good for baby trees—those which grow under their mother’s canopy. Only about 3 per cent of sunlight percolates down to the forest floor, and in this dim light baby trees are hard-pressed to grow fast (as perhaps they would like, being teenagers and all). But what seems ‘bad’ for you (like all bitter medicine) is actually good for you. In slow-growing trees, the trunk grows tightly, highly compacted and strong, with little air-spaces between the cells; in fast-growing trees, there are larger air spaces which makes fungal attacks easier. It’s only when the mother tree dies and falls that the youngsters can revel in the sun and shoot up, and by this time they’re hardy young buggers (maybe already 100 years old) ready to take on anything. Fast growers topple easily.

In some forests, the trees virtually ‘conspire’ together to survive. Beeches and oaks for instance, might remain seedless some years, causing the population of browsers—deer and their ilk—to crash. The next year they lay out a bumper crop, too much for the surviving animals to consume and thus leaving many beechnuts and acorns strewn around, ready to sprout. If there had been a baby boom of deer that year, the animals would have cleaned up and there would be no next-gen of oaks and beeches.

Trees learn from experience: Wohlleben writes that a tree hitherto used to a plentiful supply of water and extravagant in its use, would suffer considerably in a drought year. If it were to survive this, it would remember the harsh experience and in future, behave in a far more frugal manner, ensuring there is a reserve stored beneath its roots, just in case—something we profligates could perhaps learn from. Something else we (especially the mandarins in power who are hell-bent on felling everything in sight) would be sensible to remember is how vital forests are for rainfall in the interiors. Moist air hitting the coastal forests condenses and falls as rain here; some evaporation is returned through transpiration by the trees and is blown further inland where the process is repeated, the rains thus being drawn further inland to areas which otherwise would have received no rain.

As for trees in city parks and avenues, Wohlleben calls them the ‘street kid’ equivalent of trees: Not only are their roots shallow, but are not allowed to spread because of obstructions such as pipes, cables and building foundations. Then there’s traffic pollution the leaves have to breathe day in and day out, and the hard tarmac and concrete do not cool down at night like a forest floor does. Park trees are, of course, ‘spoiled’ by us initially, given lots of water, fertilisers and TLC, and grow like ‘doped up bodybuilders’— short and squat, with low crowns, standing on highly compacted ground which does not allow water to percolate and are very unsteady on their pins. Then one day, the care and lavish watering stops and the trees aren’t geared to handle life on their own. (Sounds familiar?)

Another puzzling question that Wohlleben tackles: why are trees so long-lived and how does it help in their evolution? A quick turnover of generations means there are better chances of genetic tweaks and modifications to ensure survival of a species: those most suited to the environment survive. Bacteria and viruses, as we all know, mutate with changing circumstances, often to get the better of antibiotics and vaccines. Trees may be 100 years old before they have their babies and pass on genes. The secret of their success is simply that each individual tree is almost as genetically different from another of the same kind as to almost be a species in its own right. Thus, in a forest, some trees (all of the same species) may be better equipped to handle the cold, others to deal with heat, still others do okay when there’s drought; basically there are some trees around that will survive whatever contingency or emergency that may occur, thus ensuring the survival of the species.

And, oh yes, trees do avoid ‘incest’. Trees which have both male and female flowers open these out at different times, others use the wind to blow their pollen away, and if the worst does happen: a tree pollinates itself, it genetically recognises what’s going on and stops any further nonsense by sealing the tubes down which the pollen descends, ensuring no fertilisation can take place.

Apart from the treasure trove of information it provides, what’s the biggest takeaway from this book? Maybe it’s a reminder that we should slow down the frenetic pace of our lives, which makes us skim superficially over anything worth a deeper look, and which gives us hypertension, road rage et al. Trees are barely out of their childhood when they are 100 years old—and know how to deal with our rocketing BP too. Take a walk in an undisturbed forest and breathe deeply, and you’ll be lifted with the ‘feel-good’ factor that the trees spread around—your BP will be back to normal.

But yes, thanks to what we call ‘development’ it may be virtually impossible to find that pristine, untouched forest first.

Ranjit Lal is an author and environmentalist