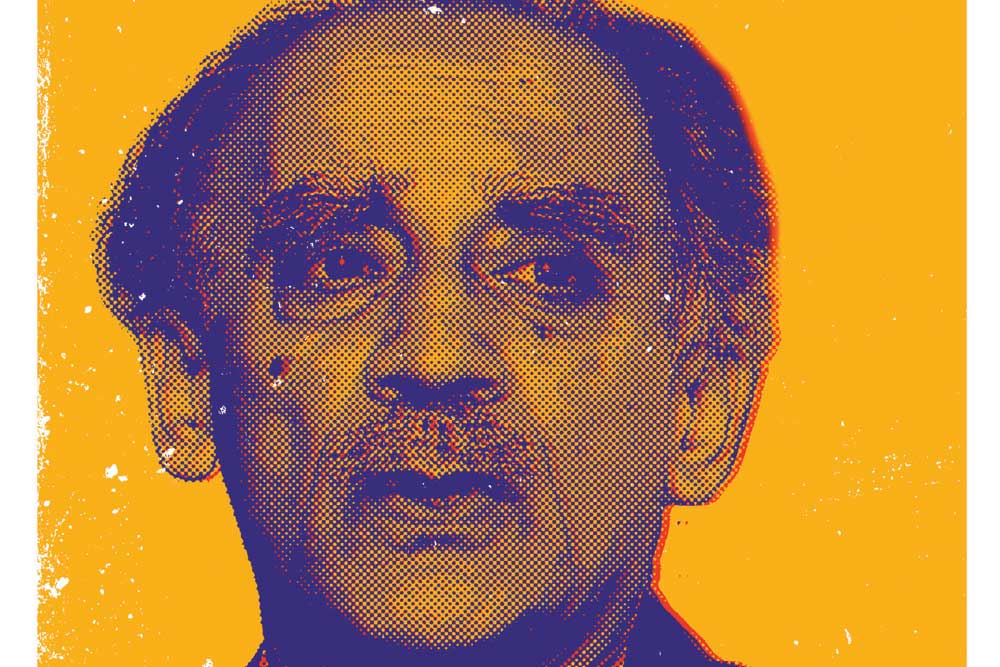 ARUN SHOURIE HAS not always offered the most balanced judgments. His writings can be undermined by their polemical form and exaggerated character. His good and valuable insights are often lost in narratives that seem unruly. Yet, Shourie occupies an important, even unique, place in Indian intellectual life. This fact is not explained merely by his remarkable productivity—Shourie has authored more than 25 books. Rather, it rests on his capacity to consider questions and problems in direct terms, and venture suppositions that would be uncomfortable to many. Even when he is wrong— as he often is—Shourie tackles serious and profound matters, offers critiques that are unafraid, and goes where not all would be ready to tread.

Shourie’s new book, Anita gets Bail, is a fine example of this capacity. It begins in a dramatic fashion: a policeman shows up at Shourie’s home with an arrest warrant for his wife, Anita. Shourie proceeds to paint a Kafkaesque narrative. His wife, who suffers from Parkinson’s, is charged with illegal construction on land that she had once owned but long sold. Hearings are fixed for particular dates, but the case somehow comes up on other dates. Witnesses fail to appear, evidence is not presented, one adjournment leads to another. For a decade, Shourie’s wife had received notices from the Haryana State Pollution Control Board seeking an explanation for construction that never occurred. The replies were consistent and categorical, but the questions seemed unmoved. Matters had now reached the judiciary. The case in court proceeds lethargically, but the facts are too straightforward to provide a surprise ending. An acquittal occurs after six years.

Anita gets Bail then turns to a somewhat different legal episode: the famous Jayalalithaa case involving disproportionate assets. Shourie writes of the trial judgment that found her guilty, the Karnataka High Court decision that reversed the finding, and the final Supreme Court verdict that reinstated the guilty outcome. For Shourie, the trial and apex court verdicts were both a ‘model of meticulous examination’ of the matter at hand. The High Court decision was, on the other hand, ‘as much a model of misrepresentation and distortion’. The High Court, Shourie notes, did not simply make a simple mathematical error, as several media reports suggested at the time. More seriously, it ‘inflated the income’ of Jayalalithaa and others involved; it ‘deflated the expenses they had incurred’; and, finally, it ‘drastically reduced the value of the assets they had acquired’. This claim is mapped out through a careful unveiling of facts. We are shown how loans were tabulated and added, forms of ‘double-counting’, the inclusion of amounts that were not disbursed, etcetera. The particular details are irrelevant here; the basic point is to demonstrate how they seemed irrelevant even to the High Court.

If the judiciary has acquired attention because of breakdown in legitimacy and performance suffered by representative institutions, Shourie makes it clear it is as broken as any other branch of the Indian state

Analyses of legal matters often present a close reading of judgments. To Shourie’s credit, he does more. The final Supreme Court judgment, he observes, is delivered two decades after the charge- sheet is filed. In the interim, every fact external to the law appears to change. Jayalalithaa returns as Chief Minister, the prosecutorial team changes, witnesses alter their stance, and so forth. The Supreme Court transfers the case to Karnataka but, alas, matters scarcely improve. Defence tactics find new ways to delay the trial. The prosecutor in Karnataka, whom Shourie views favourably, eventually chooses to leave the case and a new prosecutor with an unestablished record is appointed. The prosecutor’s actions leave much to be desired but attempts to remove him are challenged, remarkably enough, by the defence. One series of events follows another, the case barely advances and is hostage to a host of different institutional failures and legal tactics.

The remaining chapters in Anita gets Bail touch upon various other legal affairs. These include matters that have been the subject of much recent public attention, such as the contempt-of-court saga involving Justice CS Karnan and the controversy surrounding the death of Justice Brijgopal H Loya. The episodes reveal facts that are familiar to anyone who has engaged even mildly with the judiciary, though are important enough to merit rehearsing: the utter collapse of the police and the criminal justice system; the tragic situation of the subordinate judiciary; the extent to which lawyers bear responsibility for what occurs; and the fact that the apex court itself can hardly claim any high ground. It is hard to find anyone (or any institution) that comes across well in these narratives, though now and again Shourie does mention the lone rare efficient and honest individual (sometimes a judge; sometimes a civil servant; sometimes a lawyer) who does what he can.

There are other features of the Indian judiciary that Shourie identifies, ones that are well-known but less frequently discussed. The most important example is the writing of judgments and decline in judicial reasoning. The lack of discipline that characterises judicial opinions is brought into sharp focus by lengthy quotations: judges refer to sources that have little significance; narrow legal questions are seen as invitations to offer theories on matters large and small; there is the stunning practice of ‘quoting oneself quoting others’; and all of this occurs even in concurring opinions. Often, the reader sadly comes to realise, there is very little law and very little judgment.

Shourie has turned to the pathologies and problems of the Indian judiciary before in two earlier books, Courts and their Judgments and Falling over Backwards (the first, like Anita gets Bail , was broad-ranging; the second was more narrowly focused on the question of reservations). Like those works, Anita gets Bail too leaves us with very little to feel pleased about. Shourie recognises that, in the final analysis, all he can do is present an account of the situation. The solutions that he offers—from increased attention to case durations to changes in specific procedural rules to the better monitoring of the implementation of verdicts—will surprise no one. The reality, he knows, is that there is little ideological support or any incentive to reform the Indian judiciary.

If the judiciary has acquired attention because of a breakdown in legitimacy and performance suffered by representative institutions, Shourie makes it clear it is as broken as any other branch of the Indian state. He is aware that the judiciary can bear only limited responsibility for the present state of affairs. The real blame lies in the broader patterns of politics. The story of the Indian judiciary is not necessarily more interesting or any worse than the drawing one may sketch of any of our public institutions. But, on reading Anita gets Bail, it does seem that all of India’s struggles and deviances, its absurdities and ironies, and its egregious realities somehow play out in one form or another in the courtroom; the space is a symbol for everything that has gone wrong. The place that was meant to be—in Ronald Dworkin’s memorable phrase—the forum of principle would appear to have descended into being a forum of perversity.