The Write Stuff from IIT and IIM

Move over Chetan Bhagat. There is a new crop of BEs and MBAs churning out fiction, and not just about life at the IITs and IIMs. 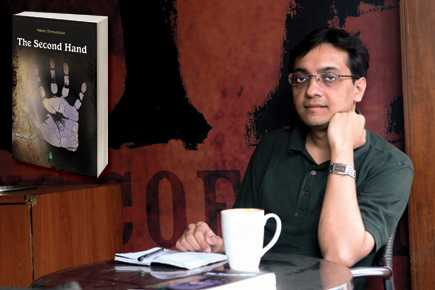 There is a new crop of BEs and MBAs churning out fiction, and not just about life at the IITs and IIMs.


In India, literature was once the supposed domain of the BA, MA and poetry-writer types. No more. These days, you’d be given to think cracking the IIT-JEE or Cat are the prerequisite to getting between covers. Sounds weird? No. Not if you know that some of India’s newest fiction writers in English are high-flying products of our honcho-producing pressure-cookers—the IITs and IIMs. If Chetan Bagat was perhaps the first of this lot, there seem many others following suit.

Figure this. Some of the latest guys and gals to come out with books are exactly the sorts your middle-class parents dreamt you would become. These men and women, many with white-collar corporate jobs, are churning out novels that would startle students trained to produce or appreciate them. You’ve got to learn the ‘write’ way from these IIT and IIM alumni. These new kids on the book bloc are Karan Bajaj, Sangeeta Mall, Prashant John, Nilesh Srivastava, Paritosh Uttam, Swati Kaushal, Sidin Vadukut and Anirban Mukherjee.

While most of these writers acknowledge Chetan Bhagat’s success with writing about the campus experience, their link with him ends just there. These are people who would have written regardless of Bhagat. Take, for instance, Paritosh Uttam, an alumnus of IIT-Madras who has written Dreams in Prussian Blue, a book in a series called Metro Reads, launched by publisher Penguin. “Chetan Bhagat made Indian writing in English popular in India, just like Rushdie made Indian Writing in English (IWE) popular. But I won’t say he has influenced my writing… Sometimes, when you read a gripping passage by a great writer, you exclaim, ‘How I wish I could write like that!’ I haven’t felt that way reading Bhagat, but I do feel, ‘How I wish I could sell like that!’”

The latest sensation with IIT-IIM pedigree to have had a well-noticed debut is Karan Bajaj. He answers the question of why there have been works of fiction coming out of this nurturing ground of engineers and managers. Bajaj works for an investment consulting firm in Washington DC, and his first book Keep Off the Grass hit the Indian bestseller charts last year. His job profile is fast becoming typical of many Bhagat clones. “Aren’t all IIT and IIM grads writing now?” he jokes, when posed the Bhagat query. “But I thought I was already living a very interesting life that I wanted to write about. Backpacking across countries, my own Army background where we shifted to various parts of the country and my own peripatetic life drives me into writing,” says Bajaj. Bhagat, in a sense, is a figure more held aloft for his saleability and savvy than literary emulation.

For others, there are myriad reasons. Bombay-based Sangeeta Mall, who studied at IIM-Bangalore, went on to depart completely from her entrepreneurial background. From the stress and highs of the corporate world, she succumbed to the one passion that had captivated her since childhood. To the surprise of those around her, she applied for a creative writing post-graduation course at the University of Pittsburgh in the US, and wound up her NIIT computer centre in Bombay which she had been running for 12 years. The Master’s dissertation in the writing programme formed the fulcrum for her first novel Cloud Nine Minus One. Again, the connection to the jet-setting life of an IIM-type adheres. Her novel looks at what an NRI woman in America makes of her return to India for a college (slightly like an IIM) get-together where she may meet an ex-flame. Mall has fond memories of IIM, and they aren’t related to grades. “People tend to underestimate how internally diverse IIM can be as an institution,” she explains. “I loved the library and it had a pretty hefty literature collection.”

Plus, there’s the meeting of minds. The fact that the IITs and IIMs are also places that have a life outside of engineering and management is emphasised often. Prashant John, a product of IIM-Ahmedabad who is out with his first book Second Degree (which satirises the B-school experience), swears by the other library that his school offered its inhabitants—the archives of the mind. “I am in awe of my alma mater. It instills out-of-the-box thinking in you. And anybody who can survive the IIMs has to be really good, there is no other way! I learnt the art of disciplined writing at IIM. The need to produce quality work under tremendous time pressure is implicit to survive the course. All these things have gone into my writing,” he explains.

Anirban Mukherjee who has written his first novel, Love: A Rather Bad Idea, swears by the all-round potential of his IIT-Delhi friends. The five years at engineering clearly took him down the writing path too. “I found that students and teachers were generally well-read or very interested in reading at IIT—and not just stuff related to their own fields.”

IIT-Madras alumnus Uttam sheds more light on the catholicity of an IIT campus. “I was not a five-point someone, but a seven-point someone. In IIT, in my final year, I took a Humanities course under one Professor B Subramanyam, where he spoke about many writers and world literature. That helped me realise what true literature was about, and the kind of reading I ought to be doing, and perhaps indirectly, the kind of writing I would do later. It was also one of the few courses at IIT where I got the top grade and marks in class. Perhaps, that was a pointer to me where my heart was calling,” says the software engineer from Pune.

Reminisces journalist, well-known blogger and creator of whatay.com, Sidin Vadukut, an IIM-Ahmedabad graduate who is just out with his first book, Dork: “IIM-A gave me a good, critical audience who read things I wrote and gave me feedback. A lot of our casual notice-board writing was of a great quality. And especially for aspiring humour writers, it was a great place. We had electronic notice boards for all kinds of humour from the pathetically PJ-ish to the pathetically adult,” he guffaws.

A lot of the structures and theorems learnt in the classroom fed the work of words. Uttam even imagines his stories in scientific terms. “I think of the beginning, the middle and the end as different points on a line. Then I think of different ways of going from point A to point B in the story. I draw a timeline graph of events or chapters to get the chronological sequence. I use a top-down approach while thinking of the main plot points and the relatively minor events,” he expounds.

Obsession with the written word has been a long affliction. Sidin Vadukut’s first published piece was for his school magazine and it was called The Autobiography of a Cardigan. Uttam has been writing short fiction and non-fiction for years in webzines and Indian publications. One reason for his love of the written word was his growing up away from urban India. “I grew up in Sriharikota, India’s satellite launching station, which is an island, and not just in the geographical sense. There were hardly any avenues for entertainment. In that kind of atmosphere, reading and writing were positively encouraged,” he says.

Nilesh Srivastava, an alumnus of IIM-Calcutta, is another man with a non-urban background. He finds the village and the town very confusing places and that informs his writing. His first book, The Second Hand, brought out by Cedar Books, is one of the few narratives produced by these IIT-IIM writers dealing with life in interior Bundelkhand. He had been scribbling for ages, and recalls labouring over school essay competitions as fondly as the assignments at IIM. “I developed a passion for reading Hindi literature at that time. That surged when I would go home for vacations, and whenever I found time while studying at IIM-Cal, that continued. I found great insights into my own condition in Hindi writers,” he says.

Nearly none of these writers is in it just for the bucks. They may aspire to become like Chetan Bhagat, but that’s not the sole aim. Most admit that even if their books do well, it doesn’t mean they’ve entered the list of Forbes billionaires. And they’d continue writing even if no one noticed their work.

So what does this lot make of their IIT and IIM degrees? “The IIT degree helps in landing a job even if you don’t perform too well in your interview,” jokes Anirban Mukherjee. For Vadukut, the IIM degree works as “an insurance policy”. Mall says she would have stuck to a corporate career if she wanted to make more money—not writing. “At this point, I look at the money as a welcome bonus. The money I have made from writing can hardly pay for even my home-loan EMIs! Creative satisfaction is my main motivation,” says Uttam.

And lest it be asked, none of them had it easy getting into print. “Yes, there’s a market for our stories. But the IIT or IIM degree doesn’t make it easy to be published,” says Mukherjee. Early on as a writer who wrote for several publications, Vadukut saw some dark days. “Right now, in 2010, I write for money and creative fulfilment. I am fortunate to be in a position where I can write what I like and be paid for it. It wasn’t so earlier in my career. And I don’t even want to go into those months. Money is important, of course. But I am convinced good work pays for itself,” he muses.

Indeed, that seems to be the case. Almost all these writers are at work on their next books. Some are eager to get out of writing about campus life, and some eager to get into it. The IITs and IIMs have a hallowed status for most Indians as scientific and management institutions. In time, they may even produce people at the forefront of popular culture.