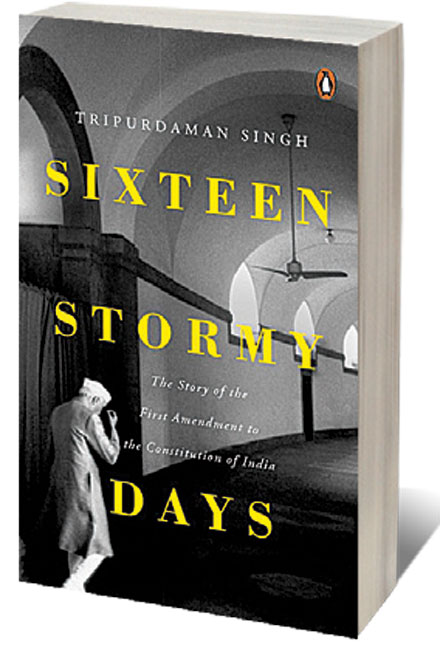 Sixteen Stormy Days: The Story of the First Amendment to the Constitution of India Tripurdaman Singh
Vintage
288 pages | ₹ 599 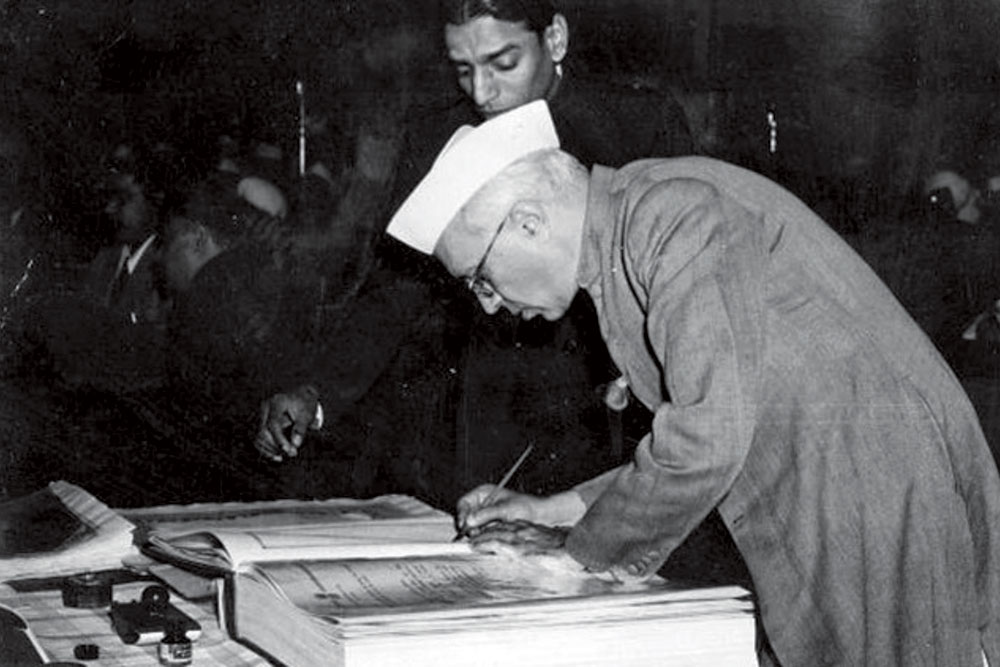 Jawaharlal Nehru adds his signature to the Constitution, 1950


THIS CONCISE, VERY readable and exhaustively researched book tells the story of a hugely important but well-kept secret in our constitutional history. Those shouting loudest about the abrogation of our civil liberties by Hindu chauvinists today might do well to ponder how the ground was laid for them by our first, reputedly secular and democratic Prime Minister Jawaharlal Nehru. Hardly had the ink dried on our Constitution, when, in the summer of 1951, Nehru moved the long forgotten First Amendment, undercutting the Fundamental Rights guaranteed in the Constitution and the powers of the judiciary to enforce them.

Moving the amendment on the May 16th, 1951, Nehru declared that Fundamental Rights such as rights to property and freedom of expression were ideas of the 19th century, now overtaken by 20th century ideals of social reform enshrined in the Directive Principles of State Policy, which reflected the radical programmes of the ruling Congress Party. The political compulsions behind this rhetoric lay in the stalling of the Government’s social and economic policies by a wide-ranging coalition of litigants including zamindars, businessmen, newspaper editors and communist campaigners, all of whom had successfully challenged Central and state legislation in the courts, thereby limiting attempts to curb civil liberties, regulate the press and confiscate zamindari lands without proper compensation.

That Nehru should have chosen to prioritise such socialist reforms so dear to his heart is no surprise. He had, after all, rejected power sharing with Jinnah’s Muslim League, partly because it represented what he considered conservative elements. Nehru had preferred Partition, so that the Congress led by him could be master in its own house and free to implement its socialist policies. Despite Nehru’s frequent commitments to Westminster-style parliamentary norms, he had little patience with multi-party democracy. His model of centralised state planning owed more to the Soviet example of one-party rule. The First Amendment was instrumental in constructing such a one-party state by neutralising at one stroke all the political opponents of left and right who might have clubbed together in effective parliamentary opposition.

What is surprising is how Nehru overcame reservations among some of his own close colleagues and parliamentary backbenchers and faced down opposition from some fearless critics. Foremost among them was Sardar Patel, who died just a few months before the Amendment, but whose reservations had been overcome by his desire to suppress communist insurgency without judicial intervention. Similar concerns may have persuaded his successor as Home Minister, C Rajagopalachari, into supporting Nehru, surprisingly so, given his later championship of liberal opposition by the Swatantra Party. And then there was Nehru’s Law Minister, BR Ambedkar, chief architect of the Constitution and once the champion of its guarantees of Fundamental Rights, which he had formerly described as “the very heart and soul of the Constitution”. His support for Nehru’s Amendment was secured by the promise of reservations in public services for Dalits, likely to have been found ultra vires of fundamental rights to employment.

Finally, there was the President of the Republic, Rajendra Prasad, himself a small zamindar and staunchly opposed to measures to sweep away zamindari without proper compensation. The President, we learn from Singh’s revealing account, made several attempts to advise and warn his ministers against this assault on Fundamental Rights, although he stopped short of a public challenge after Nehru threatened to resign and force a constitutional crisis.

It’s little realised today that the amendment, virtually a second constitution, created a special schedule where laws could be placed to make them immune to judicial review, according to one jurist ‘an obscenity created by wilful resolve’, the mother of all subsequent breaches of our fundamental rights.


Singh deftly paints a picture of the heroic if disparate opposition the Bill provoked, ranging from SP Mookerji and his Hindu Mahasabha to remnants of the Muslim League, representatives of the zamindars, socialist politicians like Jayaprakash Narayan and Acharya Kripalani and communist journalists like Romesh Thapar. Some of the Congress’ own backbenchers questioned the wisdom of a provisional parliament, elected on a limited franchise in 1945 as the Imperial Legislative Assembly, enacting such a momentous measure. But when the final vote came, most fell in line or abstained.

Ironically, a thunderstorm broke over New Delhi as Parliament debated the Bill, with MPs drenched in rain through open skylights and the chamber plunged into darkness by an electrical failure. Singh leaves us in no doubt that this battle, fought almost 70 years ago, has cast a long shadow on our post-independence politics, providing the constitutional basis for elective, one-party dictatorships under Nehru, his daughter Indira and the BJP today. What was lost in its assertion of unlimited parliamentary sovereignty was the independence of the judiciary and the rights of the individual against the state. It has meant that the executive arm of the state, provided it has the necessary parliamentary numbers, can expropriate private property, nationalise private companies, ban newspapers, arrest dissidents without trial and impose caste-based quotas on employment—and all this in the name of democracy.

Singh rightly dismisses the tendency of some historians to blame these emergency powers on a colonial hangover. ‘Far from being a simple remnant of colonialism,’ he says, ‘sedition is an outcome of the First Amendment of the constitution, and the Nehru government’s desire to clamp down on critical voices…’ He points to the eagerness of Congress leaders to resume the autocratic powers of colonial rulers to suppress inconvenient opposition and push through their own social and economic agenda as the sole voice of the nation. The result may have been the death knell of the old landed aristocracy, but it has also seen the rise of corrupt, new elites based on a competitive scramble for job reservations for proliferating ‘backward’ castes.

Although Singh does not say so, the results of Nehru’s emasculation of the Constitution and the judiciary’s power to enforce it are amply demonstrated today in the Supreme Court turning a blind eye to the subversion of fundamental freedoms in Kashmir. There is surely a moral in this for true liberals to seek new limits on the overbearing Indian state, whether run by Hindu chauvinists or the Congress.