The Spy Who Came From the Cold 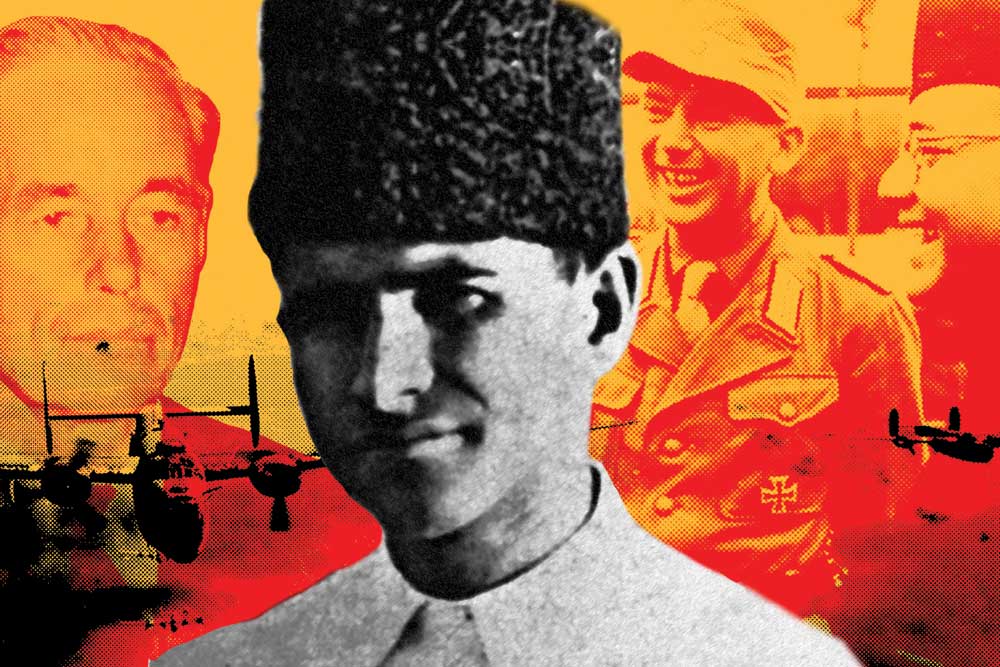 WAY BACK IN 1936, a young English aristocrat named Peter Fleming travelled across Turkistan along with Ella (Kini) Maillart, a member of the Swiss national sailing team. Both wrote books about the adventure. Fleming’s News from Tartary was a huge hit. So was Kini’s Forbidden Journey, brought out at a time when travel was becoming increasingly popular amongst the young generation growing up on either side of the Atlantic in the years between the two Wars.

However, 1939 changed all that and it was to battlefields around the globe that many of those youngsters travelled. Fleming was no exception. He joined the Grenadiers but was lucky (or unlucky) to spend the greater part of the War heading the Deception Division of the British Indian Army from the relative comfort of the Viceregal Lodge (now the Rashtrapati Bhavan) in New Delhi. He handled several important deception operations including the much-told story of how he tried to convince the Japanese that Lord Wavell, then Commander-in-Chief of the Indian Army, was seriously wounded. The Japanese were not alert enough to notice the tell-tale evidence that Fleming left behind for their benefit. Fleming seems to have had better results with Operation Silver, which is the subject- matter of Mihir Bose’s enormously researched book The Indian Spy on Bhagat Ram Talwar, whom he calls the most remarkable secret agent of World War II.

The author had written the book The Lost Hero in the 1970s about Subhash Chandra Bose. That is when he became aware of the role Bhagat Ram Talwar was said to have played in helping Subhash Chandra Bose escape from India. In 1976, Talwar wrote about his own life (The Talwars of Pathan Land and Subhas Chandra’s Great Escape). Naturally, the version of a man who claims to have fooled the spy handlers of five countries could not be taken at face value. However, in subsequent years, the opening of files to the public relating to Indian Political Intelligence and Special Operations Executive in UK facilitated research into Talwar’s wartime activities. The result is a well- documented, fascinating but sometimes confusing, addition to the literature on intelligence operations.

Part of the confusion flows from the fact that the nom de plume Silver, which was obviously given by British Intelligence, is used right from the beginning of the narrative, when the Italians, the Germans and the Russians were running Talwar. (The author says that the nom de plume was based on the real name of a senior British Intelligence Officer, which, if true, is surprising. Code-names are not meant to be give-aways drawing attention to intelligence officers handling sources). At other places, Talwar is referred to by his real name (Bhagat Ram) with his nom de plume (Silver) mentioned in brackets. In intelligence documents, the name of the source is never mentioned. This book is not an intelligence document, and hence, it would have been logical, and less confusing, if Talwar was referred to by his own name until the British took him over and named him ‘Silver’.

An interesting aspect about Talwar is that all his handlers were unhappy about him, and lost interest in him somewhere along the way. The Italians, of course, were the first to dump Talwar. As early as April, 1942, Pietro Quaroni who headed the Italian Mission in Kabul from 1936 to 1944 with the rank of Minister and had recruited Talwar to spy for the Axis powers after the Indian brought Bose to him in 1941, informed Rome that ‘.. it is certain that he has moved on to serve the enemy.’ In March 1944, the British assessed that the Germans were no longer interested in Talwar. The German, Witzel had written to Talwar in May 1944 accusing him of allowing ‘a third party to know the innermost secrets of the whole connection.’ By May 1945, George Hill, the British Liaison officer in Moscow recorded that ‘the NKVD was no longer interested in Bhagat Ram (Silver’s) activities.’ Around this time, Silver managed to establish contact with Inouye in the Japanese embassy. But Mihir Bose has not been able to chronicle any worthwhile job that Silver did for the Japanese, except passing on a document created by the D Division and doctored by the Germans.

Strangely, for a spy who is rated so high by the author, several of the high-level case officers who handled Talwar have not mentioned him in their memoirs. Hill of the SOE, who was based in Moscow and ran the Silver operation along with the NKVD did not. The Italian, Quaroni, did not mention Talwar when he was interrogated by the British. Talwar himself did not mention Fleming in his memoirs. My former senior colleague, Vappala Balachandran points out that there is no mention of Silver in the authorised history of MI 5 compiled by Christopher Andrew. Similarly, there is no mention of Silver even in the MI 6’s official history written by Keith Jeffery. However, the documents that Mihir Bose accessed at the British National Archives in Kew and at the Italian Foreign Office in Farnesina did apparently have cables mentioning Talwar, which form the research backbone of Bose’s book.

Hence, Bose undoubtedly has good reason to characterise Talwar as the most remarkable secret agent of World War II. Thaddeus Holt also refers to Talwar as ‘the great double agent Silver’ in his authoritative work The Deceivers: Allied Military Deception in the Second World War. Yet, it is clear that Talwar broke most of the rules of tradecraft and yet managed to survive. It also seems to be a fact that those handling Silver did not insist on the classic rules of tradecraft being followed and were rather lax in protecting the identity of the source. It would seem that there were few in the intelligence and police community in India who did not know that Talwar was a spy. There were also constant disagreements amongst the seniormost handlers of Silver, including his case officer William Magan of the D Division, his boss Fleming, whom Magan couldn’t stand and Sir Denys Pilditch, Director of the Intelligence Bureau. Cynics may say things have not changed much over the years!

It is difficult to resist the temptation to compare Bhagat Ram Talwar, ‘the most remarkable secret agent’ with Sidney Reilly, described as the ‘Ace of Spies’ in Keith Jeffery’s official history of MI6. Coincidentally, Reilly worked in Russia in the years shortly after the October Revolution along with George Hall, who later liaised with NKVD on Operation Silver. Born Shlomo Rosenblum in Odessa, he moved to England, married an Irishwoman and ‘reinvented himself as Sidney George Reilly.’ Courting the Bolshevik leaders and then their opponents, Reilly carried out operations calculated to bring down the Soviet government. He also proved a difficult entity for his bosses in the Secret Intelligence Service to keep under their control as he went about employing innovative tradecraft of his own in and out of Soviet Russia.

However, he was not as lucky as Talwar. He was lured back to the Soviet Union in 1925 by the Trust, a fake Russian monarchist organisation based in Paris and shot by the Soviet secret police. So, Talwar was, perhaps, smarter than Reilly!

In many ways, Bose’s story on Bhagat Ram Talwar is very relevant to the unrest that continues to haunt the tribal areas, now in Pakistan. Bose quotes from a remarkable letter that the Faqir of Ipi, then fighting the British, wrote to Jawaharlal Nehru, which shows how different he (the Faqir) was from the Islamic fundamentalists of our time. Bose also has some extremely interesting footnotes, in one of which he tells of how the teenage son of the rebellious Pir of Pagaro was kept, after his father’s execution, at a school in Middlesex. The boy became an ardent cricket fan and after Pakistan’s independence, became ‘the first living saint to play first class cricket’. Perhaps cricket could be the ultimate solution to terrorism!