‘The Sisters Think I’ll be Cursed for Writing’ 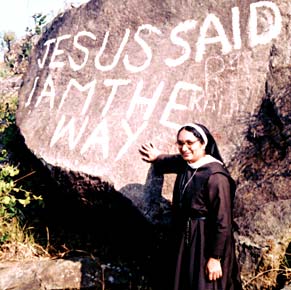 Sister Jesme’s confessions outside a church


Sister Jesme’s confessions outside a church

Sister Jesme took Kerala by storm earlier this year when she accused the clergy of sexual assault in her book, Amen—The Autobiography of a Nun, now translated into English. She speaks to Open of being branded insane for speaking out, her escape from the Church and her plans for the future:
Q When did you decide to write the book?
A I was in Delhi for six months last year gathering courage to leave the convent. Then I boarded the train for Kerala in a churidar—we’re not allowed these clothes and I would have been punished if caught. It felt like I was escaping in disguise. That’s when I thought I should pen down my experiences. The Church branded me as a mental patient. I wanted to write down everything logically, to prove I was sane.
Q Will you take legal action for assault?
A Not yet. Only if the Church does so. I am a spiritual person. I believe Jesus is fighting for me.
Q Do others who faced sexual harassment in the convent support you?
A No one will speak out. We were brainwashed. We’re told to obey, not to question. But I see a strong, brave Jesus always questioning. I couldn’t keep quiet. The other Sisters think a curse will fall on me for writing the book. I believe I’m giving courage to the others. I am willing to be a scapegoat, to be God’s tool, if something improves.
Q Was there pressure from the Church to not write the book?
A Mother Superior told me I shouldn’t publish the book. I told her she was too late. Then she told me to calculate the amount of profit, and they would give it to me. What foolishness was she talking! They have no right to tell me what to do. Now, there is a suppressed silence from the Church.
Q What are you planning on doing now?
A My mission is a refuge for women, from whatever caste or creed.
Q Has your faith dimmed?
A Even the clergy will not have so much faith. People used to tell me ‘Jesus is in Sister Jesme’s pocket’. It’s not like I don’t want to be a nun. Even in my next life, I want to live as a nun. But they were forcing me to take medicines. Only those who have the courage to speak up should become nuns. Why be afraid?