The Reverse Bank of India 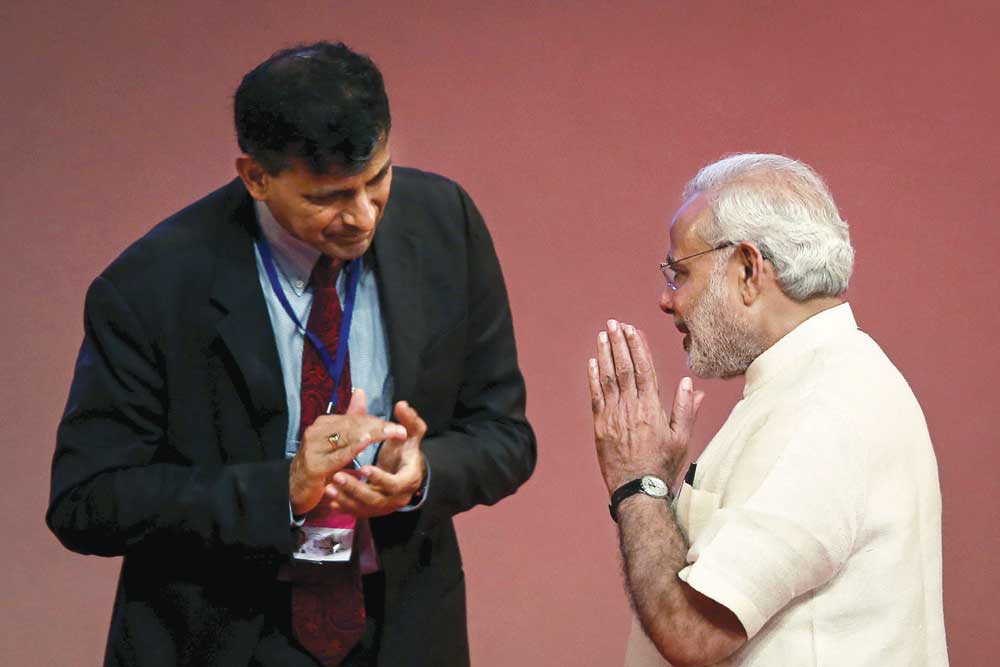 NOTE TO MYSELF: Do not try to browse a book by TCA Srinivasa-Raghavan on the Centre’s relationship with the country’s Central Bank in a few moments to spare between critical tasks; you’ll get godsmacked, sucked in, and left agonising over the Reserve Bank of India’s freedom and what it implies to India’s success as an economy. First, the smack: ‘If God did not exist, it would be necessary to invent him, said Voltaire.’ So begins Dialogue of the Deaf, and you’re reminded rightaway of Mark Twain’s Letters From the Earth as Srinivasa- Raghavan drum-rolls the droll attributes of divinity that define the modern conception of a central bank: since it offers ‘succour to sinners as well as the sinned against’, it’s seen as a ‘saviour’, and, like all such, it’s usually ‘ignored and reviled when times are good, but feted and prayed to’ once disaster strikes.

Unlike Liaquat Ahamed’s Lords of Finance, about central bankers in the West during the Great Depression, however, this book isn’t about the folly of an exalted authority in charge of money confusing ‘monetary’ with ‘arbitrary’. The RBI story differs, and sharply so. As an analyst, Srinivasa-Raghavan is known best for his knack of demystifying economics for lay readers on one hand while engaging economists for verbal brawls on the other—in keeping, of course, with the field’s aversion to single- handedness—but as an observer, he is too keenly steeped in the specifics of the relationship under scrutiny to hedge his words on what’s gone wrong and what right. Indeed, he owes part of this book to the access he was granted to RBI archives for him to help edit an official history of the institution, a project he quit upon finding himself unable to do an appropriately ‘dull’ job. Just as well. So, after crunching the world’s original idea of a central bank into a few pithy pages of wit and wisdom that feature witless sovereigns and wise-guy financiers, he turns swiftly to India’s own case. And this, if anything, reads like a tragedy, a tale of divinity devaluation, the RBI’s hand forced against its mind all too often by an even higher power. Yes, the harder-of-hearing in this dialogue of the deaf is the almighty government.

That a government should be at odds with its central bank is no eyebrow raiser in itself, given the divergence of their aims. The former wants more money getting around the economy to get itself re-elected, while the latter must keep its value stable, which often requires it to tighten cash supply and slurp some of it back. No doubt, a central bank has a vastly more complex job to do than that, and how it evolved from being an issuer of currency and watcher of inflation to a lender of last resort and then handmaiden of state policy is a story Srinivasa-Raghavan tells with eyerolls and irony: ‘There wasn’t much ‘evolution’,’ he writes, setting the tone for the rest of his narrative, ‘just a lot of convolution.’

The tone for that was perhaps set by an analogy once made by Montagu Norman, a 1930s governor of the Bank of England who compared a central bank for India with the wife in a ‘Hindoo marriage’: someone who’s at liberty to offer advice, but must ultimately do as told by her husband, the government. Norman had no clue which way marital equations in India would go, evidently, but how well has his formulation held up? “We are totally free,” as former RBI Governor YV Reddy put it, “…within the limits set by the government.”

Some of that ambiguity can be traced to the RBI’s 1935 inception as a private entity under the British Raj, which was keen to portray it as a guardian of people’s money—which it wasn’t. In reality, contends the author, ‘The idea of a central bank for India was born out of the need to facilitate the drain of wealth from India to Britain.’ This was done by the duplicitous overvaluation of the rupee vis-a-vis the pound, a ploy that Gandhi was to expose as extortionary. Even so, the legacy of working on an unstated agenda was to endure. After its nationalisation in 1949, the RBI would have to sign up for Nehru’s statist project of a centrally-run economy. With the West’s scramble against communism offering him the global academic ballast needed to bully it, the Reserve Bank had virtually no choice. John Maynard Keynes had argued that a state ought to spend money liberally borrowed from it to revive a depressed economy, with the fiscal deficit to be plugged later. It not only proved remarkably effective, it also lent itself to egalitarian ends as a tool to redistribute income rather than assets (take that, Karl). ‘What [Keynes] did not foresee, however, was that if an idea is good enough to fetch votes, politicians would embrace and distort it.’ It was almost inevitable that what began as a solution to a crisis ‘would eventually lead to fiscal policy displacing monetary policy as the instrument that calibrates the level of economic activity in a country.’ From Nehru’s reach for the commanding heights of India’s economy to Indira Gandhi’s depths of tax-and-spend intervention, the RBI of the era mostly had to listen silently and pray for relief from the inflationary effect of state profligacy. “The fiscal system,” declared Prime Minister Gandhi in her 1970 Budget speech, “has also to serve the ends of greater equality… irrespective of any immediate need for resources.” Noble intentions often make for ignoble economics, and where her deafness to dissent and contempt for market forces would later lead India is well known.

The most fascinating part of Srinivasa- Raghavan’s story is how the RBI reclaimed its voice—in fits and starts, and in a manner that evokes flashes of Yes Prime Minister. This is especially so of its backstage role in scripting reforms to restore financial discipline. Some governors come off well; a few of them, badly. Among the fiscal nudity callers of the imperial 1980s were Governor Manmohan Singh and Deputy C Rangarajan. In the latter half of the decade, the author says the RBI was seen as a ‘nag’ by Prime Minister Rajiv Gandhi, who was gleefully throwing cash around. By 1991, the country needed an international bail-out, with Governor S Venkitaramanan saving it from bankruptcy in what the author calls ‘perhaps the RBI’s finest hour’. It had been a reckless decade, ‘But as often happens in such cases, the experience of the 1980s resulted in the government realising, in the 1990s, that the time had come to stop treating the RBI as a bore and pay attention to it.’

Its hand freed to an extent, the Reserve Bank began snipping away at thickets of red tape that had suffocated banks in a mesh of well-meaning rules, and made the most of some leeway afforded by wobbly regimes at the Centre to shift its focus from micro to macro management. In turning the overall financial sector more responsive to market needs without letting prudential oversight slip, Bimal Jalan, Rangarajan and Reddy star as heroic governors in this book, with Raghuram Rajan just an earnest reformer who was not only lost on local intricacies but also less of his own man than made out to be. This seems unfair to a governor who won the RBI its current credibility as an inflation marksman, but then Srinivasa-Raghavan isn’t a writer easily accused of expressing safe opinions.

That fiscal slip-ups of the zips decade didn’t blow up into a financial crisis, for example, he attributes to an open economy no less than a stroke of ‘luck’ in the form of America’s post-9/11 favour, seen in a surge of investment inflows since. The dilemma spelt by this—of whether to control the rupee’s external or internal value—was a perplexity that the RBI may have managed to acquit itself on, but Srinivasa-Raghavan is scathing about its acquiescence under pressure to a huge stimulus package in the aftermath of the West’s Great Recession. ‘[Governor] Subbarao was practically bludgeoned into following a very loose monetary policy,’ in his view. ‘In effect, the RBI became the most articulate advocate of fiscal expansion and monetary laxity,’ he says, calling 2009-11 the Bank’s ‘most inglorious years’. Career Keynesians may bristle at this assessment, but even they’d find it difficult to deny the havoc that was wreaked on the country before efforts to contain prices could take effect. So disappointed— nay, angry—does Srinivasa- Raghavan sound at this abject surrender of principle that the existential question he poses the RBI appears to trace a curve of halo-diminishing rhetorical utility: does such an authority serve a purpose any longer or not? Does the Bank really want freedom? Or is it content to be pushed around and let governments take the rap if things go wrong?

No, this book doesn’t address such raging controversies of recent times as Rajan’s departure and the Government’s spiking of high-value currency notes. But a closer read would assure you that this doesn’t get in the way of its contemporary relevance. After all, Dialogue of the Deaf leaves you in no doubt about its stance on good governance. What it makes of clarion calls of the 1970 kind is amply clear too. And that’s enough for a good knuckle to your chin over questions of prosperity and providence.