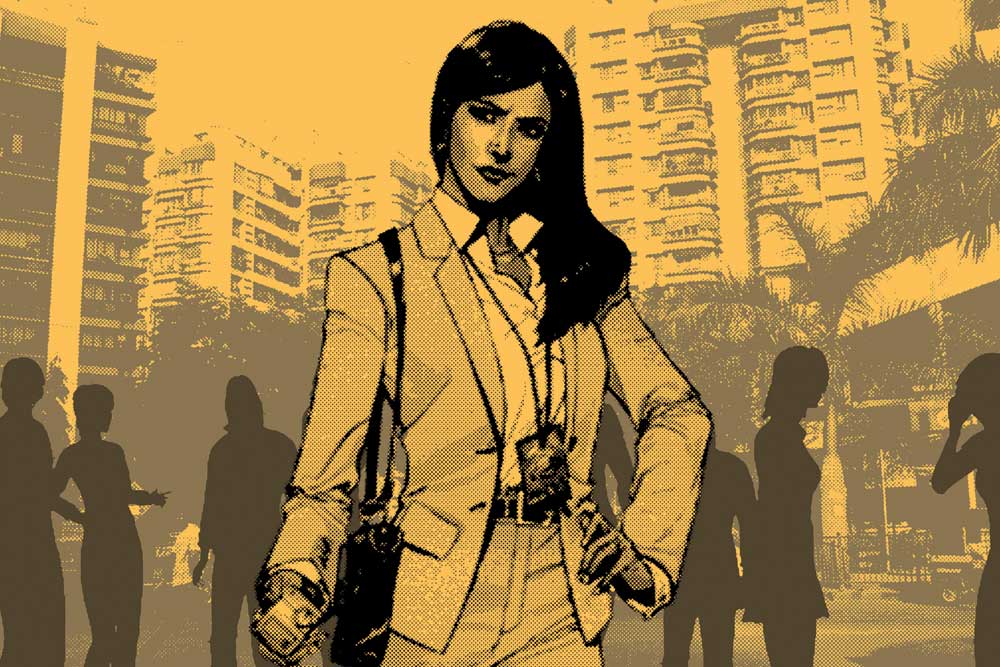 THIS HORRIFYING NEW book, with its juicy title (The Front Page Murders; Hachette; Rs 350; Pages 322), reads like a murder mystery and is guaranteed to provide morbid readers with as much titillation as any thriller. But what obviously separates it from a run-of-the-mill page-turner is the fact that it’s based on an actual case and that the protagonist we follow isn’t a sleuth, but crime correspondent Puja Changoiwala. Yet I suspect that despite this, readers will pick it up for entertainment.

Changoiwala has an acute eye for detail. She walks into a police station and meets a paunchy duty officer who, in mid-conversation, takes off for the loo and is astonished at the lady reporter’s perseverance in bothering to stay and wait. Then there is the description of the proceedings of a press conference and its dramatis personae, down to bulging biceps and handsome moustache as applicable, at the police headquarters.

Lokhandawala Complex, ‘the Mecca of Bollywood strugglers and the land where the casting couch finds its most unsuspecting victims’, and where at any crossroads there’s ‘bars and cafes bustling with muscular men and skimpily clad women, waiting for the famous casting director to walk in’, comes alive as Changoiwala arrives on the crime scene on an otherwise dull Sunday to follow up on a mundane press note on the Mumbai Police website.

Things heat up considerably when she, using contacts and wit, manages to trace the witness who discovered the crime as it was in progress, and breaks the exclusive story. Before alerting the police, the witness spoke briefly to the perpetrators of the macabre murder in a fancy Rs3 crore-apartment, where a wealthy 62-year-old man was being stabbed 19 times in the chest and strangulated with a computer mouse cord. The clinching detail, which ensures the murder is front-page news, is that the victim was the father of a struggling Bollywood bit actor (whose closest brush with fame apparently was as Shah Rukh Khan’s sidekick in one flick). I shan’t go further into the plot; suffice it to say that more bodies turn up around Mumbai and the killer on the loose is described as Charles Sobhraj, Ted Bundy and Jack the Ripper all rolled into one.

The genre to which The Front Page Murders belongs has intrigued me for the longest time. While I easily comprehend the allure of fictional sleuthing like Agatha Christie’s brain puzzles of yore or Dan Brown’s cryptographics of today, the tragedies of true crime are a different kettle of fish.

As a genre it is relatively new in India, perhaps because reality here can be so grim (just glance at any newspaper’s front-page) that publishers shy away from giving us full-length books. But in the English-speaking world, true crime has been at the top of the non-fiction bestseller lists for the last 50 years, or ever since Truman Capote’s 1966 landmark, In Cold Blood: A True Account of a Multiple Murder and Its Consequences, set the benchmark for all consecutive stabs at true crime writing.

Labelling it a ‘non-fiction novel’ and taking a novelistic approach rather than a strictly journalistic one, Capote created parameters for what was to come. Other true crime books by distinguished novelists include Haruki Murakami’s Underground: The Tokyo Gas Attack and the Japanese Psyche and James Ellroy’s My Dark Places about his mother’s murder. Even the genre’s reputed non-fiction writers give their books a dramatic treatment so as to boost sales—over and above whatever public interest their journalism may carry—such as Vincent Bugliosi’s Helter Skelter which is one of the most exhaustive descriptions of the Manson hippie cult murders in California, and The Life and Serious Crimes of Charles Sobhraj, by Julie Clarke and Richard Neville, about a traveller who left a trail of dead tourists in his wake in the 1970s.

One could claim that the genre eventually reached a peak when John Berendt picked the small US town Savannah as the setting for what was to become the most phenomenal non-fiction bestseller of the 1990s, Midnight in the Garden of Good and Evil. This wasn’t just the story of a crime, but a larger study of the small-town milieu peopled by a variety of oddball characters and it went on to spend 216 weeks on the New York Times bestseller list, while film rights got picked up by Clint Eastwood.

IN INDIA SOME of us have, for sure, been reading the magazine Crime & Detective ever since 1992, when it was started, attracted by headlines like ‘Tormented Teenager Nephew Slew Paternal Aunt’. In these crime reports, the dialogues are fictionalised just like in Capote’s In Cold Blood, but publisher Satish Verma assured me when I met him some years ago in his office in Delhi, that the factual stuff is “hundred- percent correct! We even give the case file numbers, if you notice, plus actual photographs of the investigating officers and the crime scene. It should read like fiction, but everything is based on real incidents.” Which is why Verma can count among his devoted buyers many top cops as well as leading gangsters.

But the genre really blossomed in the current decade. An early classic is Zero Dial: the Dangerous World of Informers by late J Dey, the Mumbai crime reporter who was himself shot dead because of his job, and which records stories of informants who risk their lives to help investigators. Death in Mumbai by Meenal Baghel, is the incredible story of an aspiring actress who went to Mumbai to seek fame, but ended up chopping up a television executive in 300 pieces. Topping bookshop bestseller racks is investigative reporter S Hussain Zaidi who churns out titles like Dongri to Dubai: Six Decades of the Mumbai Mafia and Byculla to Bangkok: Mumbai’s Maharashtrian Mobsters and other scurrilous chronicles of the lives of front-page criminals.

A notable sub-genre of India-related true crime consists of books on terrorism, which abound—perhaps the seminal title being Adrian Levy’s and Cathy Scott-Clark’s The Siege: The Attack on the Taj about the 2008 terror attacks in Mumbai. Terrorism is also a recurring theme in thriller fiction, most prominently in Mukul Deva’s bestsellers on counter-terrorism. This leads me to one of my highly unscientific pet theories, that crime books in every country mirror the collective psyche of its population. In essence, popular reading habits reflect what concerns us. We are, of course, constantly reminded of an everyday threat as we walk through metal detectors at shopping malls or face increasingly elaborate identity checks in order to acquire a SIM-card.

Reading accounts of heinous crimes and terrorism may help us deal with stress factors that lurk in the backgrounds of our lives. Changoiwala, too, as she discusses the cold-blooded murder motivated—apparently—by nothing more than the desire to take over an apartment, gives us readers a vision of what ails the city of Mumbai. Stories like these, she writes, ‘show how, despite 37,000 capable men [of the Mumbai Police] guarding us, we are still unsafe in the cocoon of our own homes.’

In India, strangely, if you step into any bookshop, true crime books have so far been stocked on the crime shelf—if there is such a shelf at all—rather than in the non-fiction section, in marked contrast to countries like, say, Australia where one will find dedicated bookstore ‘true crime’ departments. But now, with The Front Page Murders, the genre is reaching a sense of literary maturity. Even I, a novelist, have been approached by two Indian publishers in this regard and it doesn’t help when I gently point out that true crime is not my thing, as the only crimes I know well enough to write about take place in my head. But I predict that soon all Indian publishing houses will develop extensive true crime lists and shops may, in due time, give the genre its own shelf.