The Normality of Evil

Upamanyu Chatterjee’s seventh novel opens with the discovery of a dead body in a park. He speaks to Nandini Nair about creating crafty characters and the villainy principle 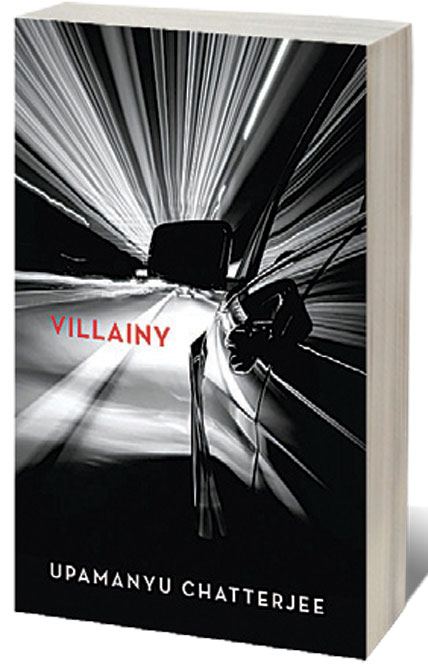 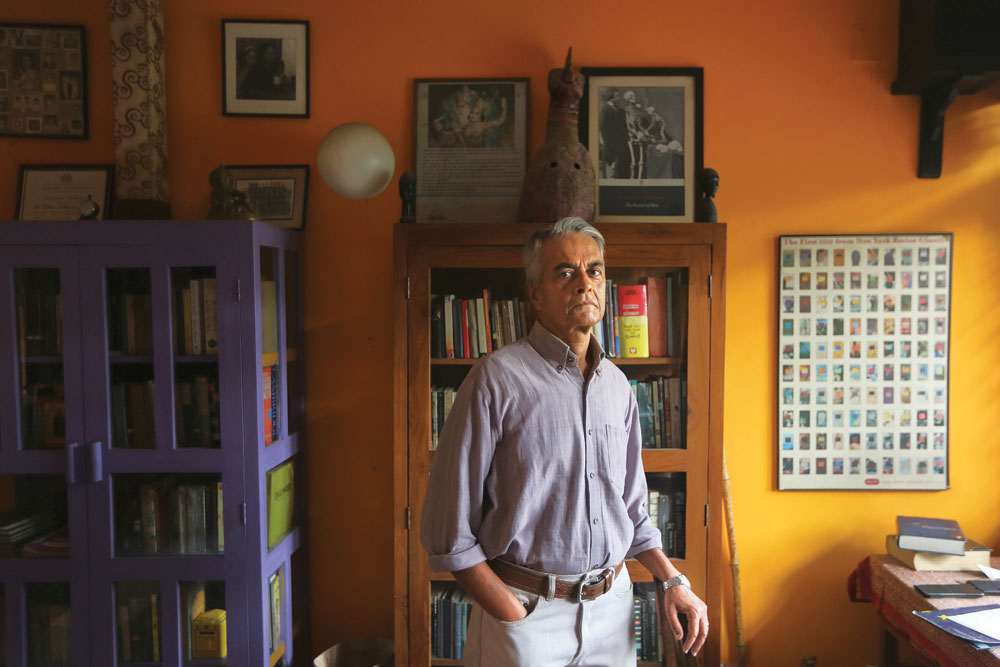 
WITH HIS SIX novels, a novella and a collection of short stories, Upamanyu Chatterjee has carved a niche for himself as the author who tends to show us that deviance is mundane rather than an aberration. His debut English, August: An Indian Story (1988) set him up as the master of ennui. His characters are not “heroes”, rather they are simpletons or schemers muddling through their day. As a civil servant, now retired, bureaucrats and babus, the doings and undoings of the government hold special interest for him. His books have a knack of saying it as is, and then throwing in a detail (or a corpse) that ignites the page.

The blurb of Chatterjee’s most recent novel Villainy (Speaking Tiger; 325 pages; ₹ 699) informs the reader that the book in their hands is a “literary thriller”. One thus assumes that this book will deviate from Chatterjee’s previous work.

However, Villainy only perpetuates the Chatterjee oeuvre, it uses a crime (the discovery of a dead body in a neighbourhood park) to speak of class divides, urban malaise, and how India’s rich treat (ill-treat) the poor. The opening ploy might be thriller-ish, but the book is no police procedural, no crime and punishment, no death and retribution. Rather it tells us how bloody deaths (even murders) are nearly accidental. Villainy is a novel without heroes, but there are decent people and then there are the delinquents. Thrillers are premised on suspense, in Villainy, anticipation and anxiety don’t compel one to turn pages. The discovery of the body provides the opening gambit, and then we move years into the past to meet Pukhraj (the spoilt, rich son of a jeweller father) and Parmatma (the son of their driver). The teenagers are the pivotal characters of the story, and the parents are the side characters who help us understand their progeny. During the 300-plus pages, five deaths will occur, and one near-fatal battery. One family will lose two sons (and a pet dog) not to carefully planned and executed murder, but rather to the cruel twists and turns of fate and because of a lonely deranged young man.

I meet Chatterjee at his home in Delhi, though he is now based much of the year in Colombo, where his wife is posted. Having just returned from the Jaipur Literature Festival, I can’t help but marvel at how different he is from his author tribe. He doesn’t shoot off one quotable quote after another. His answers instead often start with an emphatic “Ah” and “Yes” only to fade into mumbles and silences. He is unfailingly polite, but one does sense that he wishes for this entire business of meeting people and talking to people to come to the swiftest end. He wouldn’t share the posterity of Salinger, but one can easily imagine them as kindred spirits—eschewing the outside world and its demands. He doesn’t easily give into laughter, but the odd chuckle and the frequent smirk do emerge. In a milieu of pomp and performance, he appears genuinely authentic.

No city is identified by name in Villainy, but any reader will see Delhi in its pages. The big showy cars, the Diwali card parties, the teenager looking for his next Ecstasy pill and joy ride, the makings of a crime, the workings of the police and judiciary—they all speak of the capital city. Chatterjee wrote Villainy entirely during his time in Colombo. He says, “It’s been my dream to do a Calcutta book, but Calcutta is a place I only visit. So, I couldn’t risk it. Delhi somehow selected itself and at the same time I wanted to give myself some elbow room. I don’t mention Delhi even once. But it is clear that it is Delhi. So, each time you want to fool around with time and place you concoct a residential area, or police station because technically since the dates are so precise, if you mention a police station that exists, then they’ll say, ‘Oh X,Y,Z was posted there!’”

The distance from Delhi “helped enormously”. Chatterjee says, “It’s nice to be away. It’s also very nice to live in a nice place where you know nobody. It’s marvellous.” His wife’s job ensures that she meets people, but he meets no one. The one person he encounters every day is his cook. But since he speaks neither Sinhala nor Tamil, they communicate in sign language. Considering that much of their conversation is limited to the location of the fish or the haldi, this works out fine for all. Finding Colombo to be a “nice, quiet town”, he might go for a swim or a walk, but in making friends he has no interest. Tapping Villainy, which sits on the table between us, he says, “I do nothing else but this.”


It’s not a very complicated story. It is about the people you meet on your morning walk. They’re all a little crooked. Circumstances make them that way. Even the rest of it, you know, is sort of real,” says Upamanyu Chatterjee, author

The seed of the book had lingered with Chatterjee for a decade or two. It all started with coming across the factoid that the number of unidentified dead bodies in Indian cities is very high. “It’s bad enough,” he says, “living is hard enough… What happens to these dead bodies?” The novel arose from this simple question, and led him towards police stations and cops. Aware that the cops of India are terribly “overworked and underpaid,” he realised that the system to dispose of unidentified bodies is rather ad hoc. The inspector in the novel who is tasked with dealing with the unidentified dead body epitomises the travails of the cop world. Chatterjee writes, “He had quite a few things on his plate, JogiOJogi; they all had, of course, everyone at Begum Bagh Police Station was overworked. But in addition, JogiO tended to be thorough, that made him slow, slow.” The cops and detectives of Chatterjee’s world are far removed from the detectives we are used to following in literature, such as Sherlock Holmes or Hercule Poirot. These fictional detectives, as Chatterjee says, did nothing but that one case they were working on. The Indian reality, of course, ensures that for the cop, identifying a body is just one in a series of chores, which includes everything from the minister’s bandobast to demolishing a slum.

Chatterjee has a knack for showcasing these very Indian realities. Whether it is the harried cops or the petulant rich or the dawdling wheels of justice. Starting with the unidentified body, Chatterjee found that the novel’s plot and characters fell into place rather easily. He says, “The rest of it was inevitable, it had to be done. And it’s not a very complicated story. It is about the people you meet on your morning walk. They’re all a little crooked. Circumstances make them that way. Even the rest of it, you know, is sort of real.”

Like the rich of India’s cities, the affluent of Villainy treat their staff with scant regard. They make them work through Diwali nights, and have them wait upon them hand and foot till 3 am. The domestic staff live in prison-like quarters.

Chatterjee is attuned to these daily oppressions that play out in so many homes. He remembers, as a teenager, visiting a friend’s house for a cricket match or something in Delhi. In the neighbouring room he could hear his friend’s mother yelling the worst Hindi abuses at the driver. His friend seemed unfazed, as though this were a daily occurrence. Chatterjee’s discomfort with how domestic staff are treated inks much of the book. In the characters Atmaram and son Parmatma, we see good folks, who are trying to make a life and living for themselves. And who, when pushed to a corner, will fight back. Chatterjee says, “No one pays their servants anything. They get no days off. It is mind boggling, this huge divide. It’s dreadful. I’d like to think of the chauffer and his son as fundamentally very nice people. The father is a little of a simpleton. The son is very chalu (clever). The son I was apprehensive about, and finally to me it seems it works. He’s willing to play straight and knows it will be hard work. But if the circumstances are against him, then fuck it, ‘I am going my own way’.”

Villainy speaks of class divides, urban malaise, and how India’s rich ill-treat the poor. It is a novel without heroes, but there are decent people and then there are the delinquents

A convict at the jail where Parmatma and Pukhraj are incarcerated, with potency identifies how the rich treat the poor. He says to Parmatma, the driver’s son who is unwilling to share a cell with Pukhraj, “You move to his room and everyone will sneer that the beggar is again seeking the protection of the rich. They don’t protect, you know that, they suck, your blood, your semen, and then when they’ve no marrow left in your bones, they remember to shit on your face on their way out of jail.”

While being an indictment of how the rich treat the poor in India, Villainy also lays out the terrors of India’s morgues and jails. In jail too, who you are will determine how you are treated. In his acknowledgements, Chatterjee mentions the book by journalist Sunetra Choudhury, Behind Bars: Prison Tales of India’s Most Famous as being a useful resource, which helped him detail the perks that power and pelf can procure in a jail. From outside, jail might appear to be the great equaliser, but from within it is just as unequal. As Chatterjee says, “It is common knowledge, if you are rich and famous and in jail, you can spend your New Years in some hotel. But if you’re not, then you are just rotting in some hole with 40 people in a room. So, there is definitely this huge divide.”

Going through the transcript of my conversation with Chatterjee, I realise that the line he uses most often is, “The book, you know, it’s just about people.” We don’t know it, but the Mercedes driver in the lane adjacent to us could turn into a killer with a simple turn of the steering wheel. The driver himself does not know that he can kill and will kill, until he does. Pukhraj’s idea of revenge, “a head for an eye” will necessarily be disproportionate. As Chatterjee explains, “You look at Ukraine and Russia, you do something, suddenly all hell breaks loose and there’s no control. It’s like King Lear. He abdicates and then he expects things to follow certain rules. But there are no rules and there is no balance or proportion, if you let loose certain forces.” Does villainy truly run the world, I ask? “Well, it’s a pretty awful world, isn’t it?” he replies, adding, “But the villainy in the book is all under control. I was at pains to suggest that all the characters—while being small-time or big-time crooks—lead otherwise perfectly normal lives.”