The Enigma of Return

Calcutta as a place and a state of mind 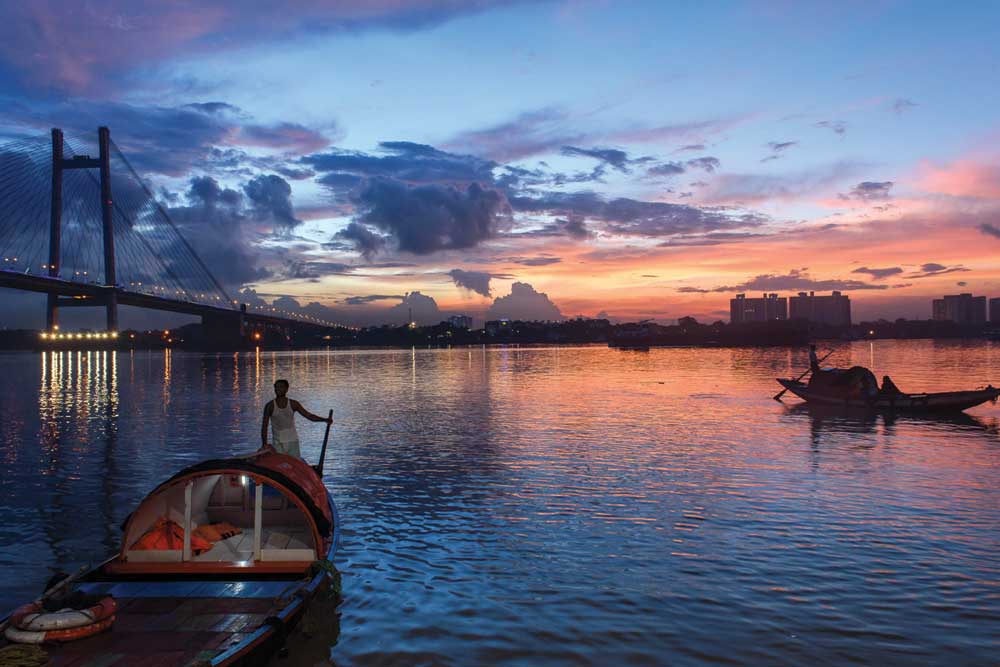 WHEN MY FRIEND’S father, a journalist of three decades, drives me around Calcutta, we visit the train crossing next to the Hoogly river, the Chinese breakfast market at dawn, the ferry to Howrah, and the idol-maker’s workshops in North Calcutta. This is the city of an old Calcutta family that has lived in the same house on Park Street for generations. The Epic City is a different version of the same reverence for a beloved, ageing place where trams still run and poets still gather to share their work in a room tucked away in a bylane. Setting aside the picturesque, Choudhury introduces us to the intriguing, baffling aspects of Calcutta. He takes us to the gradually dilapidating offices of the city’s most famous newspaper, The Statesman, where he worked as a young journalist right after he graduated from Princeton University.

As a teenager, Choudhury left Calcutta with his parents in the middle of reading Maxim Gorky’s The Mother, and finished high school in America. Though his parents continued to live there, Choudhury’s drives on the interstate highways led him to realise that he could not wait any longer to return to the only city that felt like home.

The question at the centre of this book is: why return to the third world? It is a question many of us fortunate enough to study or work abroad ask ourselves as we skip over open gutters on our commute or struggle to find a decent apartment (just like Choudhury and his wife). The immigrant story of leaving and never coming back, except to visit, has been told often. But the story of why young people are choosing to come back is less explored.

Choudhury returns temporarily to the States to pursue a PhD at Yale, where he meets Durba, his future wife. When they move back to Choudhury’s home city, Durba shrinks from Calcutta’s unfamiliar irritations. When Durba questions his devotion to the place, we identify with her.

Choudhury’s Calcutta is first steeped so deep in nostalgia, we struggle to get an intimate sense of the place. But as Choudhury’s gaze clears, so does ours. He shows us a restless place where the work day for most people wraps up early to allow for the addas, gatherings that form the real fabric of people’s lives. In a particularly touching story, he tells us of the middle-aged men he has encountered with useless, fascinating obsessions like collecting tiny Ganeshas or matchboxes.

A word repeated throughout The Epic City is ‘para’—a Bengali word that means a neighbourhood or community in a social sense rather than as an administrative or geographical division. Choudhury’s para is Maniktala, a residential area, in North Calcutta, whose greasy snack landscape we come to know well. Choudhury also shows us the other paras via the people who live there. We visit the docks that once employed 200,000 people and now employ 18,000 workers. We visit the Bijoygarh para which was once a World War II American military base in preparation for a Japanese attack that never came to be.

We visit the canal community that is thinly scattered along a long bank. Choudhury explains that had they formed one large slum, they would have constituted a voting bloc, which would have compelled local politicians to fight on their behalf. He writes their stories for The Statesman when the authorities threaten to evacuate them without compensation.

The history of diminishing jobs, the Naxalite movement, the violence of 1946, famines of 1943 come alive in the history of Choudhury’s own family, which crossed the border from East Pakistan at the time of Partition. In many ways, The Epic City is a response to seminal books on Calcutta that have neglected to tell many stories. Though Choudhary’s view of the city is undoubtedly male, with few female perspectives entering the narrative, his book deepens our understanding of contemporary Calcutta and its relationship to the past.