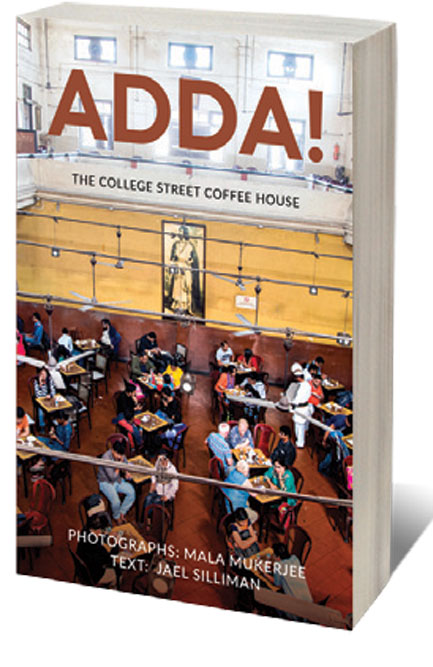 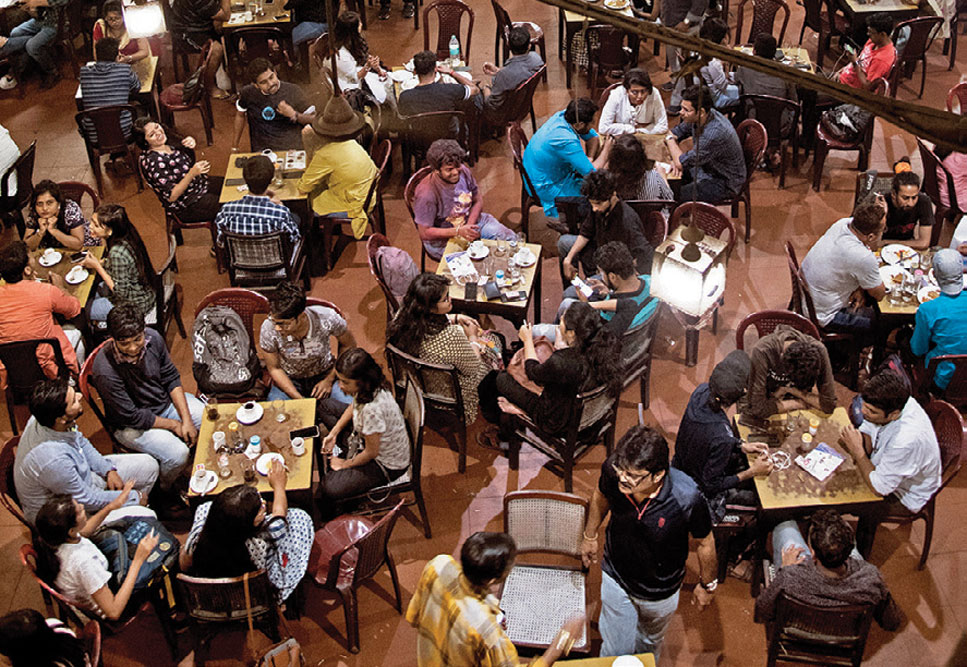 
IF THERE IS one person missing in Mala Mukerjee’s gallery of portraits that celebrates the iconic Kolkata College Street Coffee House it has to be Apu, the hero of Satyajit Ray’s eponymous trilogy. Just like the spirals of smoke that circle into the high ceiling of the Coffee House and in the distant echoes of voices evoked in the text by Jael Silliman, it’s the singular texture and tone of Ray’s world that is resurrected in this slim volume.

Let me make a confession. I am not a Bengali, nor have I ever been a habitué of the College Street Coffee House. When I did visit the place, I could only conclude that grunge and graffiti must be the ‘Lal Salaam’ of the retro-rebels.

At the same time, having been a long-term admirer of Mala Mukerjee’s work, first on the abstract seeming Jantar Mantar series that took on the patterned effect of a Riten Mazumdar textile print and then her forays into different worlds of south India and south China, I could only marvel at the restraint she has shown with her portraits in the book.

There are 26 iconic individuals from the political, cultural and professional milieu who make up the interior landscape of the Coffee House. Each one reflects a certain effortless grace that does not depend on either careful framing or lighting, let alone dramatic accessories. There is a splendid Renaissance-style portrait of Usha Ganguly, the actress who passed away recently. She is in black against black. Only her expressive face and hands are in focus, with touches of deep red and gold around her neck, with the merest flick of a curtain in one corner.

If I were to single out just one person from the picture gallery, since he has so recently been mourned, it has to be the writer and thespian Soumitra Chatterjee. Even in old age there’s the joy of knowing who he is that lingers at the corners of his smile. He has become the Maurice Chevalier of his time singing, “Thank Heavens, for all the cups of coffee I have had at the College Coffee house, without their chicken sandwiches what would some of us do!” Certainly, he was the prince who charmed at the centre of his adda while other distant galaxies circled around him.

The term ‘adda’ has entered the lexicon almost unnoticed. Was it a Bengali invention, as Nirad C Chaudhuri might exclaim? Or one invented by an upper-class Bengali dilettante who might be said to have single-handedly introduced the khadi-handloom-tribal jhola-juta-Kaliesque-forehead tikka, as a distinct uniform? They have become as emblematic as the crisp turbans and white uniforms of the earlier waiters at the Coffee House.

Why have the other famous watering holes of the intelligentsia, such as Chetana gallery and cafe at Kala Ghoda in Mumbai, not survived in the same way? Ramachandra Guha recently extolled the joys of Koshy’s Parade Cafe as being a well-known Bengaluru-style place for the chatterati, but he seemed to be the only one left—no pun intended.

The answers might lie in the superbly edited reminiscences-cum-brief biographies provided by Jael Silliman who is both a novelist and a historian. There is a narrative thread running through these stories that bring the tumultuous era of the 1960s in all its burning Kolkata intensity to the forefront. The Naxalite movement singeing the edges of the idealism of those who might have called themselves Mao-putra may have ended that particular brand of hedonism.

For the rest, it is the essence of lives deeply lived and shared that shines through the lens of Mala Mukerjee and the annals of the College Coffee House in Kolkata.