Novelist, poet and essayist, Siri Hustvedt is an intimidating figure in her books as well as in her exploration of ideas 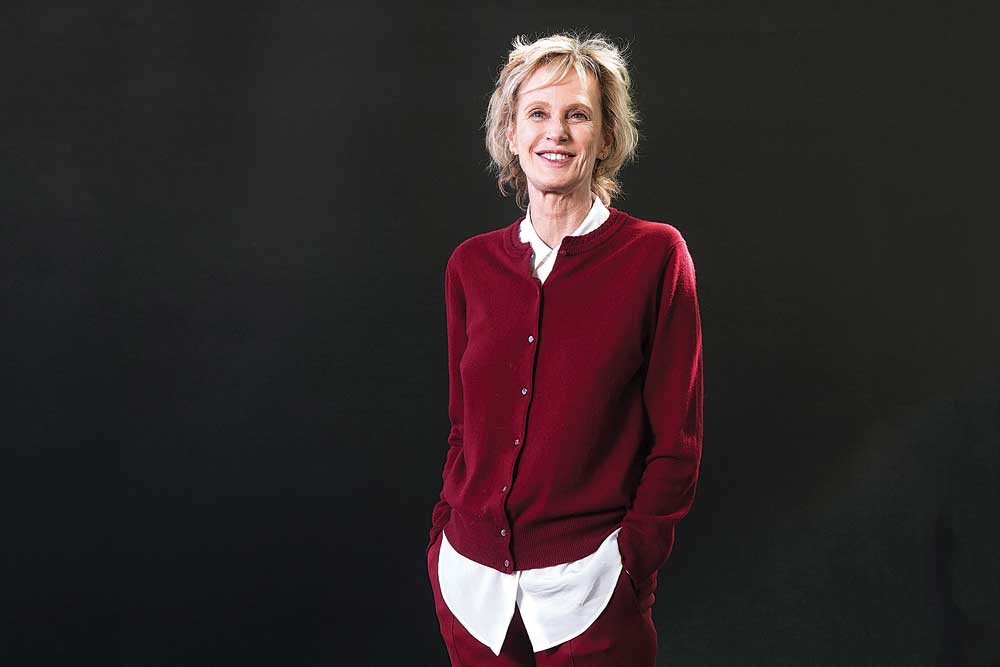 Siri Hustvedt is the author of a book of poems, three collections of essays, a book of nonfiction and six novels. She writes and lectures extensively on neuro- science, psychoanalysis and art. The Shaking Woman or A History of My Nerves (2010) is a personal investigation of the evolution of neurology and psychiatry as a patient suffering from lifelong migraines. She has delivered the annual Sigmund Freud lecture in Vienna and the keynote lecture on the work of Søren Kierkegaard for his 200th birthday. For some years Hustvedt volunteered as a writing instructor to psychiatric patients. Writing for her is a way of arriving—something happens that is difficult to quantify and understand. There’s no magic demon whispering in your ear, she says. “Writers roll their eyes when you ask ‘Where do you get your ideas?’ but actually it’s a profound question about writing. Where the hell does this stuff come from, and why does it feel so urgent?” Her doctoral thesis was on language and identity in Dickens. On Bloom’s Day 1982, she married the novelist Paul Auster.

AS AN 11-YEAR-OLD growing up in Northfield, Minnesota, Hustvedt began to read Emily Dickinson. She did not understand the poems, but there was an emotional spark that made her wide-eyed with pleasure, and that pleasure has never left her. The oldest of three girls, she frequently felt the need to be alone. “I was the only kid with sardine and cucumber sandwiches in school. That marked you as someone who was on the outside,” she says, laughing. Hustvedt’s mother is Norwegian, and Norway has always been “the other place”—an alternative way of looking. So much so that a young Siri asked: “Mama, why is everything so much better in Norway?” In Minnesota, the family lived near a creek in the countryside, and even though Hustvedt has been a native of New York for over 40 years, she still accommodates memories of that childhood landscape inside her—the flat prairie lands, barbed wire fences, cut grass and manure.

We are in the lobby of the Marriott Hotel in Providence, Rhode Island. Take my Breath Away from Top Gun is playing in the background. It seems apt to speak of the systems of memory here, because hotel lobbies, like airports, are such anywhere-everywhere places. “Long before I knew anything about neuroscience,” Hustvedt says, “I wrote that sentence, ‘Writing fiction is like remembering what never happened.’” The link between memory and the imagination is something Hustvedt explores in her latest book, A Woman Looking at Men Looking at Women: Essays on Art, Sex and the Mind (Sceptre; 576 pages; Rs 1,400) . And while most fiction writers can hold forth on the joy of manipulating memories or the supremacy of emotional truth versus True truth, not many could present a paper to a conference of neuroscientists on the subject. In this, Hustvedt is intimidating.

Physically as well, she’s intimidating. She is tall, distractingly so, and blonde. She favours shirts buttoned up to the neck and laughs frequently—expansive, throaty laughter that sometimes denigrates into chuckling, but never giggling. Five minutes into the conversation, she slaps an age on herself—63—because you sense she wants to be the kind of woman who really holds it. And she does.

It’s not just the removal of erotic desire, Hustvedt insists. “I can speak honestly now, as an old woman. It’s cheaper. It simply allows you to inhabit a more masculine position because it’s no longer this fertility sexualised thing endlessly propagated with young women.” The marginality of women in science and art is a central concern. As is the never-ending kowtowing to “the great man”. She has much disdain for the apparatus of greatness. “The idea that art is some rarefied intellectual masculine activity, that old ‘male genius’ thing, is just nonsense…. I decided at some point I’m not thanking everybody for everything because it’s not totally sincere. And I’m not apologising for myself before I give a talk. That’s over.”

AND HOW HAS it been, being married to ‘a great man’? I ask. Hustvedt laughs. Journalists have long been telling her that Paul Auster must have taught her everything she knows about neuroscience and psychiatry. Never mind that she has a PhD and publishes in science journals. “I’ve understood my marriage functions in two ways. One is that it’s very uncomfortable for people to look at a marriage and understand that the woman is in certain respects more erudite than the man. This is somehow an insult to them. And it’s nothing to do with how I live inside my marriage and the admiration I have for this man who I happen to have been married to for 37 years, and who has been part of my development as a human being. You know, he talks about me all the time, but when the article comes out, I’m gone. I mention him, and he’s usually the headline.”

“The idea that art is some rarefied intellectual masculine activity, that old ‘male genius’ thing, is just nonsense”

Auster has said about Hustvedt that he’s never seen anyone stand in front of a painting as long as she does. One of the abiding themes of A Woman Looking at Men… is the question of artistic transference. ‘Artists are cannibals. We consume other artists, and they become a part of us—flesh and bone—only to be spewed out again in our own works,’ she writes. Hustvedt’s modus operandi when she goes into a museum is to understand the implicit hierarchies present when you walk through the door. “You’re confronting works already consecrated by the museum, by the whole establishment, so the one way to try to work through those biases is to spend a really long time in front of a work of art that you’ve chosen to think about, something that’s seduced you in one way or another.”

Part of Hustvedt’s interest in writing about art is figuring out why some people have to do it, why they don’t get over this impulse. She tells me about an archaeological museum in Tubingen, Germany, where she fell in love with a 40,000-year- old hedgehog carved out of ivory that could sit in the palm of your hand. “They have a beautiful room with lit cases, and there are these little animals—bison and bears. We don’t know what they were for, we don’t know who these artists were, if you want to call them artists. And if you think about the fact that written language is only 5,500 years old and there we have these 40,000-year-old animals that you recognise right away as a 21st- century person, there is a will to representation in the species that lies at the heart of what we call art.”

Another question about representation that she’s been obsessing over is: Where are the birth paintings? For Hustvedt, the fact that there isn’t a single painting of the beginning of human life in the Western tradition until the feminist movement of the 1970s is shocking. “There are two Etruscan shards, and in the Hindu tradition and in tribal art there are birth images—literal heads coming out between a woman’s legs. This is the beginning of life. Now why is it that in the Western tradition this is totally suppressed? You don’t find it in early photography either. There might be some clandestine images, but you know, there are lots and lots of clandestine images of people fucking. That goes all the way through. Somehow, birth is suppressed.”

Later that evening, I hear Hustvedt give an electrifying reading from a forthcoming novel, which features Baroness Elsa von Freytag—a flamboyant Dadaist poet and performance artist who tore up Greenwich Village in the early 1900s (now quite forgotten). There is strong evidence to suggest that the 20th century’s most significant piece of art, Marcel Duchamp’s Fountain was actually Baroness Elsa’s idea. While we talk, Hustvedt brings up the German mathematician Emmy Noether. “Einstein declared her one of the greatest mathematicians of all time. There’s a Noether theory about symmetries, but does anyone in the wider public know who she is?” Hustvedt believes women of genius are stifled and erased in history because they are alarming figures—insurrectionists.

She believes the only way to combat this erasure is by consciousness-raising and feminist scholarship. So, while she has gone back and forth about whether women should show their work collectively and publish in women’s anthologies, or whether this leads to ghettoisation, she believes that the conscious gathering of women have unearthed brilliant women who were wiped out by explicit and implicit forces. “Women placate everyone before they even start. They want to undermine the threat they’re worried of being punished for. If you look up at the great man with a shining face, then he is put at ease. He is made to feel that you’re not going to bring him down. I want to live in a world of some form of genuine equality where I am taken on as an equal because I deserve it from the get go.”

Part of the joy of reading Hustvedt is to encounter a mind that is curious and intellectually robust. She is not looking at the great man with a shiny face. She is not worried about mentioning Hegel. Popularity is not the gauge she’s interested in. She tells me how she once tried to read a romance novel because she thought she needed to figure out what it was all about, and maybe it would be fun, but she couldn’t get past the writing. “One of the pleasures of becoming an intellectual is that your pleasures do get more complicated. We all like to be aroused in sexual ways, in intellectual ways. For me, the good work of art is a work of art that allows you to recognise something that you wouldn’t have been able to recognise without the work of art. Something true to you, like Emily Dickinson. When I started reading her, did I understand? Could I say, ‘This is what she’s trying to say’? No. I look at her every week to remind me what English can be, that this is something that can be done with the language that nobody did, the kind of stubborn world of those texts.”

‘THE WORK OF THE HUMAN imagination, it seems to me, is about becoming another, looking at the world from another perspective, even if, as in Proust, the writer becomes another Marcel, a kind of second literary self who narrates the story. But, for many of us, it means traveling farther, becoming a person of another sex or class or background or just someone funnier, tougher, and stranger than we are. I have argued that the multiple selves of an author’s inner geography are created at the deep levels of her being, which includes the bodily music of her earliest forgotten interactions, as well as all the books she’s read, the people she’s loved and hated, and her memories, fantasies, hopes and fears. Can we say then that the process of writing is fundamentally different for a woman than for a man? Is the question ‘Why one story and not another?’ bound to one’s gender?’