Queen of the World

The female power of the Mughal Empire 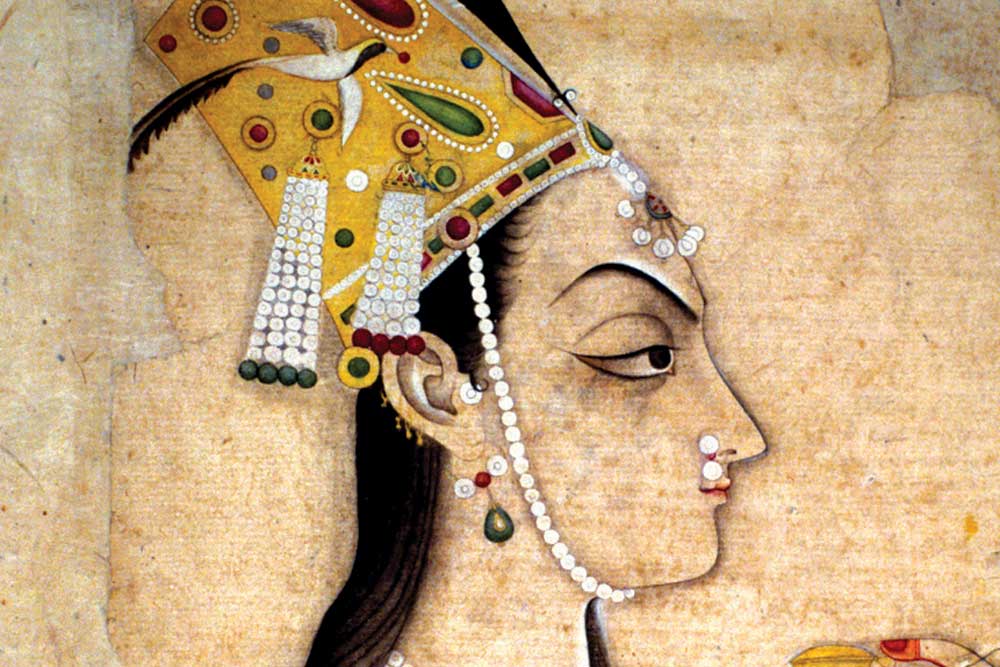 WRITING THE BIOGRAPHY of a historical figure separated by over four centuries is a challenge. It is even more difficult when the subject is Nur Jahan, the powerful wife of Mughal Emperor Jahangir, whom she married when she was 31, and a widow. The fact that she proceeded to act as a ‘co- sovereign’ for a number of years during Jahangir’s reign is widely acknowledged. There is also no doubt about her personal accomplishments, including her skill at shooting with a firearm—an unusual talent for a woman in that age. Her life lends itself to a detailed biography.

Yet, it is not surprising that historians have, in the words of RubyLal, ‘offered only bullet-point synopses of Nur’s life: she issued orders, coins were struck in her name, she designed clothes and gardens.’ After all, she herself left no writings behind apart from a few extant formal written orders and occasional poetry. Some details about her and her family come through in the writings of her contemporaries, notably in the diary of Jahangir himself, but certainly not enough to flesh out the woman, her personality, and her life.

Lal overcomes these challenges innovatively. For one, she uses the biography as an opportunity to discuss aspects of the wider world in which Nur Jahan lived. Thus, she describes the political background of Safavid Iran (the homeland of Nur Jahan’s family) and Mughal India, the latter in particular detail for obvious reasons. A general reader may not be able to make sense of many of the developments in Nur Jahan’s life without grasping the fundamentals of Mughal kingship, the imperial bureaucracy (the mansabdari system), and important policies such as Akbar’s sulh-i- kul. Details of the family and its structure are equally important—traditions of succession to the throne, for example, and the harem and its hierarchy and politics. These descriptions help make this biography a window to Mughal history at large.

In trying to reconstruct something of the life Nur Jahan might have led, especially in the period before she entered Jahangir’s zenana, the biographer faces great difficulties on account of the paucity of direct information. To fill these gaps, Lal uses texts that tell us about the social background of Nur Jahan’s family, offering us some idea of the kind of upbringing a young daughter of Iranian emigrés in India might have had. The stories she was told as a child, her education, and the code of conduct that would have been expected of her as a girl are all extrapolated from historical studies of literary material and prevalent social norms.

This is a technique that undoubtedly does much to ‘bring history alive’ for a general readership, as we get insights into the Mughal-era way of life, language, food, social and religious customs. It does nevertheless have its limitations. Nur Jahan spent the years after her first marriage in Bengal. The birth of her daughter during that sojourn is described thus: ‘[N]ew traditions from Bengal would accompany Ladli’s birth. Women in the mansion and from the neighbourhood would light a fire with straws taken from thatching and make an offering to Shashthi, the goddess of children….’ And of Ladli’s childhood, it is said, she would listen to ‘songs in Bengali, her twin first language along with Persian-Hindavi. Her parents would teach her to speak in both tongues with gentility and restraint.’ One wonders at the validity of such extrapolations and whether at this point the book might be moving from history to a more creative genre.

The details of the latter part of Nur Jahan’s life are less problematic. What the author effectively does is to analyse the events of Nur Jahan’s life: the death of her first husband, her marriage to Jahangir, her rapid rise to a de facto joint ruler, her astute political manouevres to sustain her own power and of those close to her, and ultimately her inability to hold on to authority without a male sovereign through whom she could act.

Empress is the story of the life of a remarkable woman and her times, put across in a narrative that is sympathetic without being sentimental. It is an example of the closest we can probably get to recreating the lives of elusive female figures in our history.