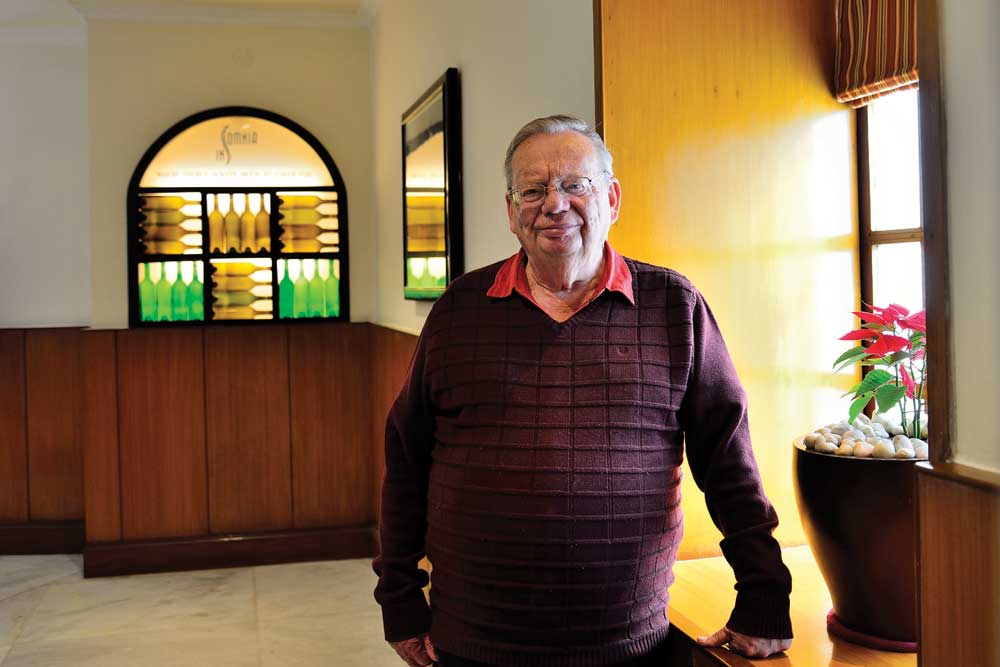 THE VERDANT HILLS which fuel most of Ruskin Bond’s works are malleable enough to double up as foreboding landscapes for his chilly ghost tales and paragons of a boyhood paradise. In Bond’s latest collection of poetry I Was the Wind Last Night, he opts for the latter. Featuring an array of poems, some that were written 50 years ago, this is a collection that’s bursting with a childlike wonder for nature, childhood, and reminiscences of the past.

There’s a calming effect to the poems, like being whisked away to the uncomplicated dreams and desires of childhood, or Enid Blyton’s world. You break into a smile when a six-foot cherry tree sprouts despites the odds stacked against it. Nature is a constant, even dreams are filled with them. Love poems are penned for the Commelina flower. The poems are refined versions of the kind a dreamy child might have written in a school notebook. That’s not to say these are jejune. In fact, Bond’s awe of the majestic landscape and the simple communities living there almost gives the collection an anthropological bent. In The Trees, he says ‘I listen to their whispering, / Their own mysterious diction; / And bow my head before their arms / And ask for benediction.’ Bond also rues changing landscapes and the simple pasts. He wonders where the pool on the hill has disappeared. In Parts of Old Dehra, he laments a garden town’s evolution into an impersonal city.

Bond’s trademark wit does feature, sometimes directed at the nature of Englishmen to meddle. In A Frog Screams, after he prevents a snake from swallowing a frog, he’s pleased with himself. ‘‘Is this what it feels like to be God?’/ ‘Only what it feels like to be English,’/Said God (speaking for a change in French); /‘I would have let the snake finish his lunch’’. Bond also draws from his love for ghost fiction to write comic supernatural poetry. One of them, A Nightmare has welcome shades of Neil Gaiman’s Coraline.

Some poems also deal with more painful familial memories. Bond’s distant relationship with his mother and stepfather adds gravity to this work. After he is ‘dispatched’ to them following his father’s death, he talks about meeting them at the station. ‘‘We thought the train would be late as usual.’ / It had arrived on time, upsetting everyone’s schedule.’ Bond’s abandonment is invoked in at times painful detail. As a child he is left alone with the servants, while his parents are away at high society shindigs. When Bond discusses parting ways with his friend in the evening, the words cut. ‘Late evening, past cowdust time, we trudged home: / He to his mother, I to my dinner.’

Occasionally, the oriental third world romanticisation chafes. In Lost, while on a ship bound for London, he longs for the village he left behind in India including ‘the soft, shoeless tread of a village boy’. Slum Children at Play is even more egregious. ‘Imps of Mischief / Barefoot In the dust / Grinning, mocking, even as / They beg you for a crust / No angels these / Just hungry eyes / And eager hands/ To help you sympathize…’

It’s fitting that the collection ends with mediations on death. In the poem At the Grave of John Mildenhall in Agra, the late English explorer who became part of Akbar’s court, settled in India and later died there seems like a spiritual forebear to Bond. In Last Words, the Buddha asks his disciples, ‘‘Is there anything put together that shall not dissolve?’’ The answer might be Bond’s words.

If Bond’s poems thrive on their simple, childlike pleasures, then Sharanya Manivannan’s poems are resplendent, locking you up in hallucinatory visions

If Ruskin Bond’s poems thrive on their childlike pleasures, then Sharanya Manivannan’s poems in The Altar of the Only World are resplendent, locking you up in their hallucinatory visions. Written over nine years, the book has a lot to unpack with themes of exile, longing, love lost and Manichean journeys of the self. It’s the myths that bestow these motifs their colossal canvas spanning the heavens, earth and the underworld.

The most familiar figure for Indian readers is Sita, grappling with divine and patriarchal forces after her exile into the forest. Also in exile, from heaven due to his fall from grace, is Lucifer, rendered like the tragic Hellenic figure from Paradise Lost rather than the biblical reprobate. Rounding off the trifecta is Inanna, the Sumerian god of love, fertility and war who journeys to the underworld to confront her sister (and shadow self) Ereshkigal. Both Lucifer and Inanna were also names for Venus, making this a grand cosmic tapestry across time and cultures.

If one is initially worried about the choice of Sita as one of the pivots, endlessly remixed as she is in our cultural imagination, our fears are quickly allayed. Sita isn’t the woebegone passive figure from our myths. Nor has Manivannan anachronistically fashioned her as a feisty heroine. Her paeans are to love, not heavenly lords, and longing for wholeness in herself and her surroundings. Her resilience is tested, but she refuses to submit. Her ability to endure is seen as strength, not a virtue. Sample these lines in Fireproof. ‘I will be buried, / not burnt, / amidst abrogations of smoke.’

Lucifer also grieves his exile. ‘If there is a way back into / that country, I will receive that road / wherever it deigns to meet me,’ he says in Carceral. And yet, he also understands that this pain is responsible for beauty in some ways. In Venus of the Diaspora, he notes, ‘It’s the dark that cradles the stars apart / It’s great loss that serves as beauty’s spindle.’

Inanna’s confrontation with the underworld tests her nature. The Ascent reverses the narrative in The Descent of Inanna. Inanna leaves the underworld, going gate by gate and collecting all the things she was asked to submit because they are rightfully hers; ‘ask for everything / it was yours to begin with / but there was just no other way.’

Sometimes these characters occupy the same universes. Sita watches Lucifer plunge from the sky into the forest during her exile in Flight. She speaks to Draupadi in Fire-forged, Blood-born, relaying that ‘At the core of every blood epic / is a woman / born of battle-lust.’ She also cautions Shurpanakha, ‘To love is to lose, to learn the art / of afterlife.’ Even Inanna deals with the multi-faceted nature of her relationship with her sister who taught her to fight and honour herself. This expression of sisterhood occasionally reminded me of Volga’s The Liberation of Sita.

The book frequently harkens back to grandiloquent myths, yet it’s clear that Manivannan has a personal connection with characters in exile. She was forced to leave Malaysia (where she grew up) due to political and personal reasons. Her Sri Lankan born Tamil mother has spent most of her life outside her homeland too. Unsurprisingly, the Tamil pogrom is alluded to in the book. Self-portrait as the Island on Fire conjures up horrific images of a burning Sri Lanka in the wake of the 2009 military offensive.

What can occasionally make The Altar of the Only World frustrating for casual poetry readers is that it is designed for pontification rather than immediate recognition. The melding of these diverse mythic imageries is dazzling but also leaves you with the work of applying your knowledge to work out whose narratives you’re reading.

Those are minor quibbles, however, with a work whose imaginative verses singe and crackle in your mind for days.