A country house murder, the dreaded secret service in East Berlin, and a policeman in future Italy—mysteries stretch boundaries 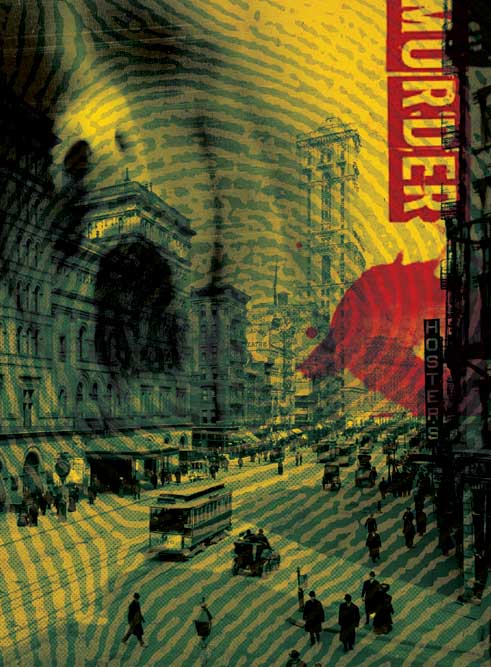 THOMAS MOGFORD IS back with a new Spike Sanguinetti mystery. Spike who, you might enquire. He is a Gibraltarian lawyer (yes, people do seem to live on the Hyde Park-sized rock) who, having battled villains in the previous three mysteries and lost the woman he loved, takes a holiday in the north east coast of Corfu where his business partner, Peter, has a house overlooking the azure blue sea. His father, Rufus, accompanies him. They are received at the ferry station by the housekeeper’s older son, Lakis. The two old men (Peter and Rufus) play cupid and invite Spike’s former girlfriend, a Gibraltarian police detective to join the menagerie. Peter takes them to a party at his wealthy neighbour’s mansion. All the set pieces for a country house murder are in place—the Hoffman patriarch, his abrasive son, the effete grandson and the wild and beautiful twin sister whose name is India. Not forgetting a Sri Lankan commando, Rajesh, the Hoffman family’s head of security.

While the patriarch is showing off an excavated site of King Alcinous’s palace from Homer’s Odyssey, they stumble upon a body. That of Lakis’ best friend, Arben. Lakis is arrested and incriminating evidence found in Lakis’ room seals his fate despite his protest that he is innocent and that a young Albanian woman whom he had given a lift from the Hoffman residence to downtown Corfu can vouch for him. But she has disappeared, and there are signs of a bloody fight in her apartment above a sports bar.

Arben too is an Albanian. Can a blood feud be far behind? Of course not. Kanun, the law that regulates djakmarrdja , vendetta—when a family takes blood for vengeance—weaves through the plot. Enter Arben’s family, which is a major player in the drug trade just two miles across the sea from Corfu in Albania. Spike has to defend Lakis, and later protect the younger brother from paying the price in blood.

Mogford does a very good job of marrying the mystery, the menace and the suspense to an utterly gorgeous setting. What’s more, Mogford pays tribute to Gerald Durrell (some of the Hoffmans are watching My Family and Other Animals at the time of the murder); the Durrells lived in Corfu in the inter-war period.

Most authors struggle with bringing all the strands of a story together. Here we have Albanian drug dealers, a very wealthy English family, and a young Albanian woman who has disappeared and is being chased by a murderer, and somehow Mogford constructs a very believable and charmingly told suspense mystery out of it. The plot doesn’t feel forced at all. One gets a feel of the seedy side of Corfu—the clubs and the drunken tourists—and also of the cocooned lifestyle of wealthy English families with their fleet of teak sundowners, monogrammed beach towels, and mansions where ‘running alongside the pool, a channel of water sliced into the flagstones in which a selection of Mediterranean fish are swimming, each looking slightly puzzled by its incarceration.’ We visualise the rich cinnamon spiced moussaka, tanned faces glowing from the sun, powerful pine-resin wine, the olive trees and the shimmering azure sea—all the things that make up Corfu. A great vacation read.

LET ME BEGIN with the things I liked in Stasi Child by David Young. The setting is spot on. What’s not to like about East Germany in 1974, an icy East Berlin, and the lurking presence of the dreaded secret service, the Stasi? A girl is found by the wall. The senior Stasi officer (Lieutenant Colonel Jager) says she was escaping to the East. From the West. Enter Oberleutnant Karin Muller, the only female head of a murder squad in the whole Republic, and not yet in her 30th year. Karin points out that the girl’s shoe prints don’t tell the story of fleeing from the West. She is told that she should only report to Jager, and only focus on identifying the girl whose face has been burnt by acid post-mortem. A more Machiavellian game is afoot within the Stasi.

God’s dogs begins with a very interesting ‘What if’ situation. What if Italy is ruled by the Vatican and is a theocratic state?

I also liked the way the author shifts to the viewpoint of an anonymous girl in a reform school in 1974. It is deftly rendered and is a clever ploy by the author to make the reader care about the girl’s fate, and wonder if it links to the dead girl.

A third strand pertains to Karin’s personal life. Her husband is a math teacher who used to be fun until he was sent off to teach at a reform school for not giving sufficient weight to political teachings. The husband is obsessed with Karin’s affair with her deputy.

Alright, the set pieces are in place, thinks the reader. This is where the author’s ease with the era and the story begin to waver. One experiences a strange disconnect with the era; the characters sound more like 21st century observers commenting on East Germany of the 1970s. For instance, Karin, while speaking to Jager, looks at the TV tower of Alexanderplatz and thinks: ‘Yes, it was a small country, making its mark… not reliant on manufacturing cuckoo clocks for tourists like some western states.’ There are several such instances where the characters spout the party line in a perfectly sincere manner. Subsequently, these same characters seem to adopt a more cynical view of life under communism; for instance, Karin and her team are not surprised that people try to flee to the West. This disconnect is most visible in Karin, and makes her emotions and reactions far too erratic for the reader to get a sense of bearing and to identify with her. In the messy domestic tangle too, one is left adrift.

It doesn’t help that the different strands of the story are brought together in a convoluted fashion. Yes, the Stasi did awful things, broke up families and tortured many people, but these tales in the book are too distant and detached for the reader. In the acknowledgments section, the author reveals that it is a debut novel, and the much workshopped nature of the novel explains this disconnect. Young is on the right track but his main character needs to be handled with a surer and steadier hand.

STEADY, SURE AND deft are the adjectives that come to mind when one reads God’s Dogs. At first, Diego Marani’s book reads very strangely. Not like a typical mystery where there is a set-up, and you get a glimpse of the lead character’s character that makes you interested in following the tale. I looked up Marani’s profile. Turns out his previous books were New Finnish Grammar and The Last of the Vostyachs, and both seemed to have done well in the prizes circuit. God’s Dogs is like eavesdropping on a conversation going on inside the writer’s mind. More specifically, an argument about the role of the state in mediating the tension between the dictates of belief and the demands of free choice. But God’s Dogs is not a pedantic book.

Marani begins with a very interesting ‘what if’ situation. What if Italy is ruled by the Vatican and is a theocratic state? What if the state’s secret service hunts down those who transgress the religious laws?

The main character, Domingo Salazar, is a policeman in an Italy 20 or 30 years in the future. ‘I see to it that the laws of our Holy Mother Church are respected…I never knew my parents, but from the colour of my skin I think they must have been Caribbean….I studied at the patriarchal monastery in Bologna and then at the Papal Police Academy in Rome, which I left with the rank of inspector in the fifth year of the reign of Pope Benedict XVIII.’ Policemen in this Italy are given to quoting the catechisms of Joseph Ratzinger such as: ‘Angels are individual beings endowed with intelligence and will’.

Salazar enters the church and kneels in the confessional and awaits instructions about his next mission (a delicious irony). His superior, the vicar whispers through the grill about the urgency of the assignment. “Euthanasia, as miscreants and scientists refer to it, destroys what God holds dearest, namely, the life He has given us.” If men cease to fear death, the church’s hold on people’s consciences is also threatened. The Catholic state suspects that these terminally ill patients may be helped along to their deaths by an underground group, the Free Death Brigade. Salazar’s mission is to track down Ivan Zago, an abortionist doctor, whose father is in the Hospital of San Filippo Neri under a false name. ‘The bait of the father will lead us to the son.’ Of course, the reader is hooked.

Salazar is a complicated and morally ambivalent character—a homosexual (in a world where homosexuality is a crime), who smokes hashish and likes ‘destroying things’. But at the same time, at the beginning of the book, he is committed to the Papal project of the Counter- Reformation. A compelling character in what is bound to be a gripping series. Can’t wait for the second book.