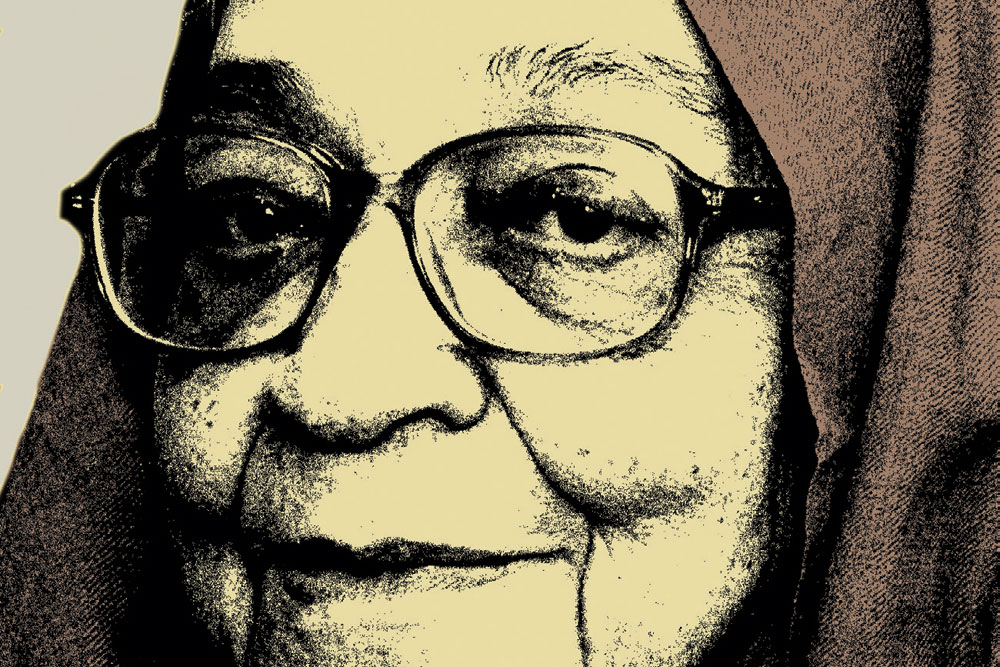 AROUND 80 PAGES into A Gujarat Here, A Gujarat There—the English translation of Krishna Sobti’s novelised memoir about a young woman seeking a preschool job in the princely state Sirohi shortly after Partition—comes a chapter that marks a shift from the narrative we have so far experienced. Up to this point, the book is in a third-person voice, albeit a subjective or limited one that keeps us tied to Sobti’s actions and thoughts. Now this chapter, printed in another font—more cursive and childlike—has Krishna writing in the first person, recalling a birthday picnic she had successfully organised for her friends during her college days in Lahore.

Food and tea were ordered—from a restaurant that had its own van which could deliver anywhere in the city—and the Principal Sahiba was persuaded to allow a riverside party. A minor boat accident during the picnic led to two boys joining the group. Folk songs, ghazals and poems were recited, everyone had a good time. But in Krishna’s telling, the party also lost some of its sheen because it grew dark suddenly— and because she didn’t know if she and her friends would ever return to that idyllic spot for another such celebration.

Is this a premonition of partings to come, one wonders, or is she writing with the benefit of hindsight, adding a dab of melancholia to an episode that was unrestrictedly happy when it took place?

The sense of a childhood lost—or ending before one realises it, in the storm of Partition—is vivid, but equally notable is how it sneaks up on us. The change in font and perspective has prepared us for something different, but as the memory-dream unfolds we yield to its languid flow. And then, in the last lines, without anything overtly dramatic taking place, the chattering of young people gives way to an ominous stillness. There is something cinematic about the episode, and haunting in the way it disrupts the main story.

That story is a seemingly straightforward one. A refugee from Delhi, young Krishna— headstrong and wavering in turn—arrives in Sirohi where she must deal with self-doubts as well as some resistance from the educational director, Zutshi Sahib, who would have preferred another candidate for the job. She meets the more welcoming Divan Sahib, as well as members of the royal family; she travels on work to Ahmadabad and Bombay, in the process also spending time with some of her relatives and slipping into other distant memories; on returning to Sirohi, since the preschool has not yet opened, she is employed as governess to the four-year-old Maharajah Tej Singh, and witnesses the political intrigues and inter-clan rivalries bearing down on a way of life that is about to fade.

Reading this memoir, with limited knowledge of Sobti’s earlier work, two things leapt out at me. First, the celebrated author—who passed away this year, aged 91—was well into her eighties when she wrote this book (the original was published in 2016). Second, the playful experimentalism of the writing. Though I was personally very taken by the picnic interlude mentioned above, that isn’t the first instance of the book deviating from linear storytelling —there are other asides and disruptions. Early on, for instance, there is a long stream-of-consciousness passage, made up of disjointed thoughts about the 1947 massacres: about the many Abduls and Rams who turned on each other; how the gulistan ki bulbulein (the rose garden’s nightingales, a reference to a line from the Indian national anthem) stopped making sweet music in unison and took up knives and cleavers instead.

The sense of childhood lost—or ending before one realises it, in the storm of partition—is vivid, but equally notable is how it sneaks up on us

Much later, even as the third-person narrative continues, a delicate shift occurs: where Krishna was earlier referred to only as ‘she’ or ‘her’, she is now variously called ‘Bai’ or ‘the Governess’ or ‘Ma’am’, with the reference sometimes changing from one paragraph to another depending on context and terms of engagement. It is as if the book’s canvas is expanding to accommodate the perspectives of other people—the maids appointed to serve her, the child maharajah, the other royals—and her identity is being broadened from being just ‘that refugee girl’ to something fuller, something that commands respect. Or perhaps this is only happening in her own mind?

Then there are the many short, staccato sentences—in that picnic account, for example; ‘Colourful dupattas and fresh river breezes. … The imposing height of the principal sahiba. A unique glow to her face. Her hair pulled back in a small bun. A white sari with a white border. Kanchan Lata Sabarwal. A unique personality. … The banks of the Ravi. Boating. Girls splashing into water, then a rescue. Tea from the Standard.’

It’s possible to wonder if some of these characteristics of Sobti’s prose might have a practical source: an ageing writer putting things down as quickly as possible, perhaps even conserving energy by not writing full sentences. As translator Daisy Rockwell suggests in her ‘Introduction’, this book has the feel of an old person drawing on ancient memories, including seemingly trivial ones, and setting them down simply because she remembered them and wanted to preserve them. However, Rockwell also points to the more general difficulty of translating Sobti, who doesn’t set out to make things easy for a reader by describing things at length, but often uses language in a condensed, fragmentary way to convey impressions.

These formal qualities—the restlessness, the memories bleeding into each other, the shifting of viewpoints even within a broadly standardised narrative voice, the hint of fractured personalities —are well suited to a book with the shadow of Partition over it. The title refers to two Gujarats—the Indian state that Sirohi is on the verge of being assimilated into, and the district that is now in Pakistan (usually spelt ‘Gujrat’ in English, but spelt the same way as the Indian Gujarat for the purposes of this book). But there are other partitions here, as there are elsewhere in Sobti’s writings. Having used the male pseudonym Hashmat for some of her work (as Rockwell points out, she even took a little dig at ‘Krishna Sobti’ while writing in this voice!), she certainly knew about the many dualities present in people. The Krishna of this story is internally divided herself, vacillating in her early days in Sirohi (she contemplates going back to the station a few minutes after arriving)—and interestingly, when she does make up her mind, it comes from defiance, after she learns that Zutshi Sahib doesn’t want her in the position.

Other divides in this book include between past and present (or looking back and forward), between childhood innocence and adult pragmatism, between Rajputs, the merchant class and Brahmins, between the types of clothes people wear in various states and kingdoms, between the old world where a little child may be taught how to comport himself as a ruler and the rapidly arriving new one where there is only a proud young democracy with no time for the fancies and protocols of kings (at least not of the old variety).

And there are the partitions that separate ghosts from the living, as Krishna discovers when she is haunted by spirits of friends and acquaintances murdered during the riots. ‘Krishna Krishna,’ one of them teased her when they were children, ‘As thirsty as a well/How much water will you pull/How much thirst will you quench/As much nectar as you drink/That’s how long you’ll live.’ It’s a reminder of the pressures the octogenarian Sobti must have carried as a living well of memories, writing furiously, using mind and pen to give voice to those she had survived by so many decades.