The Delhi-born, US-based writer's new novel captures the terror and tragedy of our time 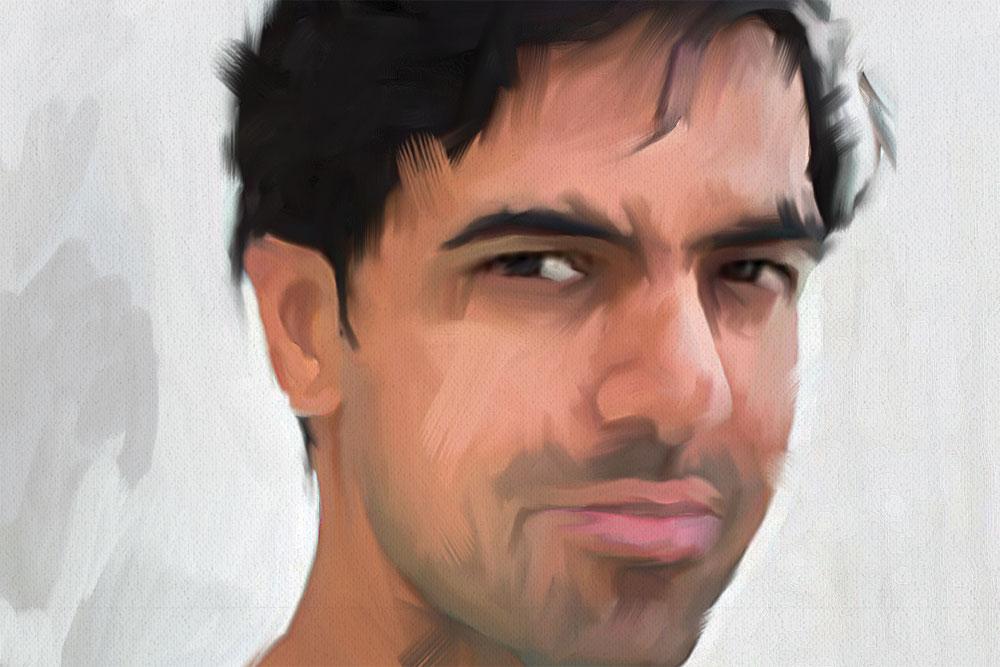 KARAN MAHAJAN AND his characters hail from Delhi. But while their origins might be in the Capital, they share a similar sense of un-belonging and being ‘at the mercy of forces greater than themselves’. Mahajan’s recent book The Association of Small Bombs (Fourth Estate, 276 pages, Rs 499) is a Delhi novel, the action is set here. But it is also a Delhi novel wherein the mental makeup of the characters swathes the city in Stygian hues of despair and grief. The surfaces of the city refract the emotions of the characters, making for a bleak, bleak picture.

The Association of Small Bombs is 32-year-old Mahajan’s second novel. His first, Family Planning (2008), won the Joseph Henry Jackson Award and was a finalist for the International Dylan Thomas Prize. While he grew up in Delhi, this Stanford University graduate has worked as an editor in San Francisco, as a consultant on economic and urban planning issues in New York for the local government and as a researcher in Bengaluru. His second novel, which released early March in the US, has received accolades. The New York Times called it ‘smart, devastating, unpredictable and enviably adept in its handling of tragedy and its fallout.’

The book opens with Chapter Zero and a bombing in Lajpat Nagar in May 1996. Chapter 1 and the subsequent pages then delve into the doings and undoings of—Deepa and Vikas Khurana who lose their two sons in the blast; Mansoor Ahmed, son of Sharif and Afsheen, and the boys’ friend who survives the blast; Shaukat ‘Shockie’ Guru, the perpetrator of the blast and the ‘leading bomb maker of the Jammu and Kashmir Islamic force’; and Malik Aziz who is accused of planting the bomb. This is a book not about terror as much as it is about the response of individuals to terror. And ultimately it is about the association of small bombs.

In the Lajpat Nagar blast, only a handful of people die. In an email interview from Austin, Texas, Mahajan says he chose to write about the victims and perpetrators of small blasts because ‘they are linked to a large international phenomenon, but their suffering is relatively—and I say this with a degree of irony—meaningless. Victims of these blasts are forced to make their own meaning out of what has happened to them. This makes them worthy subjects of inquiry for fiction’.

The search for meaning, the attempt to make sense of what defies logic and comprehension, is a key pursuit of literature. Nothing upends our understanding, shatters our worldview or tests our character like tragedy. Mahajan’s novel startles because it picks apart the anatomy of grief like a surgeon attempting to eviscerate a tumour. The author takes the tragedy and makes it part of the quotidian lives of the Khuranas, parents who have lost two sons, 11 and 13. This loss stains everything they do—how they fall asleep at night, the rhythms of their love-making, how they evaluate every decision they have ever made.

I ask Mahajan why grief appeals to him as an author. He says, ‘I find grief to be the most difficult and repetitive emotion. We live on a capitalist scale but tend to heal on a biological, even seasonal scale. This creates a dissonance in the lives of grief-struck characters. Rationally, they know something irreversible has happened, that someone, say, has died and won’t come back, but the mind takes years to accept this reality. Perhaps I like writing about grief because it means dealing with a kind of unreality—a mirror of fiction.’

The book thus reveals there is no ‘getting over’ a tragedy. It is more of adjusting to tragedy, and becoming habituated to it coexisting by your side. While Mansoor may have been ‘fortunate’ to have survived the blast, he suffers from an impairment of the arm which thwarts his dream of becoming a computer programmer. His parents, who had looked at the Khuranas as harbingers of bad luck ever since the blast, go on to have quite the worst luck ever. The arc of Mansoor’s life seems to answer the questions— ‘Why them (the Khurana boys) and not him? Why two of them and zero of him?’ His travel plans to the US doomed, his career dashed, and then falsely accused, Mansoor’s life is riven by tragedy.

We have the gift and the curse of reacting with relative indifference in India. We have too much going on to  concentrate on one tragedy for long

Mansoor’s character allowed Mahajan to further his initial immersion into philosophers like Schopenhauer, Camus and Sartre. He found that they were ‘death obsessed’. But he wondered, how is one to understand life-altering injury? ‘Isn’t that in some ways,’ he asks, ‘a worse sentence than pure termination? Mansoor’s struggles are a way of examining this. He carries a stain of death—an injury—from childhood and it rises to swallow him up.’

THIS IS A book (spoiler alert) in which two of the main characters die and one becomes a recluse. While the novel has some fine tongue-in-cheek moments and instances of levity, bleakness overwhelms all. The one main character who nearly goes unhinged but finally emerges the stronger of it is Deepa Khurana. The women in the novel don’t triumph, but unlike the men, they don’t perish either. Mahajan doled out these different fates to the sexes because he feels male entitlement in the country enervates men. He says, ‘A lot of the novel is about male entitlement and privilege— men reacting badly because they feel they’re entitled to a voice but aren’t being heard.’ He adds, ‘Males are protected in a patriarchal society and are less adept at dealing with primary emotions than women, who’re forced to come up with coping mechanisms. For this reason, Deepa emerges from the morass of the bombing despite all her suffering.’

Mahajan travels into the psyche of parents whose children have died, a man who survives a blast and sees the dead bodies of his friends and those who plant terror. To excavate the emotions and responses of people who’ve gone through such intensity requires imagination, but also veracity. We are unlikely to have known those who have gone through the same, but through this book we glimpse their responses.

Mahajan’s experiences in India have made this authenticity possible. From 2010 to 2012, he travelled through the country collecting stories of Indian entrepreneurs for a tech entrepreneur he worked for. He met a range of people— from a biotech czar to a man building a makeshift vehicle from a pump engine in a tier-III town. Mahajan says, ‘I wasn’t collecting information for a novel, but many impressions seeped into me. And many opened up to me about their lives.’

For the sake of the novel and in order to describe the trial of the accused, Mahajan did spend time at Patiala House in Delhi. He calls the courts ‘the true novels of India’. He spent so much time in one courtroom that he was noticed by a judge who asked what business he had there. When he said he was a novelist, he was promptly ordered to leave. The parents of the dead children initially harbour violent ideas of retribution and what they’d like to see done to the terrorists. But in court, when they see the accused, they grow dispirited. ‘Were these the people who had killed her children?’ Deepa wonders, ‘Their personalities did not add up to the bomb.’

The conversation around terror is most often one of polarities, ‘Us versus Them’, ‘Good versus Evil’; it is these binaries that Mahajan stays clear of. Those responsible for the blasts are motivated by politics rather than religion. They aren’t evil as much as they are angry and misguided. And often, those who are responsible get away, while the scapegoats get caught. At a time of ‘global terror,’ when bomb blasts have rattled even European countries, the response to terror is still very different between India and the West. And Mahajan uses the small blast to highlight this. He says, ‘We have the gift and the curse of reacting with relative indifference in India. We have too much going on to concentrate on one tragedy for long.’

This difference was made more stark to him recently. He was listening to the second season of the podcast Serial, where a sergeant goes missing from his base. The entire US army in Afghanistan is mobilised to find him. Mahajan realised that in India it would be hard to imagine so much attention being paid to one man. He says, ‘So, because we devalue the individual, these blasts vanish quickly from our consciousnesses. The individuals, meanwhile, suffer a great deal in private— whether they’re victims or people wrongfully arrested as terrorists. In the case of 26/11, India showed remarkable— and praiseworthy—restraint. A war would have solved nothing. This is a lesson the West can learn from us.’

While the larger politics of this novel might be terror and tragedy, justice and survival, it is also a book of the beautiful sentence and the unexpected turn of phrase. Mahajan’s use of the conjunction ‘as if’ is masterful. Sample this: ‘He saw the landscape, the dripping city with its thousands of watery, refracted lights; saw the dust on the yellow necks of the traffic lights; saw the torrid concrete undersides of the flyovers—saw it all and felt afraid, as if the city had recognized his guilt on the way home and would find a way to destroy him.’

Explaining his process of writing, Mahajan says, ‘I tend to see in images and my mind naturally reaches for comparisons. I also think dialectically—I can feel my mind swinging between opposites in the course of a sentence, between heat and cold, for example, between soft and hard; the sentences are an attempt to achieve a balance between these wild swings.’

These wild swings are part of Mahajan’s personal make up as well. He admits that while Delhi will always be his place of origin, he does feel ‘homeless and lost’. Like his characters he knows that he is part of the association of small bombs that tick away, reminding us that we are all at the mercy of forces we have no control over.