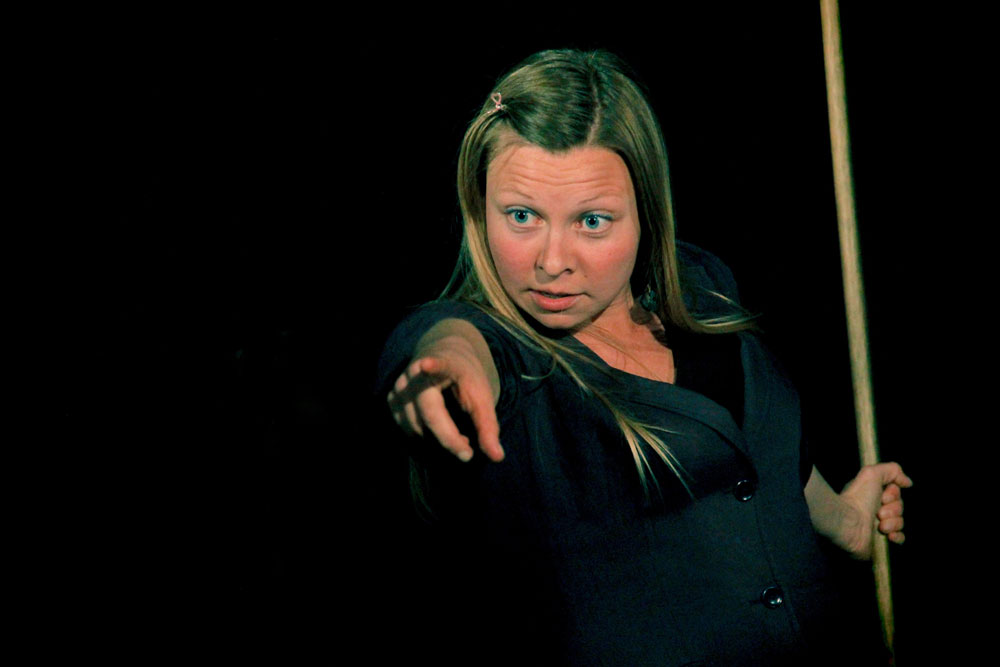 
“We all need stories, whatever age we are,” says the storyteller Emily Hennessey. She was speaking at the recently concluded Kathakar International Storytellers festival in Delhi. Hennessey brought together stories of trolls from Scandinavia, British folktales, and familiar goddesses and mythological characters from India. “We need storytellers now more than ever,” she believes, because in a life propelled by technology, she finds people are more divided and isolated than ever before.

Hennessey’s varied performances, tailored to the stories she is channeling, show the way in which a storyteller becomes a conduit. Whether it is the intensity she brings to her rendition of the Hindu goddess Kali’s story (where she is accompanied by a sitar player) or the enveloping softness in her portrayal of Father Frost, the heightened storytelling allows for these culturally important stories to be absorbed and passed on. There is a raw playfulness in these performances that set them apart from similar art forms such as conventional theatre.

“The storyteller’s job,” she says, “is to bring people together to share in a live experience, to be in the world of the unfolding story together. The storyteller’s role is to inspire, challenge, entertain, to make the listener question and through the illusion of the story, to shatter the illusions of life.” She believes that folktales, myths and epics are an essential way for children “to learn about the world, human nature, and the meaning of consequence and overcoming obstacles,” and believes that stories force us to question the world we live in.

She also sees these stories as a child’s first introduction to their own potential. “In stories they learn to be kind to the old lady in the forest, to share their last scrap of food, to be brave and take risks—to ride on the wolf’s back, to embark on the dangerous journey,” she says. In the realm of the story, the child becomes the hero who “fights the dragons and defeats the villains.” She stresses that there is an immediacy and skill that a storyteller brings to live performances that helps “broaden horizons, inspire the imagination and develop a deeper, more inquisitive and empathetic relationship with others and with the world.”

Stories have always been central to Hennessey’s life. Born on a small Swedish island called Gotland in the Baltic Sea, as a child she moved with her Swedish mother and British father to the Cotswolds. The Shire from the Lord of the Rings isn’t too far off from the backdrop of her childhood. Her parents read to her at bedtime, and they would make up stories together with Hennessey. Summers were spent with her grandparents in Sweden. Her Mormor (maternal grandmother) was a brilliant and funny storyteller. It was in Sweden that she was introduced to the Troll; “This curious, hairy creature was such a part of the landscape” to Hennessey who could sense it “lurking in the forest shadows, disguised as a mossy boulder, watching as my Mormor and I picked mushrooms and berries.” Her mother used to sing a lullaby to her and her siblings about a mother troll who ties together her children’s tails when she puts them to bed. She says, “It’s strange and beautiful at the same time. I now sing it for my son.”


Hennessey first encountered performance storytelling in 2011 when she was studying Drama and Theatre Studies at the University of Kent. Opting for a module in Storytelling, she was taught by the storyteller Dr Vayu Naidu who began her course by telling a story. Hennessey says, “I was blown away. With just words and subtle gesture, Vayu conjured up a whole world. It was absolutely magic.” Under Vayu’s tutelage, Hennessey, who had just returned from a stint of volunteer work in Nepal, immersed herself in stories from the subcontinent as well as from Scandinavia. The gods and goddesses she had grown familiar with at shrines and temples she was re-acquainted with in stories.

The stage was a humbling platform on which to learn. With Vayu’s guidance, a small group began to perform stories, often as an ensemble, to audiences in schools, local farmers’ markets, refugee centers and festivals. “It’s a difficult craft,” Hennessey says, “and this was about being thrown in the deep end and having to learn to swim quickly! I think stand-up comedians have to go through the same thing—sometimes flopping terribly but getting back up and trying again and again, and finally beginning to learn what works and what doesn’t.” She credits Vayu with helping her find her own storytelling voice and telling stories she personally loves.

Hennessey’s ties with Indian myths and performance forms grew stronger with time. In the UK, she’s part of the Pandvani108 ensemble which is a group of storytellers and musicians who tell stories from across world myth and epic in a style inspired by the Pandvani form popular in Chhattisgarh, Madhya Pradesh, Orissa and Andhra Pradesh. Traditionally, the Pandvani form involves folk singing of tales from the Mahabharata. The small band of musicians in Pandvani108 take turns to be the teller and the Ragi. Hennessey finds the Ragi a particularly interesting and constantly evolving character who sometimes guides the rasa (loosely translated as essence) of the performance, and sometimes asks the teller questions the audience may be thinking. The Ragi, she explains, keeps the teller on their toes, plays the clown, and forms a bridge between the audience and the story.

The troupe has been inspired by the traditional use of an ektara in Pandvani performances as not only a musical instrument “but also as a tool for gesture and heightened physicality.” They use sticks in their performances to achieve similar ends. Hennessey has brought sticks into her solo performances as well where she uses them to give strength and definition to gestures. Like for Pandvani performers, it is more than a prop for her, it is a real companion on the stage.

At the Fabula Festival in Stockholm a few years ago, the Pandvani performer, Ritu Verma, her Ragi Uday-ji, and her group of musicians performed and ran a workshop for a small group of Pandvani students that included Hennessey. Apart from exploring performance style, physicality, voice, song, and the role of the Ragi, Ritu taught the students that Rasa is at the heart of the stories and the performances. Hennessey says, “This is something I don’t think we really have a language for in the West. It’s there in the stories. In the atmosphere in the space. In the relationship with the audience. It’s become something integral to the way I now work.”

Another subcontinental influence in Hennessey’s life has come from the sitar player and composer, Sheema Mukherjee, who absorbed both North Indian classical music and the Western tradition, studying sitar and Indian classical music under the tutelage of her uncle, the Late Pandit Nikhil Banerjee and then with the Late Ustad Ali Akbar Khan. Mukherjee and Hennessey collaborate frequently including on their shows, Kali and The Ramayana. Their show changes with each performance as the dynamic between the two is playful and trusting. She says, “It makes for a great on-stage relationship. Her music is an integral part of the storytelling, with her music telling the story as much as my words.”

Closer home, the Norse Myths fascinate her as their gods are often as flawed as mortals. The first longer piece of mythology she ever created and performed was about Loki, the trickster god. She sees him as a catalyst without him most Norse myths wouldn’t exist and Asgard, the realm of the Gods, would be a very boring place. “There’s something very human about him, but very other too. We all need a bit of his trickster nature in us. But we must know where to draw the line, where Loki doesn’t.”

It’s a performance that’s softened over time. She says, “These stories can be very masculine, quite cold and violent. Over the years, I think I’ve been finding more warmth, more humanity and playfulness. It’s too easy to take ourselves very seriously in life. These epic stories, and the Indian myths I work with too, remind me that life is—yes, serious—but also a wild, wonderful, often ridiculous rollercoaster of a journey.”