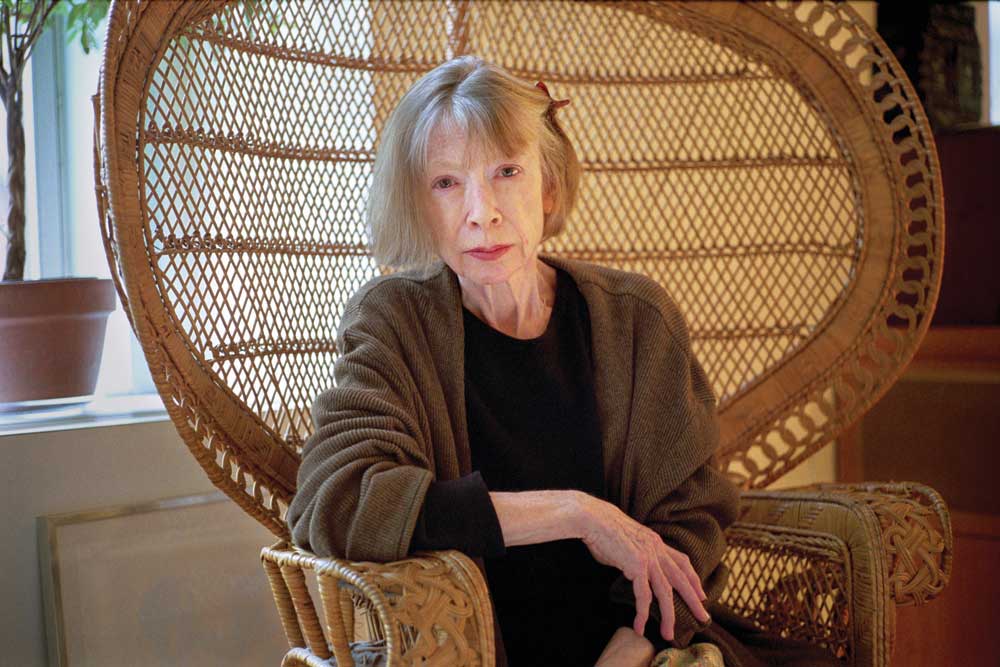 CAN A DOCUMENTARY on an author be revelatory? Don’t we already know her from the page? What more can celluloid tell us? The recently released documentary The Center Will Not Hold on ‘literary legend’ Joan Didion, directed by her nephew Griffin Dunne, does tell us more. It takes Didion out of words, embodies her into a person, and highlights why she is relevant to our times. More importantly, while being a biography of a person, it is also a master- class in journalism.

To the uninitiated; Didion, 83, is an American journalist, author and playwright. She started her career in Vogue, and wrote a range of reported essays on fashion to ‘self-respect’. She ascended into attention as the 32-year-old writer of ‘Slouching Towards Bethlehem’, published in 1967. Her story was the hippies. Her site Haight-Ashbury, a district of San Francisco, California. And her conclusion: ‘the center was not holding’. She knows the blood-dimmed tide is loosed when she meets a child on a living room-floor. The child keeps licking her lips in concentration. The only off thing about her is that she’s wearing white lipstick. A five-year-old on acid, Didion the reporter realises.

Dunne asks her onscreen, “What was it like to be a journalist in the room when you saw a little kid on acid?” “Well it was…” She stops. Her arms whiz in the air. Seconds go by. Six, to be precise. “Let me tell you, it was gold.” She adds, “That is the long and the short of it. You live for moments like that… if you’re doing a piece…”

That moment scrunches up a journalistic and moral dilemma; when you see something extraordinary, how do you respond? Do you simply report? Or do you attempt to help? In Didion’s lengthy pause, we hear author Toni Morrison; ‘There is this feeling that artists have— photographers, more than other people, and writers—that they are acting like a succubus… this process of taking from something that’s alive and using it for one’s own purposes. You can do it with trees, butterflies, or human beings. Making a little life for oneself by scavenging other people’s lives is a big question, and it does have moral and ethical implications.’ This documentary, while being an unabashed tribute to Didion, also prods us to remember that pith of journalism; it is about making a little life for oneself. By taking from the lives of others.

As a star journalist, Didion knows this all too well. And never shies away from acknowledging it. In the preface to her book Slouching Towards Bethlehem, she writes, ‘My only advantage as a reporter is that I am so physically small, so temperamentally unobtrusive, and so neurotically inarticulate that people tend to forget that my presence runs counter to their best interests. And it always does. That is one last thing to remember: writers are always selling somebody out.’

Didion’s work arises from this deep self-awareness. She knows that the crux of her trade is to eventually sell somebody out. It could be the rudderless hippies, ‘brilliantly evil’ Dick Cheney, or the prejudices that blindside us. The article that truly highlights the acuity of her observations and intellect is ‘New York: Sentimental Journeys’ (published in The New York Review of Books, 1991). Dunne’s film lays out the context for this essay by first cutting to news footage of the incident. A news anchor in a screen grab says, “‘Wilding’. New York City police say that’s new teenage slang for rampaging in wolf packs, attacking people just for the fun of it.” A woman jogging in Central Park was raped and nearly beaten to death. She was White, a Wall Street investment banker. The accused were young Black boys. Dunne asks his aunt what drew her to the Central Park jogger case. “Everything about that story was a lie,” she says on screen, her arms darting like a dragonfly. Robert Silvers, the founding editor of NYRB, explains Didion’s misgivings about this story, which was being reported as a Black-versus-White story, an evil-versus-good tale. One section saw the Central Park rape as a city ‘ruined by its underclass’. While others believed that the vilification of the Black teenagers represented their own victimisation. In ‘Sentimental Journeys’, Didion strips the Central Park rape story of its rhetoric. Her essay isn’t an investigation of the crime itself; it is an inquiry into its media coverage and society’s assumptions.

She writes in ‘Sentimental Journeys’: ‘Stories in which terrible crimes are inflicted on innocent victims, offering as they do a similarly sentimental reading of class differences and human suffering… have long performed as the city’s endorphins, a built-in source of natural morphine working to blur the edges of real and to a great extent insoluble problems.’ The brilliance of Didion is that when she writes of the New York of the 90s, she could well be speaking of the Delhi of today. This paragraph holds true for so much of crime reporting in India, be it the Nirbhaya case or the recent murder of the school child at Ryan International. Unlike the rest of her tribe, she moved away from the personal stories and pointed her pen at the class antagonism and economic failures of the city.

While Didion might be known for her journalism, the books that made her a household name rose from awful grief. Her husband, and fellow author, John Gregory Dunne died of a heart attack in 2003. In 2005, she wrote a portrait of bereavement, The Year of Magical Thinking. The Center Will Not Hold can, of course, be accused of nepotism. But the nephew-aunt bond allows for an intimacy between interviewer and subject that otherwise could not have been possible. This documentary is also a love story. A love story between two kindred souls who built scripts and a family together. And a love story with a savage ending. Quintana Roo Dunne, Didion’s daughter, dies a year-and-a-half after her father’s death. She was 39.

READERS FAMILIAR WITH Blue Nights (2011, about the death of Quintana) and The Year of Magical Thinking know that Didion’s life spirals towards tragedy, yet the foreseeable plot is heartbreaking in the film. The Year of Magical Thinking and Blue Nights are works of majestic brilliance. Her writing has the clarity of sun rays on winter mornings; luminescent with light and not heat.

Loss is inevitable. But how do you report on grief that can obliterate you? How do you investigate the suffering that follows the disappearance of a husband and daughter in quick succession? The books exemplify Didion’s belief—if you examine something closely, its potential to frighten dims.

All of writing is a performance, a writer directing an ensemble of words and sentences. In this documentary we see Didion surrounded by the swish set of the 70s, whether it is Janis Joplin or Steven Spielberg or Warren Beatty. She surrenders to the persona of the female author of elfin musculature and eccentric tics. (When she hits a roadblock, she puts the manuscript in a packet in the freezer, an actual freezer.) But the documentary, made with Didion in her 80s, goes beyond the image. As she ages and attenuates, she seems to move from human to ethereal. This keeper of notebooks knows that soon all that will be left of her are her words. Words that remind us: ‘I know that if we are to live ourselves, there comes a point at which we must relinquish the dead, let them go, keep them dead. Let them become the photograph on the table. Let them become the name on the trust accounts. Let go of them in the water.’