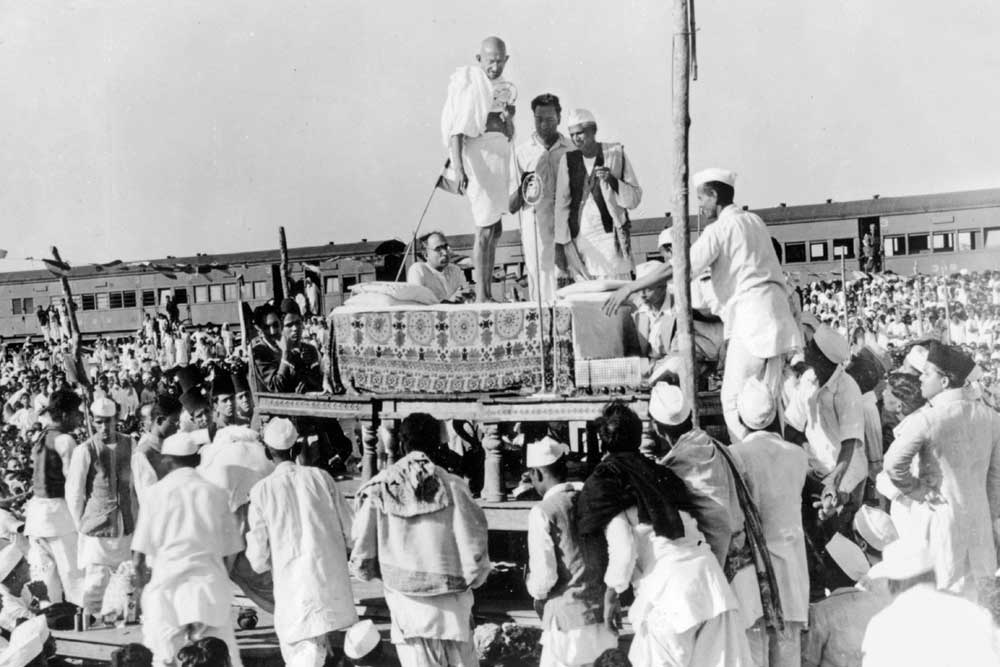 THE ADVENT OF the railways in India, like the advent of new technology everywhere, inspired opportunity while also provoking subversion. There were pioneers who envisioned a network to weld the country together as never before, while others, like Gandhi, perceived such welding as a means for “bad men [to] fulfill their evil designs with greater rapidity”. “There may be no diamonds at Golconda,” one commercially motivated baddie declared, “but there is the worth of a ship-load of diamonds in the cotton fields of the Deccan.” A few defeated souls also saw promise in the railway track. On his way to exile in Burma after 1857, the fallen badshah of Delhi beheld from his bullock cart the construction of railway lines, recalling perhaps his own proclamation promising merchants subsidised access to ‘steam-vessels and steam-carriages’ if the Mughal imperium were restored. The British thwarted such restoration, realising in the process that in an alien land, the railways also held military potential in putting down mutinous emperors with mutinous designs.

The railways in India animated diverse minds, from Rudyard Kipling and Florence Nightingale to Tagore and RK Narayan. The debate on its introduction in the Subcontinent began in the 1830s, and the concerns raised were many. Would, for instance, ‘the Hindoos’, with their caste and religious paranoia, embrace rail travel and contribute to its economic viability? As it happened, they did: The journey from Calcutta to the Puri temple was marvellously shrunk from 26 days to 12 hours. Others thought the fire carriage a wasteful enterprise altogether— India’s destiny lay in developing waterways, argued its most committed promoter, Sir Arthur Cotton, whose 3,000 statues stand testament to his efforts in this direction in the Godavari belt. And there were yet others who welcomed rail for its political possibilities. ‘If India is to become a homogenous nation,’ argued Sir T Madhava Rao, ‘it must be by means of the Railways [and]…the English language.’

Naturally, the historical evolution of rail in India, today the fourth largest network in the world with billions of passengers and 1.3 million employees, opens up more than a linear set of discussions on its diverse and often contradictory implications. And these themes have been approached by not one but two books in 2017, neither of which, mercifully, falls into the trap of romanticising its protagonist excessively. The first of these, Indian Railways: The Weaving of a National Tapestry, is a joint effort by Bibek Debroy, Sanjay Chadha and Vidya Krishnamurthi, covering the dawn of the project till Independence in 1947. ‘The railways,’ its back cover states, ‘brought modernity to India’, and the book is an ‘engagingly written, anecdotally told history’ of an institution that ‘still weaves the nation together.’ It is an appealing blurb, and the credentials of the authors, who were colleagues on an official railway committee, are impressive.

The book they have jointly produced, however, is not the book the cover advertises—perhaps it is a case of too many cooks (there is also a foreword by Gurcharan Das), or perhaps the concept of what an engaging text looks like has grown more orthodox. While Indian Railways offers remarkable information, it is held together by prose that is uninspiring. Not enough effort has been devoted to turning what often reads like a first draft into a polished, memorable volume that can appeal to readers outside academia or government. There are moments when the book shines, but it cannot be said that this quality pervades the text—a disappointing conclusion to reach when the original ingredients are most amenable to excellent narration: Elements such as the 1854 book on railways written in Marathi, or that thrilling 1857 episode involving 15 Englishmen and women stranded on a water tank surrounded by 3,000 baying rebels. There is the saga of the rivalry between two railway companies, and the newspaper vehemence of the anonymous ‘C’ and ‘P’ on the viability of rail in India. The stories are certainly present in Indian Railways. It is the storytelling that is absent.

Debroy, Chadha and Krishnamurthi are fascinated by their subject, but in writing a book on a topic so full of potential, a little more narrative effort—or editorial investment—could have vastly altered their offering for the better. So pages 97- 107 with a table on ‘Evolution of Policies and Committees, 1850-1947’ is a valuable repository of information, but does little to enliven the manner in which these policies came to be, the human actors involved, and the competing vested interests that decided the course of the railways in our land. For a book subtitled The Weaving of a National Tapestry, the text is preoccupied with the institution itself, meting out, at best, step-motherly treatment to wider, evolving trajectories that were often led by the railways themselves, or of the social forces at play, at different times in different contexts. As an encapsulation of essential information, Indian Railways wins. As something that promises a greater adventure, the book leaves one disappointed.

IT IS HERE that Arup K Chatterjee’s The Purveyors of Destiny serves as a more satisfying read, touching deftly on the economics and politics of the railways without neglecting the rich social landscape they traversed. The book is not merely a more readable account of the chronology of the railways, but also about what they came to symbolise at different times; of the purpose they served in the hands of different actors with different intentions. Chatterjee declares, perhaps a little ominously, that ‘an excess of probity, proof or empirical data’ has been avoided in the book, which still, nevertheless, holds over 600 citations, and points the academically inclined towards more extensive resources and material of interest. Narrative appeal, in his book, has not been sacrificed at the altar of textbook exactness, and he succeeds in striking a healthy, confident balance.

The result is that Chatterjee’s book feels like a more complete approach to the story of the railways, going beyond institutional development into its numerous roles. The railways at one time could be, as he quotes, ‘clandestine spaces for experimentation’, where ‘vegetarian looking businessmen’ tasted mutton and beef. To upper-class Indians before nationalism took root, the railways supplied ‘aristocracy in proxy’ and gave Englishmen in India—and those Indians seeking to be English—‘a nominal provincial Europe’ on wheels. Then there is the nostalgia with which everyone tends to approach the railways. So one commentator, in whose day trains served table-top meals with service by waiters in white, laments the ‘soggy cardboard box’ in which the ‘amlet’ and ‘toas’ came to be served, oblivious that to later generations (including my own) it was precisely those soggy cardboard-box meals that made the prospect of a railway journey exciting. So too there is horror—in 1947, the railways became bringers of death, photographs revealing their bloody service to the cause that was Partition.

The railways that took so many avatars—Chatterjee tells in a style that for most part comfortably moves from lucid to philosophical to occasionally academic—‘were built with the ideology of ‘intermeshing’ the economies of Britain and India, or more practically of India into Britain’s’ and by the 1890s had ‘reduced the subcontinent to a twentieth of its temporal expanse’. With majestic stations like Victoria Terminus and Howrah, the railways manifested the intimidating grandeur of the Raj, reinforcing imperial supremacy. Yet, as the railways transported not just people but also aspirations of unity, masterful leaders like Gandhi Indianised these symbols. ‘The railways were used for truly secular purposes by Gandhi. He had no qualms about seeking donations, aboard them, or on platforms for the Satyagraha movement,’ and every station became a platform for the nationalist cause. Revolutionaries disrupted railway lines, and ticketless travelling and chain-pulling became acts of civil disobedience. In a generation, the railways went from exemplifying the civilising mission of the English to transporting Indian resistance and embodying national resilience.

Chatterjee’s book, which has aspects in common with the better parts of Indian Railways, brings the story down to current times, towards the end focusing heavily, and perhaps somewhat jarringly, on cinema and its changing conception of the railways. Through much of the text, the reader feels every motivation to turn the pages, without tedium, given the variety of scenes across time and context through which we are transported— there is splendour as well as shock, elegance as well as embarrassment, the past as well as our present. Chatterjee promises a cultural biography of the railways, but what he delivers is something more, and his book will rank high among all those that have made compelling efforts to bring alive the many worlds of the Indian railways, worlds in which its carriages and engines have served as both witnesses and participants.