Amitava Kumar’s A Matter of Rats casts Patna in a triple role of memory, magnet and mundanity. It is a good book. With one more nudge, it could have been a great one 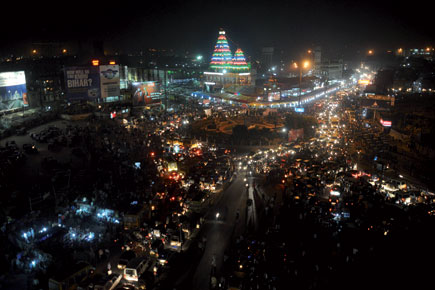 Amitava Kumar’s A Matter of Rats casts Patna in a triple role of memory, magnet and mundanity. It is a good book. With one more nudge, it could have been a great one


Amitava’s Kumar biography of Patna, A Matter of Rats, is in ‘meow-meow English’. A rodent’s tale told with a feline tread may sound like a mixed metaphor, even a paradox, but then that’s what Kumar makes of his hometown, Bihar’s capital: a city in which depression and exhilaration are twins that were, as in the movies, separated at birth.

And he chooses to tell its story through a collection of stories: a journey into Bihar’s countryside to investigate a Swiftian Modest Proposal to tandoor-ise rats (giving new meaning to the term ‘killing fields’); a schoolboy’s sketches of Patna’s long-lost historical grandeur; Shiva Naipaul’s slippery reportage on Bihar; Patna in a triple-role of memory, magnet and mundanity—or, Heaven, Hell and Earth; a very Bihari romance gone sour; and finally, an angst-filled epilogue.

It’s a compelling read and at 140 pages, it’s breezy as well. However. In the background of any biography of an Indian city will always loom Suketu Mehta’s take on Bombay, Maximum City, and while you may argue that the scope and portraiture of the two books are incomparable, the intent of the two is without a doubt similarly ambitious. Certainly, A Matter of Rats is no milk-and-water cop-out like Amit Chaudhuri’s take on Calcutta, and Amitava Kumar’s collection stands on its own as a fine book. Yet, when you read it, you can only wonder what could have been.

Much was expected of Amitava Kumar. His last book, A Foreigner Carrying in the Crook of His Arm a Tiny Bomb, was a meticulous piece of journalism about two terror convicts whose stories served as a left-wing critique of America’s War on Terror.

As is true of the best intellectuals, Kumar is able to discern (and join the discourse on) the intertwined strands of politics and language, and he does so in A Matter of Rats, keeping company with poets whose words try and restructure the social order (and also with those like Patna-born Ravish Kumar, award-winning NDTV journalist, of whom a Delhi University professor said: “[His] kind of language comes from someone who has social understanding.”). And of course, as an English professor at Vassar College in the US, he’s a non-resident Pataniya, which brings up the wise old saying: you can take a boy out of Bihar, but you can’t take Bihar out of a boy. (He confesses, though, that when he visits Patna he sees it with an outsider’s eye.)

Still, the book works quite nicely as it is. It begins with ‘The Rat’s Guide’, a meditation on rats, with startling facts about rats (they get drunk in Patna), and a visit to watch members of the Musahar community catch rats—with their bare hands—in a field. Musahars are pretty much the Dalits of Dalits. A bureaucrat tells Kumar of his dream to get people eating rats (they’re tastier than chicken, a Musahar named Sinhasan tells Kumar), not to change the popular perception of rats as much to change the perception of Musahars. This trip into primitivism makes Kumar muse about the highway to progress—‘It was littered with fresh carnage.’ It is a shrewd and engaging piece of reportage.

Since rats show up nowhere else in the book but figure in its title, you have to wonder if Kumar was just setting the book up with a chapter that shows the hopelessness of Bihar’s backwardness to heighten the drama of the following chapters, or whether he was presenting a metaphor of Biharis as creatures of resilience, with an ability to gnaw through concrete and go two weeks without sleeping. Perhaps it was both, for the next chapter time-machines through Bihar’s glorious history and Patna’s past as the Subcontinent’s first grand city. It would have simply been a better-told version of the innumerable lectures my father gave me growing up if it hadn’t been for the story of Napoleon’s bed ending up in Patna. Yes. You’ll have to read it to believe it.

Most Biharis feel shortchanged by the way their state and even Patna are portrayed in literature and the media; eventhe Urdu journal Al Punch in 1906 ‘reported that paikhana, or excrement, was being thrown from cars at the east end of the park at 10 pm every night’. Kumar gives us a compendium of literary praise, mentions and run-downs; but one delicious anecdote concerns VS Naipaul’s younger brother Shiva, who was scathing in his writing about Bihar—possibly because he slipped and fell in some mud. Yes, do read it.

Then comes the interesting analysis of the three types of Pataniyas: the emigrants, the immigrants and the ones trapped in between. The first category includes the conceptual artist Subodh Gupta, who in part has made it big by referencing very elemental fragments from his early life in rural Patna.

The last category includes Anand Kumar—from whom Amitava Kumar picked up the ‘lovely, eloquent phrase “meow-meow English”’, indicating the privileged in Patna society—a child prodigy who never made use of a Cambridge admission for mathematics due to poverty and the untimely death of his father, but who now runs an IIT-entrance-exam tuition centre that is so successful that rival coaching centres hurl bombs at it. (Imagine how impoverished Anurag Kashyap’s cinematic imagination would be without the reality of Bihar.)

The emigrants include a steady stream mostly from around the state, arriving for medical treatment, employment or political activism; like Irfan, who came to Patna from Allahabad to design a magazine and married a beedi worker before leaving for Delhi to work in television. As Kumar says, the marriage ‘was a rebuke to every academic leftist I knew’.

The book’s last chapter is the love story of tattered poet Raghav and the much-younger Leela, whose title is taken from a song from Anurag Kashyap’s Dev D, namely Emotional Atyachaar. It is filled with love, strangeness, bitterness, public-laundering and poetry. It is very much a metaphor for Patna, and could have only followed the rest of the book as an emotional punctuation mark. It is, along with ‘The Rat’s Guide’, a bookend for the collection.

It isn’t, of course, the final word. That comes in a short, poignant epilogue about Kumar’s parents, who are on their inexorable march towards life’s only certainty: its end. They are what bring Kumar back to Patna, again and again; and on each trip, he sees them visibly age a bit more. They are ultimately his measure of Patna. They are why, though Kumar loves Patna, he is scared to death of it.

A Matter of Rats is a good book, a satisfying read. The characters are sharply etched, highly memorable, and unlike in Maximum City there are no ‘composite’ characters here. Each person is true and alive, in all senses. Yet in the end, it is so good that you think: one more nudge, and it could have been a great book. But you should read it, even if you’re not a Pataniya.