Gulzar’s Ode to the Age of News

The noise of time 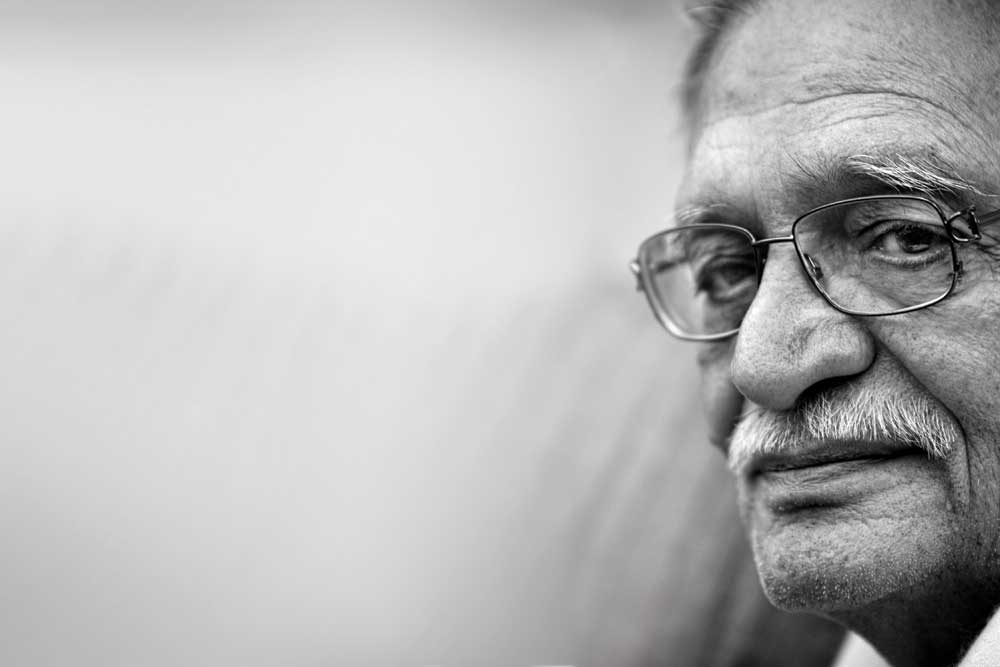 IN A SONG that clings to girlhoods like mine, a girl in Gulzar’s film Ijaazat (1987)—played with attractive vulnerability by Anuradha Patel—sings ‘Mera woh saman lauta do …’ The girl’s name was—had to be—Maya. It was a mark of love in the age of socialism— that romantic love, if it came at all, would be fleeting, and that its life could be recorded only in a love letter. It was a world so delicately private that the viewer almost felt guilty to be eavesdropping on the conversation between the lovers. The things catalogued in the love letter that Maya wanted back from her lover were so non-materialist that they could be the stuff of a joke for cynics: a mole on the lover’s back, a wet umbrella, half of the shared wetness of the rain that Maya now wants back, the smell of wet mehendi, and so on.

Gulzar’s Suspected Poems comes nearly three decades after that love letter. The world has changed. India has changed. Everything’s added weight onto itself—the wallet, ambition, worries, the number of channels on television, the number of countries, cultures and cuisines we’ve experienced, free miles, our secrets, and, among other things, the number of people in our voices and heads. That love letter, private, delicate, subtle, its rhetoric more hidden than expressed, is a thing of the past—not because emails and text messages have replaced it, but because its time is gone. This is the age of the mob, of the crowd, of the public, so much so that ‘republic’ (now also the name of a sessions court on television) comes to my ears as ‘re-public’, a repetition of the public voice over and over again. This is the Age of News.

Suspected Poems often reads like found poems—a collage of ‘Breaking News’ headlines. One is filled with nostalgia: not only for a pre-News time, but also for the older—actually younger—Gulzar. As I write this, almost as if to snuff out the noisiness of news from my ears, the title of one of his films brings calm: Khamoshi. Silence, now extinct. Now the same lines play on repeat, and there’s no difference between news and poetry, news and music, news and fiction—the ‘same news’ remixed.

How long can one munch
The chewing gum of daily statements?
Now one has come to learn
Just spit it out
If the mouth can take no more.

Or else add some zarda
To a betel leaf
And quaff the paan around
With some aromatic qimam put
on it –
Just keep on swallowing time!’
(‘The Same News’)

The ingestion of news and its lack of nutrition to the being—chewing gum and paan and zarda and qimam in the poem—are the equivalent of junk food, useless but attractive, a part of the ritual of modern living. ‘Brackish news’ sounds like ‘breaking news’ and Gulzar’s translator, Pavan K Varma, is aware of that resonance—that this is a poem about the eating of news (I can’t resist adding that in Bangla ‘khabar’ and ‘khaabar’, news and food respectively, sound almost the same).

The exhaustion with news is reported over and over again, and it’s a part of Gulzar’s aesthetic, as if it were a mimicry of the process of how we become desensitised to news.

‘As I took up the newspaper
Some small, insignificant stories fell
into my lap.’ (‘Newspaper’)

Gulzar then gives us a list of these ‘small, insignificant stories’: ‘a child, thrown into a dustbin/Was kept alive/By a dog who suckled him for three days’; a Sikh, asked for ‘any birthmark’ by the ‘Passport Commissioner’, takes off his shirt and says, ‘There is a burn mark, Sirji,/From ’84/This can’t be erased!’. The ‘small’ of ‘chhoti-chhoti khabrey’ is, of course, a moral, and in these poems that are an assessment of Indian life—a public life, a life reported by the media, so much so that they now seem to be the only identity available to and adopted by the Indian—Gulzar turns to the prosaic for poetry, clichés to highlight the clichés of newsdom.

‘This latest news is news only for today/Like fresh green vegetables/That must be consumed today, or forgotten’ (‘This Latest News’).

When the country’s favourite lyricist chooses to abandon the rich surplus of his astonishing metaphors, it says something about the psychological life of a seventy-year- old nation. ‘These ‘new’ pictures we saw even then/When there was no camera …’. ‘There is nothing really new in New Delhi’. ‘I am caught in a traffic jam/For the last seventy years!’ ‘Poverty is older than our culture!’

The staleness of news and the unchanging nature of the nation’s ailments that provide both the subject and spare lines of these poems—the reason Gulzar ironically qualifies them as ‘suspected’—make this collection an oxymoron: a permanent newspaper. In a brave move, Gulzar abandons the elegance of his older idiom for a mimetic representation of the noise around what the nation wants to know. In this, he, again mimicking the tone and temper of the times, moves from the aesthetic to the sociological. Suspected Poems is a record of that shift. Even love must be a news item, not Maya’s letter.