Being feminine is so natural in this celebration of the Northeast 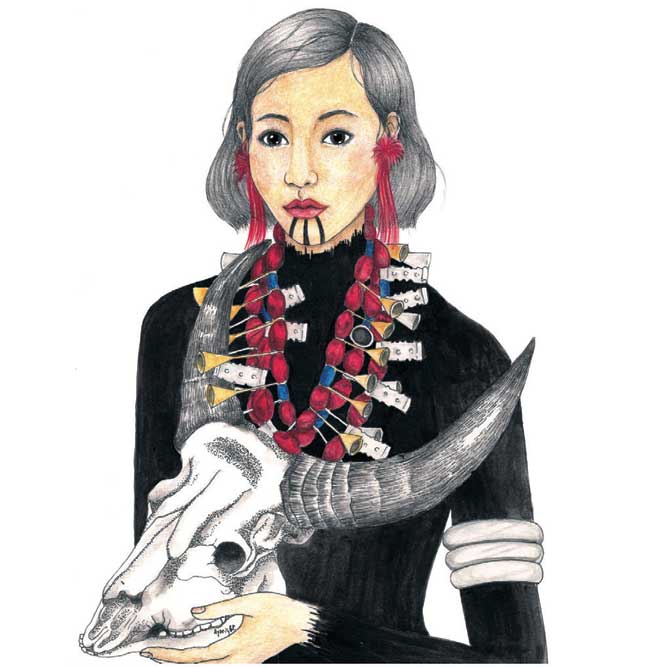 THERE’S A BEAUTIFUL, almost cheeky, red herring in the very positioning of Centrepiece: New Writing And Art From Northeast India, a comprehensive anthology of non- fiction, fiction, poetry, photography and visual art edited by graphic novelist Parismita Singh. Nowhere on the front or back covers does the word ‘women’ appear, but in contributor bio after contributor bio, the pronouns ‘she’ and ‘her’ repeat. (A little earnest fact- checking reveals that one of a duo does not identify as female, but the coup is nearly complete). In this manner, the ‘centre’ of the title is apparent: imagine a world so woman-centric that it need not be announced.

Centrepiece is primarily concerned with women’s work, not work that is gendered, but labour of all kinds that is limited, encouraged or affected in some way by gender. ‘I reject the idea that work is related only to money or food,’ writes Aungmakhai Chak in The Objects of Everyday Work: A Photo Essay, which explores a non-capitalist understanding of beauty through the crafting of tobacco pipes, baskets, earthen jars and woven clothing. Rini Barman’s wonderful piece, Hands That Brew, is on rice liquor and the gendered politics behind it, while Daksare Sketches: Through The Needle and the Loom by Bumbum studio’s Shreya Debi and Bilseng R Marak (the duo mentioned above) is about their own work with fabrics, inspired by the daily movements of women and girls.

These are but some examples; the anthology features over 30 outstanding contributions. Singh’s curation of poetry and artwork is to be praised. Never does either feel like filler material amongst prose and photo-essays. Each genre— from nearly academic papers to hashtag poetry—is given its due, with impressive selections. There is an even contrast between the explicit, such as Dolly Kikon’s paper, Women At Work: The Gender, Culture, And Customary Law Debate in Nagaland, and the unspoken, such as Zubeni Lotha’s untitled photograph of women in military gear, wearing gigantic hornbill headgear.

Among the poems, Soibam Haripriya’s Curfew is particularly evocative, finely blending both gender and governmental limitations. It begins, ‘curfew and rains,/ and you are home/ thinking slowly/ of how life evades you’ then reveals its preoccupation—there is a baby bawling, and the narrator longs for the time before she ‘became/ a pair of milch breasts’, for now she knows, ‘Biology is your arch enemy.’

Visual art suffuses the collection. Mayel Lyang by Alyen Leeachum Foning is a lovely tale of travel and homecoming that uses the handiwork of several artists. The book ends with a spectacular painting: in Kundo Yumnam’s Self Portrait, 17th May 2017, a woman draws milk-like threads from her heavy nipples, and knits them together. She is headless; the threads swirl around her torso as though in orbit.

The fiction here often plays with the meta-narrative. Jacqueline Zote recounts Mizo lore in The Other Side of the Looking Glass: Retelling of Mizo Folktales , in which a woman tells children, bored during a power cut, stories by candlelight. In Women’s Literature by Sanatombi Ningombam, a woman attempts to write through a day full of half-rinsed laundry, pots spilling over on the stove and other domestic demands. There’s no chance of success, and only as she crumples up her work in frustration does her husband raise his head from his food to notice it. ‘What is it that you are so angrily tearing up?’ he asks. ‘It’s women’s literature, women’s literature,’ she says.

Centrepiece is a gorgeous collection, with page after page of beauty and surprise. What emerges is a heterogeneous series of portraits and worldviews. There is a clear—and admirable—refusal to pander to the non-Northeastern gaze, and so an outsider reader does not suffer from a niggling sense of voyeurism either. Both female experiences and the distinct cultures of the Northeast are given primacy in a rare and rewarding way. There is so much here to enjoy and be educated by.