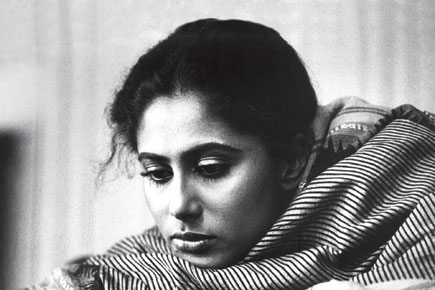 One of the most cutting things a reviewer can say about a personality-centred book is that it is hagiographical; that the author has chosen veneration over discernment. This charge is sometimes a little unfair though. It is one thing for a book to be deceitful or compromised—perhaps because it is an authorised, controlled biography, or because the writer has a hidden agenda—but when the foundation stones are honesty and seriousness of intent, why should someone writing about a favourite person be obliged to maintain a discreet distance? After all, the best reason to write a book is that you are driven to write it—passionate about the subject, more willing to devote years of your life to it than most other fans would be. Surely a truthful expression of that passion is preferable to sap-headed ‘objectivity’.

Which brings me to Maithili Rao’s intense, deeply felt tribute Smita Patil, whose subtitle ‘A Brief Incandescence’ is not just an apt description of Patil’s much-too-short life and how brightly she shone in the time given to her, but may also prepare you for the sometimes florid writing in these pages.

Rao’s position is clear from the opening lines: ‘She was Indian cinema’s Everywoman. Her genius shone through in rendering the everywoman extraordinaire with a signature hypnotic allure, a depth charged with intensity that exploded into emotions on celluloid’. Some might think this effusive enough for one page, but a few lines down you find, among other descriptions, ‘haunting presence’, ‘finely sculpted face’, ‘wilful and generous mouth’, ‘voice vibrating with emotion’, ‘the proud carriage of a born fighter’, and ‘tensile strength of steel balanced with the suppleness of a reed’.

I list these partly to caution those of you who get put off by this sort of prose, but also to tell the more open- minded among you to persevere regardless—because there are many good things in this book if you are interested in Patil and the cinema that she was such a vital part of. Speaking for myself, mild annoyance with some of the overwriting and the repeated descriptions of Patil’s bone structure gave way to a growing respect for the author’s Smita-adoration and a willingness to be swept along by it.

This isn’t a conventional biography, Rao says in her introduction. She does provide basic background information about the Pune girl who went to Mumbai in her teens, became a Marathi newsreader for Doordarshan in the early 1970s and then found her way into cinema (and into the moment of the Indian New Wave) via Arun Khopkar’s diploma short Teevra Madhyam, but the bulk of the book looks at Patil’s key films, their sociological impact, what her presence added to them, and the reservoirs in her personality that informed her performances. Through her own analyses and the observations of those who had known Patil, she dissects her strengths as a performer: stillness, intensity, instinct—the last of those being particularly important for someone who, unlike most of her peers, had never been to the FTII or studied acting formally.

Rao’s assertions that ‘there are more peaks [of great performances] in Smita’s extraordinary career than any comparable figure of that time’ or that she was ‘indubitably the pole star of parallel cinema’ are debatable—but they form the basis of the book’s longest chapter, ‘Smita Patil and her Dasavatars’, in which she closely examines such films as Shyam Benegal’s Bhumika, Jabbar Patel’s Umbartha, Mahesh Bhatt’s Arth and Mrinal Sen’s Akaler Sandhane; the two chapters that follow deal with other movies, ranging from Ketan Mehta’s superb Bhavni Bhavai to Akbar Khan’s clunker Haadsa. Around this point she also rips into the many low-grade mainstream films that Patil chose to do. The little boy in me, who had loved B Subhash’s Dance Dance when it came out, bristled a little at Rao’s dismissal of it, but then ceded her points. (Even at age 10, I think I had understood that the long-suffering sister and wife Smita played in that film was a cipher, her fate little more than a pretext for Mithun to flex both muscles and angst, and for Shakti Kapoor to make an uncharacteristic sacrifice in the climax.) Happily, she does also acknowledge some of Patil’s more notable mainstream work such as JP Dutta’s epic Ghulami.

There is much in these analyses to chew on and appreciate, or—as a professional nitpicker—to disagree with. For instance, the 1974 Charandas Chor is very far from ‘a minor film’, in my view—it deserves to be rediscovered as a jewel of the New Wave, one of our best theatre-to-film adaptations, and a view of Benegal and his cinematographer Govind Nihalani working near full steam; personally I rate it above Nishant, which Rao spends many pages discussing. That said, Nishant is a more important Smita Patil film, and a starting point in her soon-to- be celebrated rivalry with Shabana Azmi.

I also enjoyed the close readings of specific scenes, such as the controversial bathing sequence from Rabindra Dharmaraj’s Chakra, which has been both celebrated as unflinchingly realistic and derided as ‘poverty porn’; as Rao points out, the truth probably lies somewhere in between. Speaking as a male, I should say here that I found Patil genuinely sexy in that scene, and I would have trouble with any reading that strictly compartmentalises it as ‘frank but not titillating’. Its effect can vary depending on who is looking at it and in what context. And it should be possible to make two opposing suggestions: that the director’s intentions may have been questionable, but that Patil still found a way, through the deploying of confident, assertive sexuality, to keep the balance of power tilted in her favour. As she often did in other situations, in other films.

Even while discussing such character traits as Patil’s bohemian directness and generosity of spirit, and her relationships with her sister Anita and with friends, Rao is discreet about some things. She doesn’t spend much time on Patil’s controversial relationship with the married Raj Babbar, because she never got to speak firsthand with either of them and didn’t want to rely on hearsay and speculation. There are anecdotes about other aspects of Patil’s life though, such as the one about her draping handloom saris over her jeans before going on air as a newsreader. And generously, Rao shares her stage with other Smita fans near the end of the book: there are short, heartfelt pieces by writer Deepa Deosthalee and theatre actor Vaishali Chakravarty, reminders of how thoroughly movie stars can imprint themselves on our lives.

But coming back to those ‘Dasavatars’, and to Rao’s thesis that they outshine—in quantity and quality—the heights attained by most other actresses. ‘I would personally place her above [Nargis and Meena Kumari] because she was untouched by film-industry baggage of stereotypes, expectations and practiced feminine airs and graces they were asked to adopt,’ she writes. Actually, I think this same assertion could be used to make exactly the opposite case; skilled actors who operate mostly in the idiom of commercial cinema can face serious challenges in locating truth within an often-synthetic framework.

In any case, it is hard to make such comparative assessments given that most of Patil’s best work was done by age thirty. With more time, there may have been more peaks— but it is equally likely that there may have been a rapid decline, a larger proportion of bad choices, and a consequent paring down of her reputation. The ‘what if’ question is inescapable.

And perhaps this is why the story in Rao’s book that I thought most poignant was the one about a letter Smita wrote to director Saeed Mirza after they made Albert Pinto ko Gussa Kyoon Aata Hai? together. How deeply did he believe in his political ideology and how long would he adhere to it, she asked. There was no apparent context for this question, but there was an urgency to it, a possible lament for the ephemeral nature of all things: principles, strong emotions, life itself. In another anecdote involving Amitabh Bachchan and his Coolie accident, Rao implies that Smita had a sixth sense. Could she have had a premonition of her own fate, and about the future arcs of her colleagues, many of whom were once associated purely with a cinema of integrity but who learned a few things about compromise over the years? Looking at the young woman with the soulful eyes on this book’s cover, one is tempted to say ‘yes’.

(Jai Arjun Singh is the author of The World of Hrishikesh Mukherjee and Jaane Bhi Do Yaaro: Seriously Funny Since 1983)