One man’s burden of his identity 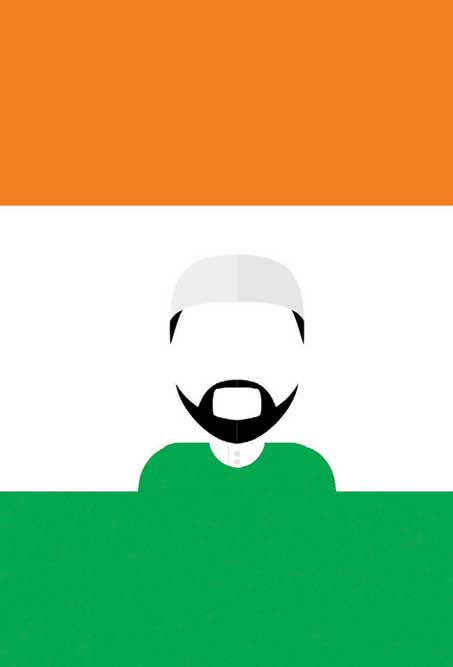 WHAT DOES IT mean to be a Muslim in India? Can a Muslim ever be a ‘normal’ human being? How can a Muslim prove that he is not a terrorist? Can ghettoisation offer security to citizens? Do politicians or religious leaders care? Neyaz Farooquee’s An Ordinary Man’s Guide to Radicalism: Growing Up Muslim in India is a poignant reflection on these and such other existential dilemmas facing India’s largest minority. Farooquee is a welcome addition to the tribe of young writers whose work is immersed in the lived realities of ordinary people. The narrative seamlessly lapses from the personal to political as he describes his childhood in a Bihar village and later-life experiences as a young man in the Muslim ghetto of Jamia Nagar in the capital.

The account of the author’s early life in the village could be the account of anyone’s life. Of course, faith is present, but it is limited to socio-cultural experiences. Concerns about children’s education, a decent livelihood, a bright future are the concerns of every Indian family. Tagore’s Jana Gana Mana, Iqbal’s Lab Pe Aati Hai Dua, Kabir’s poetry and Sanskrit verses are part of his childhood, as are Independence and Republic Day. His Dada’s advice to carry vegetarian food while travelling in respect for the sensibilities of fellow passengers is a lesson in communal harmony at a time when there is so much violence in the name of beef!

The author’s sketch of Jamia Nagar is picturesque and engaging. It brings alive the hustle-bustle so typical of Muslim neighbourhoods, with its sehris, iftaars, Friday namaaz, tea stalls, masjids, unlit restaurants, overhead wire meshes, etcetera. This Delhi locality is home to large number of citizens, and there’s peace amid all the chaos. Until the Batla House encounter of 2008.

Farooquee was a student at Jamia University whose world changed drastically after that encounter. He found he had much in common with the ‘terrorists’ gunned down. He was a resident of the ‘sensitive’ Jamia Nagar, a student preparing for his exams who lived in a messy room with the lights often kept on till midnight; he had many Muslim names in his phone book, kept Urdu andArabic books and magazines at home, and therefore had every reason to worry—for he could be a terrorist too! He was grateful that he belonged to Bihar and not Azamgarh, UP.

Tension gripped all of Jamia Nagar following the encounter, as most residents felt that it was fake. The Batla House ‘terrorists’ were young boys who had valid identity proof and were living peacefully, like anyone else. The author painstakingly documents the reason for that suspicion: a large police presence for several days, police flip-flops and U- turns, contradictions in versions of it by various agencies, media sensationalism, and, worst of all, lack of evidence of the students’ guilt. The community seemed to be under a psychological siege as their locality was presented as a terror hub.

It marred the psyche of several residents, including the author. ‘The Cache of Memories’, movingly describes how Farooquee is possessed by a fear psychosis. He attempts to ‘secure’ himself by un-joining Orkut, deleting the phone numbers of college mates from Azamgarh and their cousins, destroying all material in Urdu, and so on. For, as per TV news channels, all of this was ‘evidence’! Frankly, this chapter would be hilarious but for the gravity of the issue and for the sad delineation of how the burden of identity can hit someone.

The dilemmas faced by a young man can be endless, but the chapter ‘You Are as Patriotic as Anyone Else’ is full of hope. And it speaks volumes that hope comes from a ‘kafir’, a drunkard and Rushdie-supporter, and not a maulana.

The author offers his take on some current debates of significance. He traces the history of Jamia in detail, highlighting the role of nationalistic Muslims who refused to migrate to Pakistan and their support of Gandhiji. There is a touching account of an uncle killed by the police in the 1992-93 Bombay riots, with pithy observations of the Srikrishna Commission to go with it.

This book is the outcome of Farooquee’s ‘modified-by-encounter dream’ which led him to become a journalist and writer. It makes for compelling reading and raises serious issues facing the world’s largest democracy.