Bill Returns to the Oval Office 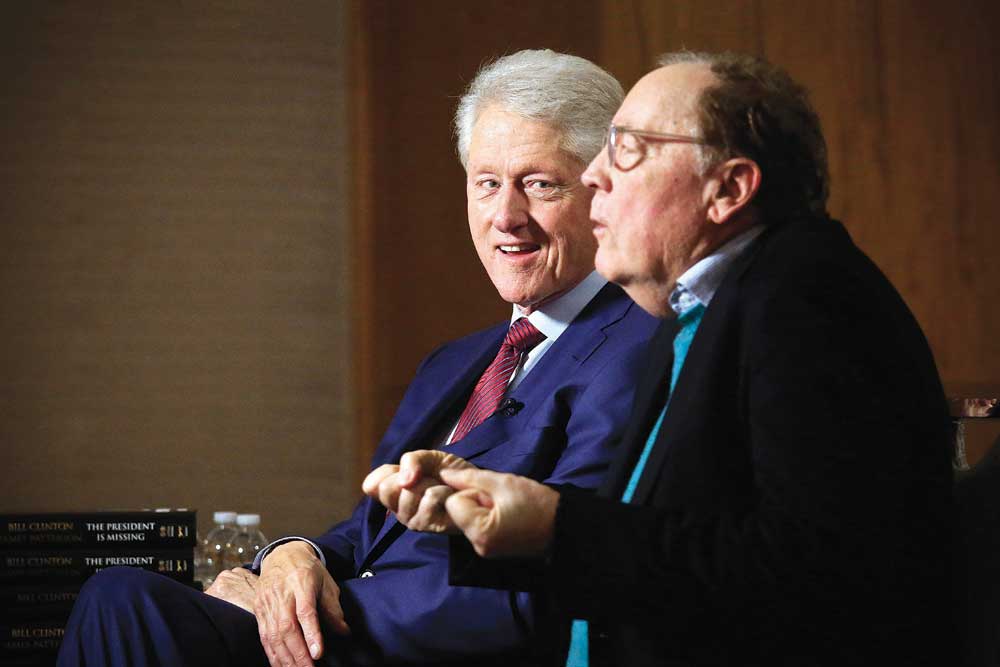 THE GOOD NEWS for Bill Clinton is that he doesn’t have to exert himself to outdo his presidential predecessors. Way before he became US president, Abe Lincoln wrote a murder mystery, The Trailor Murder Mystery, and got it published in his local paper, The Quincy Whig, in 1846. Abe’s dream was to become an Edgar Allen Poe, but alas, his writing style did not rise to those levels, preferring to hew close to his profession. The style is reminiscent of a judge summing up a case for the jury.

Then we come to poor Jimmy Carter, who wrote The Hornet’s Nest (2001), a saga set in the American South. A reviewer panned it in the Guardian as ‘an unreadable book, one which leaves other unreadables (like The Da Vinci Code) floundering in his lumpen wake.’

Bill Clinton has done two smart things while creating The President Is Missing. First, he has found James Patterson, the author of some 160 novels, as his co-author. Second, the main character of the book is the President of the United States of America, something Bill knows a little about.

So how does the book touted as ‘the publishing event of 2018’ rate as a thriller? Well, it begins with a bang, and will thrill politicos. It is a Senate hearing where the main character, the President, obviously, is being grilled by his political rivals, with an impeachment looming ahead. Or so we think until we realise that (especially) the most powerful person in the world has to rehearse ad nauseam in this age of visual media. Up front, we know that President Jon Duncan is worried about a threat to his country, a McGuffin of humungous dimensions. A cyberterrorist, Suliman Cindoruk, may be involved, but we don’t know on whose side he is. Impeachment is on the cards because leaks suggest that the President had spoken to Suliman, who is Turkish but not Muslim (no Islamophobia will be tolerated by Bill er… Duncan). A Carlos the Jackal type assassin, Bach (who, of course, listens to Bach) has been hired but we don’t know who the target is. We are given some clues: the President and his key aides are worried about something they have codenamed ‘Dark Ages’, and the lights keep flickering periodically in the White House. We also know that President Duncan will do the right thing regardless of how much it costs him. His past—a Prisoner ofWar in Desert Storm who was tortured but never gave up any secrets, a loyal friend, a loving father, a grieving and recent widower with one daughter, a medical condition (immune thrombocytopenia, by which blood won’t clot)—is the stuff that makes for an All American Hero.

Duncan has a simple view of the world—friend or enemy, good or bad, just or unjust—but is set adrift in a universe of brilliant tacticians who blur these distinctions. Foremost among them are the Beltway snakes—political rivals who want to destroy him ‘personally and politically’ and who include the Speaker of the House and his own Vice President, who was his rival. The icing on the cake is that there is a traitor in the inner circle of his administration. How do we know this? Because a strange woman contacts him, says she has a partner, and both want to make a deal, and for good measure uses the codeword ‘Dark Ages’, known only to six people in his administration. One of them is the traitor who has revealed it to this computer coder-woman. President Duncan slips into a disguise—well, grows a beard and thickens his eyebrows (no Jason Bourne this)—and hurries off to meet the woman’s partner at a ballgame. No secret service detail, just him as an ordinary Jon meeting a cyberterrorist- hacker. Hence, the title.

I think the title is misleading because we are parked, for most part, in the President’s head. The story is mainly narrated in first person and in the present: ‘I turn to my left as the top of the squad car takes two bullets, thunk- thunk, and drape my body over Augie’s.’ Thunk thunk indeed. We see the actions he is taking and (not so slowly) understand the reasons for them. With assassins on the loose, bullets are bound to fly about. We also learn that the coder has created a virus capable of catapulting the US into the dark ages. From then on, it is a race against time to find the solution before the virus finds all the files that make life tick in the US. Much of the conversation mid-way onwards reminded me of Die Hard 4, where Bruce Willis teams up with a hacker to stop a cyberterrorist.

It is fast-paced and riveting in most parts. We get a clear glimpse of the impossible choices a President of the US faces on a daily if not an hourly basis

Patterson’s skill as a storyteller (but not as a writer) is evident. His tips on how to write an unputdownable story (which he has elaborated in an interview elsewhere) are all followed in this book. Don’t bother with descriptions, just give the reader enough to follow on that page and keep her interested enough to turn the page. Make it an experience. Keep chapters short. It doesn’t have to be realistic. Outline as if your book depends on it. Know who you are writing for and what they want.

“I think I’m an okay writer, but a very good storyteller,” Patterson had told the interviewer, and that is spot on. The book periodically inserts a third-person point of view (that of the pregnant assassin), but its beat is staccato, with very little heart driving it. In the President’s point of view, however, the telling of the tale is all heart. But that too often tips into melodrama.

It is fast-paced and riveting in most parts. We get a clear glimpse of the impossible choices a president of the US faces on a daily if not an hourly basis. Do you capture a terrorist and avert future deaths if in doing so you will have to kill seven children? Do you do the right thing even if it is going to maim you politically? What can you do in a situation where even your experts can’t come up with an answer? I am not giving away anything here because these are the questions that drive the book—that make you, the reader, turn the page. Though the answers are quite pedestrian and make the reading experience quite shallow, the fact that Bill Clinton is the co-author lends the central character’s internal monologues credibility.

The dialogue, however, is another matter.

‘Why do I feel like we are chasing our own goddam tails here, people,’ says the President.

‘Because it always feels that way sir,’ is the response. ‘It is what we do. We play defense against invisible opponents. We try to smoke them out.’

Surely people in such powerful positions don’t speak like this.

Now to the question at the top of everyone’s list. How have the co-authors shared the writing of this book? As anybody knows, writing is a solitary business. Co-writing is a hellish one, unless your co-writer is a dab hand at it. What part did Clinton write? Did he give Patterson the first-hand account of what it feels to be a president, or did he also write sections of the book? For an answer, one could check to what extent The President Is Missing resonates with the theme of Patterson’s other books. Where has he made allowances for Clinton?

The only slight problem was that I had not read a single book by Patterson. I decided to read The Black Book (2017), which Patterson considers to be his best novel in 20 years, but had to stop after the first two pages. Too much melodrama and angst. Happily for us, the melodrama quotient is dialled down in The President Is Missing. Clinton’s contribution perhaps?

When a former president co-writes a thriller, the reader is tempted to attribute more meaning and magnify the significance of some parts of the story, such as about the nature of his country’s friendships. Take the US-Israel one, for instance. In this book, the Israeli Prime Minister (a Golda Meir-ish woman) calls the President ‘Jonny’, which says it all. Clinton also gets to offer a political oration about the kind of world he dreams of in chapter 128.

After finishing this book, you will want to hang on to your old (non-computerised) car, pens, paper, and of course, withdraw your money from the bank, change it into gold, and store it under your bed. It is terrifying to realise that the easier our life becomes because of technology, the more vulnerable we become.

Overall, the book ticks the boxes. It is a quick and easy read, and entertaining for the most part. But the ‘most gripping and surprising thriller in years’, it is not.