Bharati Mukherjee: A Sense of Belonging

Bharati Mukherjee is at home in America—a place without hyphens 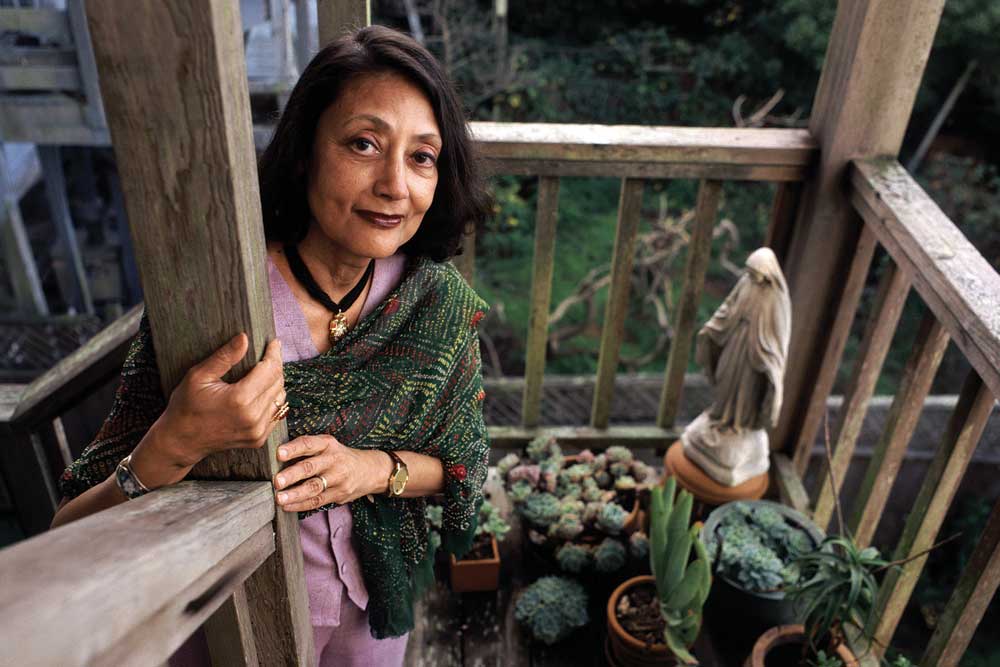 WHEN I FIRST began corresponding with novelist Bharati Mukherjee in New York, it was spring of 2015 and a time of dreaming. ‘I am so honored by your interest in my work,’ Mukherjee had written graciously in her letter; this became a precursor to a few impossible plans. Author of acclaimed novels such as The Tiger’s Daughter (1971), Wife (1975), Jasmine (1989), Desirable Daughters (2002) and Miss New India (2011), Mukherjee had previously taught at McGill University, Skidmore College and CUNY before retiring from the University of California, Berkeley, in 2013, and was now spending her time in Manhattan, where she also taught a course in Columbia’s MFA program. Her husband Clark Blaise had just finished his book on inherited diseases, especially myotonic muscular dystrophy, a disease that was ravaging their older son who was then wheelchair-bound. The book was thus more than just a writerly exercise; it was an act of faith. Their son was scheduled to arrive in New York from Song-do, Korea, later in the spring, and the “Bengali mother in her”—her own words—wistfully hoped that he could stay longer. I asked her if we could do a long-form interview for Kitaab, a Singapore-based literary journal for Asian writing on whose board I serve. She agreed without a fuss, but, ever the professional, asked about the deadline. “Please don’t worry about things like deadlines,” I replied, aware of the family’s medical situation. And in those imminent spaces between life and longing, disease and death, we spoke of our mutual passions as women: words, work, and travel.

Words. If there ever was a writer who could wield a word like a song, or a sword, it was she. But Mukherjee’s narratives held more than just aesthetic pleasure; intertwining the personal with the political, they offered still-relevant feminist critiques of women’s roles in society, and the intersections of gender with race and space. Wife, for instance, moved readers away from received traditions of syrupy sweet romances, into the darker sides of forced marriage and motherhood, and the normalisation of abuse. Immigration, interracial love, and questions of assimilation were recurrent themes in her life and work, as in the case of the Indian woman Tara in The Tiger’s Daughter who marries an American man, as well as in Jasmine, a story of the struggles of an Indian woman trying to find some semblance of home and belonging in the United States.

Indeed, Mukherjee’s fiction—and its local and global reception—could be seen as continuing certain trends in literary fiction that had germinated in the 1950s. One thinks immediately of Kamala Markandaya’s novel, Nectar in a Sieve (1955), which had explored gender relations, class struggles and the East-West cultural encounter to tremendous critical acclaim. While the debates on creative versus imitative, English versus vernacular writing, were not new, women writers like Markandaya, with their impeccable use of language, polished literary styles, and location in the West garnered a larger global audience, even as their hybrid—in both matter and method—styles of writing served as fertile ground for literary critiques of ‘Indianness’ and authenticity. It may be argued that women writers like Markandaya and Mukherjee laid the foundations that later diaspora writers then built upon, to explore the fractured subjectivities and culture clash faced by women with hyphenated identities. Chitra Banerjee Divakaruni’s Arranged Marriage (1995), Meena Alexander’s Manhattan Music (1997) and Jhumpa Lahiri’s Pulitzer Prize-winning Interpreter of Maladies (1999) and The Namesake (2003) all come to mind here, with diverse characters finding themselves at odds with their new surroundings—and with their children who, growing up to identify as modern Americans, also experience the tugs and pulls of an ancient ‘Indian-ness.’ Indeed, this dichotomy between Fanon’s ‘black skins’ and ‘white masks’ has often haunted what might loosely be termed the literatures of the diaspora, with expatriates caught between adoptive homes and ancient homelands.

But herein lay a crucial difference. Not for Mukherjee the Americans of hyphenated identities struggling to build a viable home among the diaspora, nor for her the shifting kaleidoscopes of past ritual and present monotony, searching for home and belonging within the recesses of one’s mind, in solitude and soliloquy, as one might associate with writers like Anita Desai. No, her home was this; it was America, a land of hope and without hyphens. In fact, she took a fairly controversial stand during her lifetime, challenging convention that would otherwise have classified her as an Indian-American writer. Instead, Bharati—her name ironically derived from Bharat, India—drew a voluble distinction between expatriate and immigrant writing, emphasising the need to let go entirely of the old and assimilate into the new, and breaking free of her hyphenated identity to assert herself as an American writer. While this stance earned her obvious criticism from multiple quarters, it did situate the stereotype- defying ‘Third World’ woman squarely within the mainstream American literary and cultural scene.

Was Mukherjee’s stance on absolute assimilation with a frozen ‘Americanness’ a necessity of her times, a position that our generation, situated as we are within inherited and inhabited worlds of postcolonial privilege, of many cities, multiple languages, of living and travelling through borderlands, cannot adequately understand? And if so, why did the woman who had called for shedding any lingering Indianness to assert herself only as American describe herself to me as a Bengali mother so many years later? What would be her response to the postcolonial feminist moment that seeks to expose both the East and the West as problematic ‘homes’, instead arguing for hybridity, creativity, homelessness? What did she think of more contemporary writing such as Kiran Desai’s novel Inheritance of Loss (2006), which subverts easy binaries of traditional India versus the modern West by tracing the loss of home and identity in the postcolonial present, whether lived out through the experience of illegal immigrants in America, or subalterns of different hues, or postcolonial elites in India? Or even Aravind Adiga’s White Tiger (2008) that also questions the East-West binary, in the context of the rapid Americanisation of privileged pockets in India, which co- exist alongside deep-rooted structures of corruption and poverty, America running tantalisingly through the plot as both need and nemesis?

We will never know. But my own sense is that, her stated political position notwithstanding, she did straddle multiple worlds with comparative ease. And to the extent that Adiga’s novel ultimately envisions India’s liberalised future as one of freedom, with Balraam Halwai breaking ancient caste boundaries to emerge an entrepreneurial tiger, Mukherjee’s most recent novel Miss New India (2011) offered us a glance into the gendered aspect of globalisation and the role of women therein, a question Adiga leaves mostly unanswered. Miss New India, the story of a small-town girl’s move to a big Indian city of call centres and multiplexes, is an ‘amoral fairy tale’ that explores, in Kishwar Desai’s words, ‘India’s post-liberalisation generation, star-struck by foreign brands, stumbling towards the Holy Grail of mega bucks and quick success, deserting the debris of ‘values’ and ‘ethics’.’ But India has been changing so rapidly in the past few decades that the yawning divide Mukherjee imagines between a small- town girl and those in larger cities is too stereotypical, Desai argues; Mukherjee’s Miss New India is already ‘Miss Old India’, with the real divide now being the rural-urban one. These critiques notwithstanding, Mukherjee’s candid treatment of alternative sexualities, money, multiplexes, date rape, and the pitfalls and possibilities of individualism, does contribute to the fictions of liberalising India, and how the anxieties and inequalities of globalisation, and the de-territorialised ensembles it prompts, are invoked and resolved on the margins of gendered bodies.

Was Mukherjee’s stance on assimilation with an ‘Americanness’ a necessity of her times, a position that our generation cannot understand?

At the time of my conversation with Mukherjee, I was teaching at a liberal arts college in Ohio and preparing to join the University of Michigan at Ann Arbor. She was delighted to hear of my appreciation for Miss New India, and expressed a desire for scholars to take a look at the trilogy of which that novel was the first stand-alone novel. In response, I said I would love to read her novels through an interdisciplinary lens in the summer, after I had moved and settled in Ann Arbor, and would also send her the questions for the formal interview. Interestingly, she also drew my attention to her novel The Holder of the World, a transnational retelling of Nathaniel Hawthorne’s 1850 novel The Scarlet Letter. When she told me that her novel was the result of 11 years of research, I realised yet again how, in her seamless and gracious universe, fiction and scholarship could merge without rancour, as could cultures, countries, continents.

The interview never happened. From Ohio to Michigan, between one snowstorm and another, and the myriad responsibilities of teaching and research, I was not able to send her the million questions whose answers I wanted to know for myself and the world. I did write to say I was sorry about the pain their family was going through, sending them family love and prayers; to her son, I sent many years from my own life, and to her—from the Bengali in me—pronaam . Mukherjee died on January 28th, 2017. In looking through our correspondence, I cannot help but think back to her assertion that she was American. One reflects on the ways in which immigrant writers have poignantly sketched some shapes of home in the heart of America and elsewhere—a real ceiling here, an imagined wall there, teardrops and hugs, going away, coming back, a place sometimes of loss, but always of love. Yes, homes function as potential sites of confirmation as well as contradiction; moving along multiple axes, they do not just provide protection but have historically been organised around select inclusions and exclusions to keep the other out. As intense political debates ensue worldwide over definitions of who belongs and where, it is perhaps time to bid Bharati Mukherjee— woman, writer, traveller—goodbye.

Dr Debotri Dhar
Dr Debotri Dhar teaches Women’s Studies at the University of Michigan, Ann Arbor. Her most recent novel was The Courtesans of Karim Street