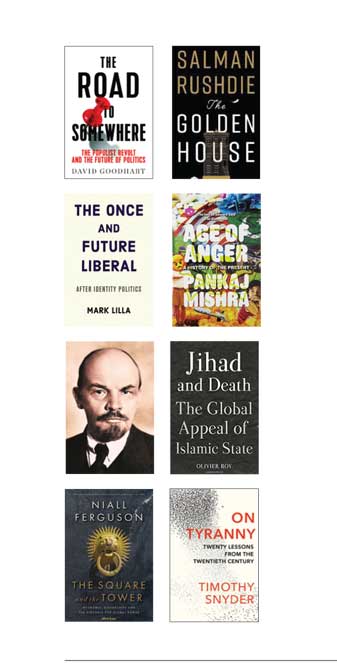 The idea of politics played out delightfully across the pages in 2017. Politics as narrative storytelling has been thriving as a literary genre for a while, and to add dramatic tension and ideological diversity to the story, the arena is getting crowded with new subversives and usurpers. As 2016 came to a close, those refreshing arguments lingered, whether it was against democracy (by Jason Brennan) or in praise of forgetting (by David Rief) or in favour of restoring classical rhetoric in political discourse (by Mark Thompson). In 2017, the combined effect of Trump and Brexit continued to influence the writing on the power of populism. In The Road to Somewhere: The Populist Revolt and the Future of Politics (Hurst), David Goodhart argues that the most defining crisis in democracy today is born out of the resentment of the ‘Somewheres’—the rooted, communitarian, economically left-out class. They are pitted against the ‘Anywheres’, the cosmopolitan globalists. Is the loser in this big, bad, boastful world the liberal? Mark Lilla, one of the finest political essayists of our time, makes a compelling argument about the redundancy of liberals in his book-length essay, The Once and Future Liberal: After Identity Politics (HarperCollins). Lilla, a disillusioned liberal himself, writes that liberals are losing because ‘they have retreated into caves they have carved for themselves in the side of what once was a great mountain’. One man who contributed the most to this whirl of ideas gets the treatment he deserves in a novel, though. In Salman Rushdie’s The Golden House (Jonathan Cape), ‘it had been more than a year since the Joker’s conquest of America and we were all still in shock and going through the stages of grief but now we needed to come together and set love and beauty and solidarity and friendship against the monstrous forces that faced us. Humanity was the only answer to the cartoon.’ In a richly annotated history of ideas, Age of Anger: A History of the Present (Juggernaut), Pankaj Mishra says it’s the illiberal instincts of the Atlantic West that have finally repudiated the cult of the enlightened individual. And it was the year that marked the centenary of a revolution that ended up as one of history’s biggest dehumanising projects. Victor Sebestyen’s Lenin the Dictator: An Intimate Portrait (Weidenfeld & Nicolson) is the kind of biography that reads like a thriller; it’s the magical realism of evil. And no argument about evil is complete without the so-called Islamic State, currently a shrunken fantasy. Olivier Roy, one of the foremost writers on political Islam, provokes the hawks with a clever statement in Jihad and Death: The Global Appeal of Islamic State (Hurst). The problem, according to Roy, is not the ‘radicalisation of Islam but the Islamisation of radicalism’. We are not sure. What’s certain is the banality of tyranny. Timothy Snyder’s little book, On Tyranny: Twenty Lessons from the Twentieth Century (Tim Duggan Books) is an essential manual for staying sane—and human. It’s as if the worst from history continues to shatter the new imperium created by the digital, as profiled by the historian Niall Ferguson in The Square and the Tower: Networks, Hierarchies and the Struggle for Global Power (Allen Lane).