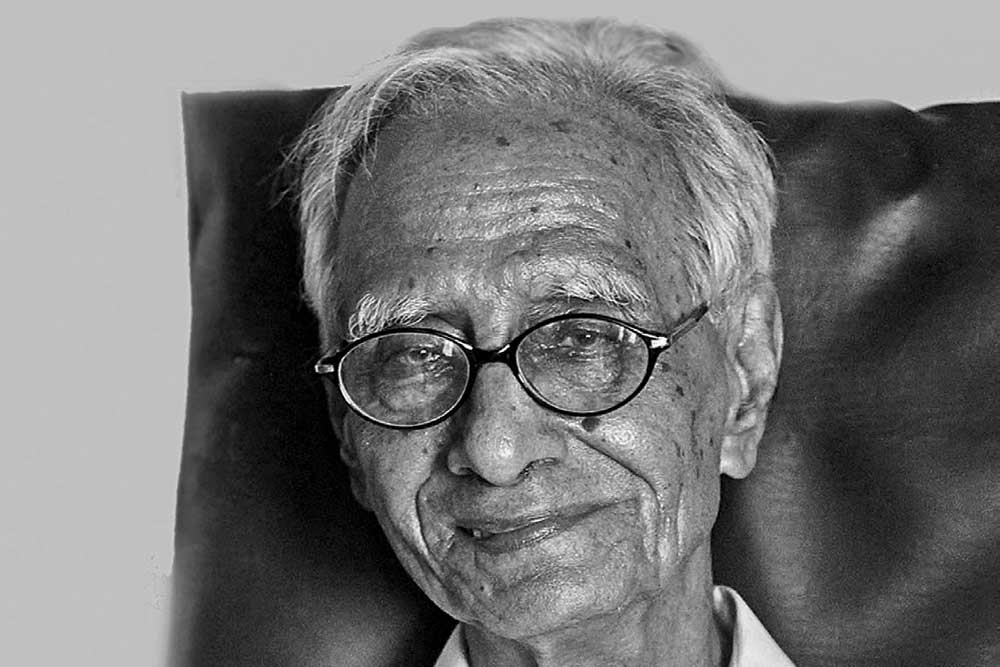 IT WAS SOMETIME in the 1970s that I first learnt that Ashokamitran was a modern Tamil writer known and respected in the West. An article on him in Span magazine suggested that here was an Indian novelist and short story writer whose appeal was universal even if his characters were as Indian as could be. It confirmed my youthful impression of an author who spoke to people like me, in their twenties or thirties, in a simple, uncluttered style, but revealing a deep empathy for Everyman rarely seen in the writing of the time. I had read a few of his short stories and been struck by the economy and appropriateness of his words and his tendency to surprise the reader with little unexpected twists, but without artifice of any kind. For this, he was sometimes compared with Pudumaipithan, regarded by many as the greatest 20th century writer of short stories in Tamil. Ashokamitran was barely 17 when Pudumaipithan died (in 1948, at the age of 42), and a voracious reader by then, but largely of English literature, with Charles Dickens a favourite. Though Ashokamitran analysed Pudmaipithan’s work dispassionately (Paarvaigal, a collection of essays in Tamil on authors, 1999), but with great admiration, he does not speak of its direct impact on his writing.

After that relatively early introduction to Ashokamitran’s writing, for a long time I did not read Tamil fiction that was not published by popular magazines. My reading of his writing was limited to the rare appearances he made or must have made in Kalki or Ananda Vikatan. (Had our roles been reversed, Ashokamitran would have been sure about when and where he had read me, however long ago, as we can make out from his remarkably accurate recall of events past). My involuntary abstinence from his work was during my sojourn in Secunderabad; ironically, I was to learn later that New Bhoiguda, where I lived, was where he had stayed for a while as a child with his parents.

Ashokamitran was a young man when he moved to Madras from Secunderabad, where he grew up. One of his most famous novels, beautifully translated into English by Gomathi Narayanan as The Eighteenth Parallel, is believed to be autobiographical. The protagonist Chandrasekharan is born into a lower middle-class home, lives in tiny, very basic dwellings until his father is allotted railway quarters after many years of toil. He is crazy about cricket, books and cinema, and is struggling with his burgeoning interest in girls. From Chandrasekharan’s first-person narrative, we learn what an acute observer his creator was of both people and happenings around him. It is hard not to conclude that Chandrasekharan is Ashokamitran.

The Eighteenth Parallel was one of Ashokamitran’s finest novels, with its backdrop of the Nizam’s Hyderabad and his varied subjects Hindu, Muslim, Anglo-Indians and others and the resultant friendships and enmities, the trauma before the accession to the Indian State with the Razakars cutting loose, and a wretchedly tragic denouement. Chandrasekharan has friends in all different communities, and the first women to give him a semblance of love are Anglo-Indians and Muslims; but when Hindu-Muslim violence breaks out, he accidentally takes refuge from a Muslim mob in a Muslim home in the poorest quarter of Secunderabad, where a terrified girl strips and offers herself to him to save her family, mistaking him for a rampaging Hindu mobster. The novel ends with Chandrasekharan fleeing the place in abject misery, ashamed and blaming himself.

Perhaps the one writer who influenced Ashokamitran was Somerset Maugham

Perhaps the one writer who influenced Ashokamitran substantially was Somerset Maugham. Like Maugham, Ashokamitran was a master of understatement and brevity. His wry, subtle (as opposed to loud) humour distinguishes him from most of his contemporaries despite the strong undercurrent of sorrow that characterises most of his writing. He deals in real flesh-and-blood characters of his native Indian soil, most of them middle-class or poor, yet they could be from any part of the world. He sometimes reserves his deepest sympathy and understanding for the least likable of his characters. His many years as an employee of SS Vasan’s Gemini Studios brought him into contact with some of the most interesting, even hilarious characters and situations, and he put them all into his essays and books. He believed that non-fiction should read like fiction, and his fiction almost always gave the impression of being true stories. My Years With Boss, a slim volume of his remarkable tenure at Gemini, is full of outrageously funny stories, while his novel Manasarovar , about a rare friendship between a flamboyant north Indian superstar and a ‘Madrasi’ scriptwriter, one of my favourites, reads like a true story or many true stories. There is never any lurid sex in his stories, but he does not shy away from dealing with the problems of women, including those of sex workers and ambitious starlets victimised by the film industry. The violence, not always only physical, sometimes self-inflicted, often hits you like a thunderclap. Frequently, as in his short story collection Today, tragedy is irreversible.

I had the unexpected privilege of getting to know Ashokamitran personally when I translated his novel Karaintha Nizhalgal, a moving story about the grim realities of the Tamil film world of the 1960s and 70s. I was heading the English division of New Horizon Media, a publishing startup, whose ambitious mission was to publish English translations of Tamil literary works and give them national—even international— exposure, and their authors a fair deal. We called it Star Crossed in English, preferring not to translate the Tamil title, which meant ‘shadows that had dissolved’. Not only did Ashokamitran approve my translation, he actively participated in the process. That is when I realised what a good translator he could be if he set his mind to do it himself. In fact, he would have been just as good a writer in English as he was in Tamil, so elegant and precise was his prose in both languages. The thought occurred to me that like his friend and prolific author Indira Parthasarathy, he too perhaps thought in English.

Star Crossed was nominated for the Crossword annual award for 2006, our first year in publishing. It was one of two titles from our stable, with Penguin and Harper-Collins providing the four other shortlisted translation titles. Crossword did us proud; Ashokamitran, I, the other author Era Murukan, and his translator Janaki Venkatraman, were all flown to Mumbai for the awards function. In a grand event, Amitav Ghosh gave away the award accompanied by a music concert by Shubha Mudgal.

From the moment we boarded the plane, Ashokamitran was in a state of excitement I had thought him incapable of. He was convinced that ours would win the prize, and told me so repeatedly. He was more interested in my prospects than his, such was his generosity of feeling towards friends, something he tended to carefully hide. As it turned out, the prize was shared by a Bengali novel and a Malayalam novel, and Ashokamitran was devastated. So upset was he that he swore not to attend such ceremonies in future. He never did. “Why didn’t you say that Star Crossed was shortlisted for the Crossword Award?” he chided me when at a recent launch of yet another translation of his novel, by N Kalyan Raman, his most prolific and trusted translator, I was invited by the evening’s anchor to recall my experience of translating him.

Another occasion he had been at his childlike best was at the function to launch Today. He brought his wife and daughter to the event and was visibly happy, as he went around introducing them to the other guests. He was so overcome by his joy at the quality of the translation and the production values, that he twice introduced his family to me. (He was soon to be disappointed when on careful reading later, he found a few unfortunate typos).

My first meeting with him had been at the launch of a Tamil book of verses. Releasing the book, he said, “I suppose some people have the urge to write poetry, but I don’t know if it’s always a good idea to publish their poems,” or words to the effect. I was shocked and upset, and thought Ashokamitran must be a nasty person. I later read many of his generous tributes to several authors past and present. He was a large hearted man, but also an irrepressible truth-teller.

He recently told an interviewer, “I haven’t done anything big. There is nothing much to be proud of. I have thoroughly spent whiling away my time writing (laughs). And, some have read my works.” Anyone who knew Ashokamitran will know that his was true humility.