Aminatta Forna and the impossibility of happiness 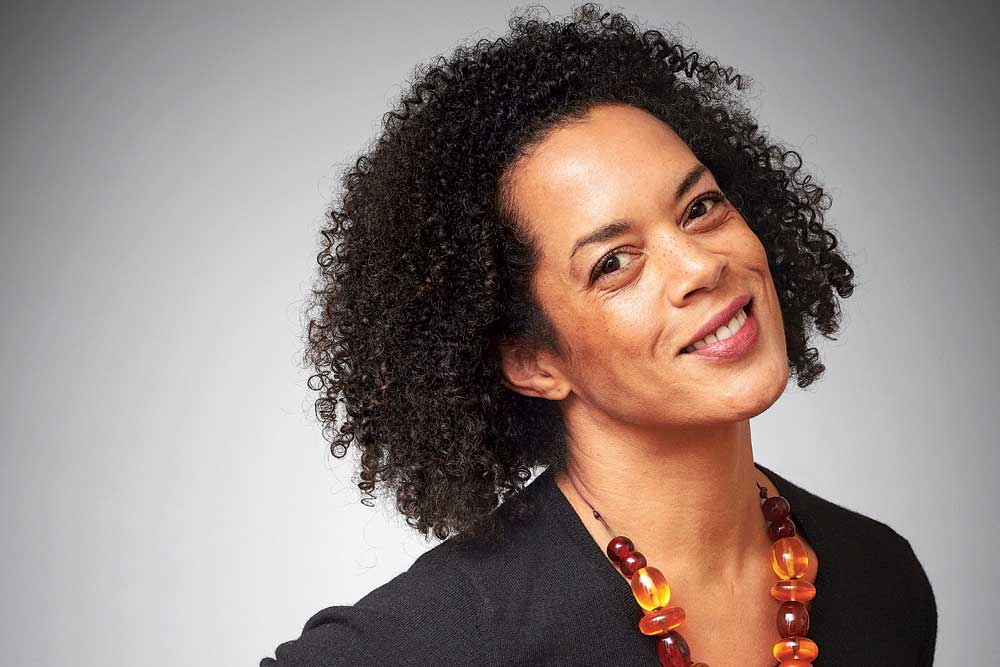 Aminatta Forna grew up in Sierra Leone, Scotland, Iran, Thailand and Zambia. She is the author of four novels and a memoir. An ardent canid lover, she has also written a children’s book called The Angel of Mexico City, which features an angel-in-training, a homeless boy, and a dog. For most of her adult life she has lived in London, but for the last three years she has held the position of Lannan Visiting Chair of Poetics at Georgetown University in the US. Her novels have explored the nature of violence and trauma, particularly the effects of civil war, in countries like Sierra Leone and Bosnia. When people use the phrase ‘naturally good’, she bristles. “I say no, you are untested, you have not had the opportunity for violence, but when you’re given the opportunity for violence you may find something different emerges.” She studied law at University College in London and later worked as a BBC journalist. Her love for literature can be traced back to a tutor she had as a child, Miss Bird, who thrust poetry upon her. She is the recipient of a Windham Campbell Award from Yale University and the Commonwealth Writer’s Prize for Best Book in 2011 for The Memory of Love. Forna is involved with Rogbonko, a developmental and educational project in central Sierra Leone, which aims to revitalise a community cut off between rebel lines during the civil wars that killed more than 50,000 people in the 90s. The first time she saw ice was Disney on Ice at Wembley Stadium in 1970. At the end of the show, the performers took children from the audience and carried them on to the ice. Forna was picked by Baloo from Jungle Book. While the audience clapped and cheered, Forna cried and begged to be taken back. Baloo dug his fingers into her and said, “Shut up, you little shit!”

AMINATTA FORNA TELLS me about a yearly ritual she would watch enacted from the window of her study in London. A vixen raising her litter in the garden. “I found it completely joyful to find fox cubs in my garden—that they’d move children’s toys about, or pick up little wellington boots, or that you may find a golf ball buried in a flower pot.” Most of her neighbours were amused by them too, but some wanted to bring in people to shoot the foxes. “I don’t understand. In world terms, it’s so minor. What was the worst they’d ever do? There was a bit of fox shit, that’s it.”

Forna arrived in London at 18 for university and stayed. For 30 years, the city has been home. Seeing a fox in London, she says, is the corollary and opposite of seeing a plastic bag in the countryside. “The plastic bag is that awful fingerprint of man. If you see a fox in the city, that’s wildness fighting back.” In her most recent novel, Happiness, a woman called Jean Turane fashions gardens out of London terraces and monitors a study of urban foxes. She began the book with ideas of wilderness and control, but also, with resilience. She says it’s the culmination of a 15-year project that began with The Devil that Danced on the Water (2010), an investigation into her childhood and the execution of her father, a prominent Sierra Leonean activist. This led to wider concerns about how violence affects populations after a civil conflict.

“In a civil conflict, you can’t get away from the people who did it to you, so it’s both similar and different to an international conflict. In the West we think of war traumas affecting combatants and I was interested in the civilian experience… the further I got away from Sierra Leone’s conflict, the more I saw that the country had actually repaired itself in a remarkable way.”

Talking to Forna, you quickly encounter her two ‘We’s. The ‘African We’ and the ‘Western We’. For three years, she has been living in the US teaching at Georgetown University, which has added an American dimension to the Western We. These ‘We’s are the basis for her double perspective. She quotes a Chinese proverb: A cow can tell you what it feels like to stand in a field and eat grass, but it cannot tell you what that cow looks like standing in a field and eating grass. “I think I can actually do both, which comes from not being entirely ‘of’.”

We meet in a restaurant in New York’s Greenwich Village so trendy it refuses to signal its existence with either a name-board or street number. Forna, who has arrived before me, dressed in a fabulous shaggy coat, ushers me in. She is a commanding presence. Friends have described her as Amazonian, high-octane, fearless. She is all of these. Her accent however does not waver in ‘we-land.’ It is firmly British.

London is the central setting for Happiness, and Forna says it was useful to have geographical distance from it while writing. There’s a line in the book which describes England as ‘a nation of Ms Havishams.’ It means, she says, that Britain has been going through a long existential crisis since the end of empire. “The Irish, Scots, and Welsh see it because they’ve been part of empire, but the English don’t see themselves because they hold that framework in their mind and there’s this endless melancholy. You really notice it when you leave, how constantly historically backward looking Britain is.” Americans, by contrast, don’t see because they are the current empire. “In America, we think if we don’t have the answer, then it doesn’t exist.”

Happiness for Forna is a form of glee, a joy which is unattainable in adult life once you know anything about the world. “One of my Pakistani students said, ‘I can’t believe I came to a country and your goal is happiness!’” In most countries (with the exception of Bhutan), happiness is not an unalienable right; rather, it’s an unexpected bounty. There’s also the question of dissonance between the goal of happiness and the Prozac nation reality that is America. “I find my American audiences surprised that we question they are happy,” Forna says, “That we who come from less financially successful countries question their happiness.”

“The further I got away from Sierra Leone’s conflict, the more I saw that the country had repaired itself in a remarkable way”

Forna exhibits a certain glee while talking about these dissonances. Her approach to being a provocateur is nuanced. From her particular insider-outsider position, she has been consistently trying to reverse the gaze. In her previous book, The Memory of Love, she took a Western psychiatrist to Sierra Leone, where he doesn’t get to be the hero. In Happiness, she bring Attila Ansare, a Ghanian psychiatrist, to London. Human rights lawyers and psychiatrists are frequent protagonists in Forna’s worlds. When I ask whether the particular tragedy of her father being killed when she was 11 drove her to becoming a writer, she shakes her head emphatically.

“I don’t believe writing is therapeutic. I really don’t. Writing can drive you mad. It could make it worse. You have to be very careful about continually re-entering that space, so I think you actually have to be very sorted about your emotions before you write.” Forna questions whether she suffered trauma as a result of her father’s killing. “Did I suffer? Yes. I absolutely suffered. Was I traumatised? No. Did it stop me from being a fully functioning human being? No.” She believes she writes because she is her father’s daughter, not because of what happened to him. They were raised with a strong sense of duty, which she thinks she would have carried into whatever profession she pursued.

“Now that I’m 50 and my friends are losing their parents, I say to them, ‘You will grieve for a long time. You will actually grieve forever. The difference between now and ten years is that you will have got used to the feeling.’ And some people are shocked by that because they want the grieving process to be over in a year, and if it’s not over, then it has become pathological and requiring of treatment. My experience of grieving is that it is simply endless.”

It’s strange to hear Forna talk about loss because she embodies a boundaryless zest for life that is rare. Her characters Jean and Attila are far more tempered. They come together in London after having suffered separate tragedies and carry their grief around like a ‘quiet companion’. “The idea that we can never be the person we were before the tragedy or loss doesn’t mean we can’t find pleasure or joy or love,” Forna says. It’s the fear of wanting to control and secure the parameters of safety in our lives which is the thrust of the book. The reason why the arrival of foxes and immigrants in cities are viewed with such distrust is because they are an imposition on our safety bubbles. Forna suggests that the idea of the bubble itself is a mirage.

One of the guiding forces in writing Happiness was the French psychologist and psychoanalyst Boris Cyrulnik, author of Resilience, who witnessed the deportation of his parents to a concentration camp, and who later joined the resistance and worked with survivors of death camps. He began to notice that these survivors were not all as unhappy and destroyed as they were presumed to be. “It happens less now with professionals,” Forna says, “but it’s still societal—this idea that if you’ve been through some sort of potentially traumatising experience, you are damaged and therefore lesser.” In fact, Cyrulnik indicates that damage can lead to growth. This, he calls, ‘the paradox’.

There’s a point in the book where Attila is giving the keynote at a psychiatry conference, and he says, ‘We, professionals and lay folk alike, have used the suffering of others to reinforce the myth of ourselves: their unhappiness becomes the bolster to our happiness. We are terrified of their pain, simultaneously attracted to it and repelled by it.…’ Forna believes that these psychological fortresses are self-defeating, that the kind of prelapsarian happiness that people are reaching for is an impossibility.

When I ask Forna what she makes of writer labels—woman, person of colour, Sierra Leonean, hybrid, immigrant—she says, “I think there’s a much greater awareness among critics and reviewers because we’ve fought back, and I think they’re getting more sensitive about trying to categorise us in that way.” Does it upset her that Karl Ove Knausgård writes about the domestic and everyone says it is universal while if a woman did the same it would be called sentimental? “We should stop being upset about the Knausgårds. We now hold the mantle and I think that if they’re not over, they’re almost out. The winds are changing. I wish I were a 30-year-old writer now, rather than a 50-year old, because the difference I’ve seen since I first got published is tremendous…We are it. They are not it.” She waves her hand dramatically like a wave slumbering off into the distance. “They’re not it any longer.”