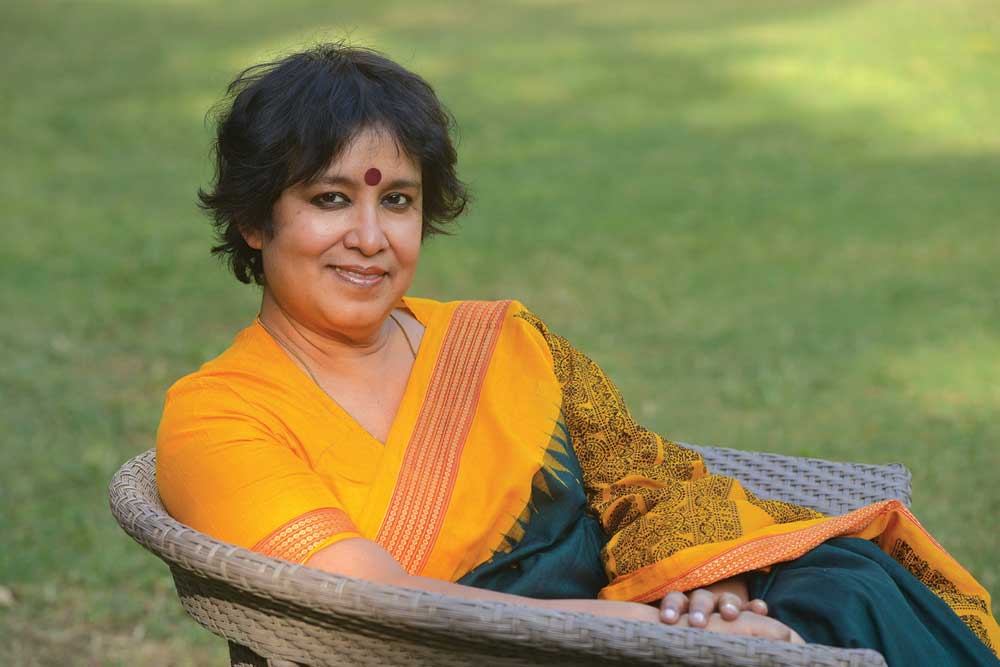 IF YOU’VE FOLLOWED Taslima Nasrin’s life in recent years, Exile will hold few surprises for you. Somewhat reflective, but mostly simple and direct in its narration, it tells you the story of her backing and forthing in different countries of the world in search of a home.

India looms large, Bangladesh, her beloved native land, is mentioned but almost cursorily, for the writer knows that that is a lost battle, that ownership and belonging of that particular land are a thing of the past. India, however, does not go away—whether she is in Harvard, or in Sweden or in Paris, or anywhere else, it is in India, and more specifically Kolkata, that she feels the pull of a realisable home, a home that still remains within a sort of almost- grasp, a home that still remains an achievable horizon.

And yet the horizon, though close, is almost always elusive. In Kolkata, Nasrin if confronted with rumours and advised to leave because people fear her presence will cause a riot; in Hyderabad it does and she has to escape through the back door of the auditorium where she is slated to speak; from Kolkata to Jaipur and from Jaipur in the middle of the night to an undisclosed location… she goes from pillar to post, bewildered, hurt, uncomprehending. In a cruel mirroring of what happened with the Jagdalpur Legal Aid group women in Chhattisgarh, the final straw is when her landlady asks her to leave, ostensibly because she’s getting a higher-paying tenant, but the truth is evident to all.

Much of the time Nasrin’s prose has a curious flatness in English. I don’t think this is a product of the translation, which reads very fluently. Instead, I think this is the way she describes things, without hyperbole, and in somewhat deadpan tones, perhaps to give herself some distance from what she is talking about.

Not surprisingly, the home, and more specifically lived space, figures prominently. In every country of which she speaks, Nasrin lovingly describes the spaces within which she works, spaces that for her will always remain temporary abodes, no matter how much she tries to make them into homes.

In many ways this is a strange kind of book to read: there is a sense of the familiar, if you’ve kept up with newspaper reports on Nasrin, all the stories in here will give the reader a sense of déjà vu. The difference is in the detail: media accounts of her rejection by people she considered her friends—such as many writers in Kolkata—about whom she wrote publicly, do not do justice to the anger and the vitriol of those she targeted.

Here, Nasrin provides chapter and verse, and while it should not be, and yet it is, shocking to see how much of the abuse is sexual—‘prostitute’, ‘slut’, ‘a woman of loose morals’ and more is what she gets called—the betrayal is greater because such abuse comes to her in a land she loves, and from people she considers her own, and somewhere perhaps from the realisation that if you target people, they will target you back.

Exile is important to read not for the incidents that Nasrin describes. It’s important for the deep sense of loneliness and alienation that underlies Nasrin’s narrative. A woman of privilege and some fame, she is still on the run, without a place to call her own, and facing rejection from all the places and communities who could give her sustenance. What are the rights of an ‘outsider’ in another land? Who will be held responsible for killing a writer’s creativity? How must a constant refugee feel? What does it mean to be in a permanent state of exile, with no home to call your own? These are some of the questions that inform this narrative.