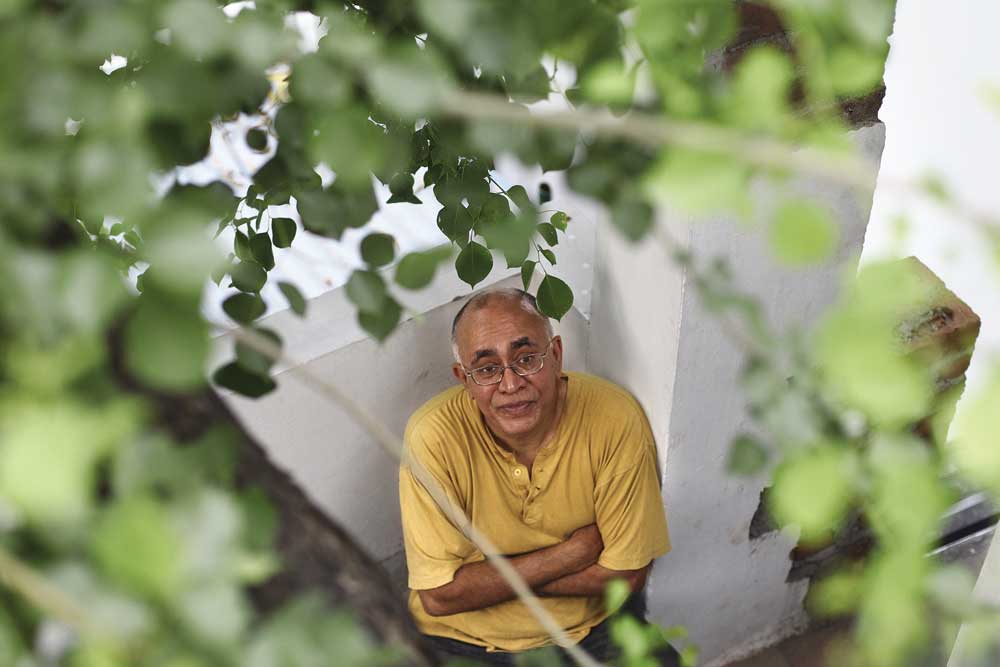 F ONE HAS followed the career of Irwin Allan Sealy, one would take particular pleasure at this little detail. Each of Sealy’s texts invents an appellation for itself. If Trotternama (1988), his first, much acclaimed novel was a ‘chronicle’, in the manner of the ‘namas’ of the medieval past, the second one, Hero (1991) was a ‘fable’. From Yukon to Yucatan (1994) was a ‘journey’, the intriguing Everest Hotel (1998), a ‘calendar’, and my favourite, the odd and evocative, The Brainfever Bird (2003), ‘an illusion’. While Red (2006) was initially published without a specified provenance, it was later subtiled ‘an Alphabet’. The Small Wild Goose Pagoda (2014), a lyrical memoir around his house in Dehradun—re-invented as Dariya Dun in Red—became ‘an almanack’, a charming Indo-English tribute to the ‘baaraa maasaa’. The China Sketchbook (2016) was, rather plainly, ‘a diary’. And the latest, Zelaldinus, an evocative verse narrative that is as playful as it is poignant, is a ‘masque’:

‘In the inner court of Akbar’s palace at Fatehpur Sikri is a broad stone terrace with a chequered pattern that resembles a game board. Here, contemporary accounts say, the emperor played a kind of chess using human pieces drawn from his harem of three hundred. Costumed in various guises, schooled perhaps by a mistress of ceremonies, his women would have presented lively masques upon this stage.’

It is believed that most writers, even the great ones, have a few central obsessions, riffs they return to again and again. Novelist Ann Patchett had once analysed her oeuvre, showing how the basic plot from Thomas Mann’s The Magic Mountain, one of her all-time favourite novels—‘a group of strangers are thrown together by circumstances and form a society in confinement’—has been ‘the story line for just about everything I’ve ever written.’ In Sealy’s case, three motifs recur: the medieval ‘namas’ or chronicles; a sandstone-hued ‘red city’ among other cities; and casting the narrative action in the form of spectacle— events unfolding on a provisional stage that is, in itself, dynamic and populated by a revolving cast of characters.

In Zelaldinus: A Masque, the Akbarnama is re-read as it were, the performance of ‘human pieces’ replace the ‘kathputlis’(of The Brainfever Bird), and the city of red sandstone is Fatehpur Sikri, the city Akbar founded in 1569 to honour his guru, the Sufi saint Shaikh Salim Chishti. He believed that it was Chishti who had blessed him with a son. Jahangir, later to become emperor after his father, was named Salim for Chishti and even called ‘Shaikhu Baba’ in his early childhood.

Between 1571 and 1585, Fatehpur Sikri served as the imperial capital until a scarcity of water led to its abandonment. But in its heyday, it was one of the most magnificent cities in the world, with Akbar’s court attracting scholars and wits from far and wide (it is here that the legends of the nine jewels of his court are set), and to obtain eyewitness accounts we need only turn to the testament of Father Monserrate, who wrote detailed notes on his time at Akbar’s court. He’d reached Fatehpur Sikri as part of a Jesuit Mission, was subsequently appointed tutor to Akbar’s second son, Murad, and even accompanied the emperor to Kabul on a military expedition in 1581. Along with the Akbarnama, Father Monserrate’s book is a valuable source for Sealy. As is the Amar Chitra Katha volume on Akbar, which is playfully referenced in its pages.

This glorious red city that had been Akbar’s obsession once (‘of all love city love comes slowest’ writes Sealy in The Brainfever Bird) provides the stage for Sealy’s contemporary masque,where Emperor Akbar, ‘disclosed on high’: ‘At that prompt the action begins on the chequered terrace, telling the story of Sikri, retelling also the story of Akbar.’

‘Whereupon a fleet of gleaming Volvo buses appears below the palace and disgorges a Teutonic tourist army bristling with cameras.’

‘Lastly there appears, grimed and dented, an elderly UP Roadways bus that judders to a halt outside the city wall. From it alights a single passenger, the narrator, Irv.’

Zelaldinus, a slender epic for our post-modern age, reminds us, once again, of the purity of the writer’s quest

Irv, holed up in a slightly shady hotel, nurses his bordering-on-obsessive love for the red sandstone city when he encounters (the ghost of) Akbar, trapped amid the corridors and the chessboard and the Buland Darwaza he loved so dearly. They form an unlikely camaraderie together—we settle on ‘camaraderie’ since it would be far too audacious to suggest that His Majesty and the commoner Irv can be friends. Within the winding paths of that camaraderie appear an eccentric cast of characters, yanked in from the present (a hapless tour guide) or lured from the past (Birbal and Tansen). There are times when Irv’s honest goading is squashed mercilessly by HM:

‘So stick to your common or garden scale, boy. This victory gate’s the camel’s eye, admitting droves of such as you, and trying only such as I.’

At other times, though, HM opens up and reveals the secrets of the human condition. (In a striking twist, Sealy reveals a sudden penchant for BuzzFeedian lists. Under ‘Heart Ravishing Sayings of HM’ we have entries such as:

• ‘absolute zero is wider than true north by half.’

• ‘true north is farther than a neighbour’s wife.’

• ‘a neighbour’s ox eats twice the measure of thine own.’

• ‘east is east but measure your bread by the baking stone.’

Four summers of camaraderie pass. On Irv’s first winter here—‘no less cruel than summer’ with ‘smoke from a hundred braziers’ that ‘stings the pilgrim’s eye’, the Emperor finally confides in him.

‘Come on, embody me, walk me away. I’ve been too long on this hill.’

‘That smacks of heresy, Irv.’

‘It’s the only way out of here—if You really want that.’

‘More than anything, Irv.’

‘Story yourself out then. Say “Zelaldinus walks down the Sikri road.”’

As Akbar and Irv fashion the ‘storying out’, there enters into the narrative Percy, an Anglo-Indian, once of Calcutta, suitor to the Karachi-dwelling Naz. To unite these star-crossed lovers, Abu’l- Fath Jalal-ud-din Muhammad Akbar, former Emperor of these parts, must leave Sikri and make his way across the India-Pakistan border. Irv stays behind, the loyal chronicler who must record both tragedy and joy with equanimity.

IN THIS AGE of marketplace-modulated publishing, where the success of a writer is measured in bite-sized celebrity trivia, the almost exacting idealism of Irwin Allan Sealy’s life—a spartan if cheerful artist’s-retreat-of-a-home in Dehradun—and work—consistently experimental, pushing the boundaries of narrative frames a little further with each book until we arrive at Zelaldinus, a slender epic for our post-modern age— reminds us once again of the purity of the writer’s quest.

I am, of course, fully cognizant of the irony that Sealy would see in my above— cliché ridden?—assertion.

As humorous as it is dashing, as adventurous as it is experimental, Zelaldinus is the sort of brave book that reminds us all that we must be thankful because, ever so often, there comes a writer who does not care about numbers or nataak , but stays at the page for hours and days, until the ghost is prepared to come and stay.

Read it, without expecting to have all your work done for you.

Be brave. That’s what (the ghost of) Akbar would say.