Aimee Nezhukumatathil turns the mundane into the magical. The Indian-American poet talks about her art and the idea of home 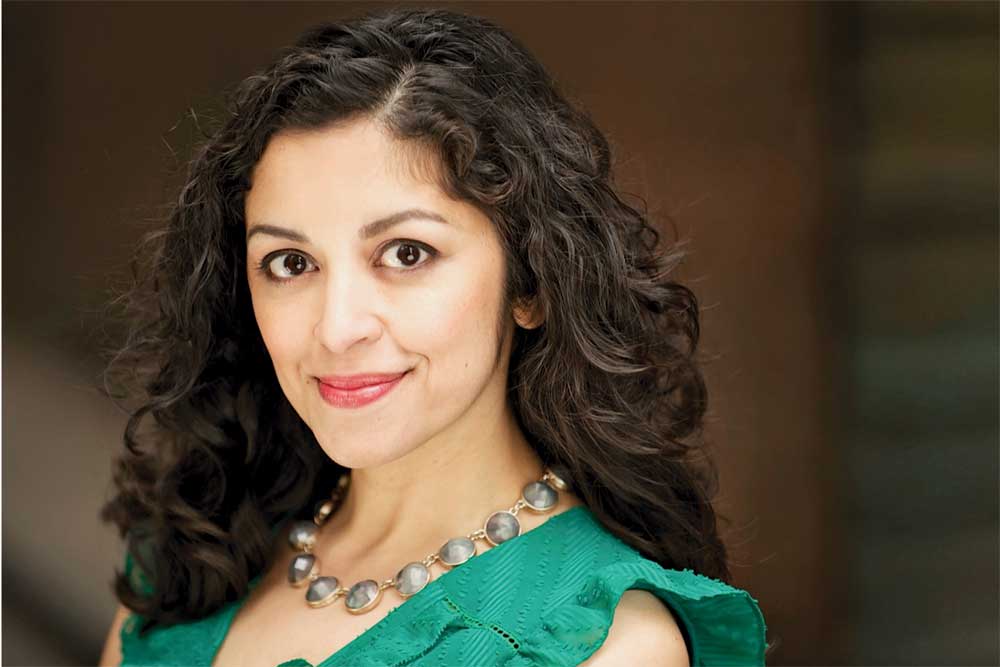 “FOR THE DAUGHTER of immigrants,” the poet Aimee Nezhukumatathil says, “the word ‘home’ becomes so fraught and so rare and special.” Her Malayalee father and Filipino mother migrated to the US from their respective countries. When they told Aimee and her sister anecdotes from their lives, they used “metaphor, music, rhythm, incantation, anaphora, humour in their descriptions of the people, flora, and fauna of their respective countries (India and the Philippines)”. She credits them as being the very first poets she ever encountered with “their phrases and descriptions being turned over and over” in her mind. Her poems are replete with sensory detail from her ancestral and lived homes across the ocean and across America.

Nezhukumatathil’s poems are an argument for tenderness and against cynicism, for specificity and against abstraction. In carefully plucked images, she distils scenes and relationships down to their cinematic essence. One walks away from her poems believing that one was there, that one knows intimately the people within them. The ordinary world is recast in her poems as an infinite pool of wonder into which one only needs to cast one’s attention to glean something new. She places unlikely pairs beside one another such as an underage girl lying on her back in a prostitution racket and her sister rimming her eyes with kohl, and the Northern Lights next to the light that glints between teeth. Reading her books is an exercise in seeing clearly an otherwise blunted world of imagery.

Her fourth collection of poetry, Oceanic, releases this summer from Copper Canyon Press. The title came to her when she was sitting by a lake flipping through her manuscript after teaching a summer workshop at the Chautauqua Writers’ Institute, a lakeside artist retreat in Western New York, and she experienced a profound moment of gratitude for the students who had “split wide open their brave hearts”, and for her family who were on their way to visit her. In that instance she realised that her love for teaching, her family, and the planet—recurring themes in her writing—were encompassed in the word ‘oceanic’.

The collection opens with an epigraph from the oceanographer, Sylvia Earle, that goes, ‘No water, no life. No blue, no green.’ Nezhukumatathil thinks of Dr Earle as “one of the greatest heroines” of her lifetime for being “the first— before Jacques Cousteau, before Rachel Carson (conservationists) even—to realise that humans are hurting the ocean.” She spent much of early life not seeing anyone who looked like her, doing the very things she loves to (write, teach, etcetera). “Sylvia serves as a reminder to be brave and to create without waiting for approval or permission.”

Oceanic is a gathering of love poems addressed to the Bengal Tiger; a fourth-grade teacher who assigned each of his students a crawfish to look after in a plastic blue pool; a C-section scar; hilarious one-star reviews of the Taj Mahal and The Great Wall of China; favourite songs by Lucille Bogan and Prince, and many other elements that are imbued with wonder for her. Her ability to show how the Northern Lights suffer in comparison to the love she shares with her husband, and the way she can imagine herself as an egg-tempera manuscript from 1352 who falls in love with the man wielding the brush have won her a wide-spread following and recognition, including the Pushcart Prize and the National Endowment for the Arts.

Do not depend on others to show you your writerly worth. The key to keep going is to cheer for others, and practise gratitude for any nods and awards passed

Despite what numerous awards, three previous full-length collections and one collaborative chapbook under her belt may suggest, Nezhukumatathil is no stranger to rejection. “Trust me,” she says, “a peek into my inbox, or back in the day, a shoebox full of paper rejections will dispel any notion that the road to publication is easy or automatic for me. I try to humble myself and take a good hard look at my poems if they come back with a rejection to look for ways to make them more surprising, more clear. You can both believe in your writing and have a healthy relationship and involvement to revision.” One of the poems in Oceanic, ‘Sea Church’, was rejected 19 times with small edits made throughout its journey till it was finally accepted by Poetry magazine.

Eight years have passed between her last collection, Lucky Fish, and Oceanic. In that time, she has been raising two young sons, editing poetry at Orion Magazine, and teaching writing and environmental literature, first at the State University of New York, Fredonia, and now at University of Mississippi. She also co- authored a chapbook called Lace and Pyrite with the poet Ross Gay when they “both were in a fallow (ha, pun intended) period of writing but our respective gardens were growing and thriving”. Their letters to each other first began as “garden reports” but “grew into poems on their own”.

The connections between gardening and writing come to her because “there is a close attention paid to both, there’s a trial and error to see what blooms and what is weed. There are questions that come out of the most satisfying gardens and poems— can this weed turn into beauty if you leave it, if you water this image too much will it weaken? How much light and dark to give a stanza, a line, an entire poem?” Even when she doesn’t have a pen and paper with her in the garden, she’s making “note of sound, of smell, of textures and tastes”.

She teaches environmental writing to introduce her students “to writers who ignite a sense of protection of their planet, very much in the veins of Rachel Carson who said, ‘The more clearly we can focus our attention on the wonders and realities of the universe about us, the less taste we shall have for destruction.’ I want my college students (and my sons) to have less taste for destruction.” The environmental writing she was taught as a student was almost entirely White writers, and she shows her students that there is “a wider range of people writing and caring about the environment”.

THE NEXT CHAPTER in Nezhukumatathil’s writing is an illustrated collection of essays on the natural world that will come out in 2019 with Milkweed. The essays bring to light “little-known animals, plants, and natural phenomenon in the context of my unusual childhood growing up in rural America; navigating the parent-push towards science while finding myself drawn toward language; and parenting in a digital culture that rewards isolation.” They’re also a record of “moments of beauty and discovery” between her and her sons.

As a writer who teaches and mentors other young writers, she’s passionate about helping others “get a seat at the table when one has had several invites to the party time and time again.” She’s addressing her younger self in her twenties as well as any other writer starting out who needs to hear it when she says “do not depend on others to show you your writerly worth. I say this as someone who was passed over for any writing award given by my high school, college, and grad school combined.” The key to keep going, for her, has been to “cheer for others, and practise gratitude for any nods and awards passed” her way.

In the wake of the Me Too movement, she believes that “time is up for predators and harassers in literary spaces” though she points out that people have been calling out names for years now. She’s troubled that “people look the other way and still hire [predators], still publish them, still book them for readings and festivals”. She adds that “there is a circle of hell for anyone who knows of abuse and does nothing to keep it from happening again. I’m tenured and finally in a supportive department who has no tolerance for this kind of behaviour. If I’m not using my position to help those who cannot speak up, to help protect our students and others who are looking to get their foot in the door and just have their writing noticed—for me, it’d be quite hard to sleep at night.”