A War in Memory 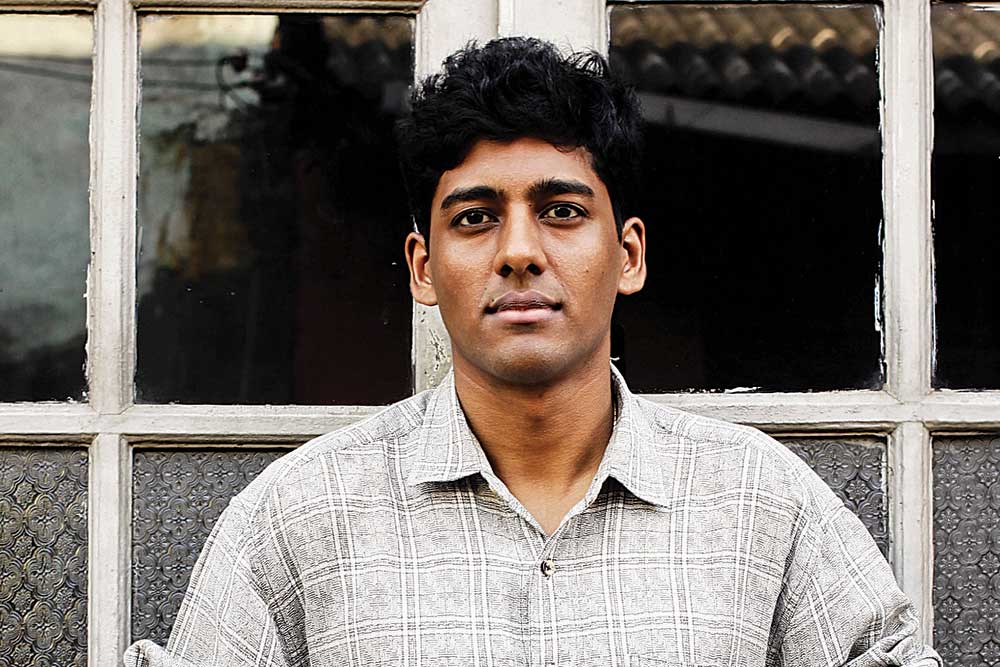 ANUK ARUDPRAGASAM has a photo tacked on the wall in front of him. It is of a teenage boy bathing at a camp (where people were interred for a year or two after the war). The water cascades down on him. It is a picture that travels with him from his parental home in Colombo to his university in New York, and one that he pins from wall to wall. For him, moving between Colombo and New York is not shuttling between continents and countries. Rather, it is like moving between two rooms, he says. Just as the photo finds a nook on different walls, so do his books, pots, pans, and his curry leaves. Always the curry leaves. But this one image of a boy bathing at a camp is of particular importance to the young author as it gave rise to his debut novel The Story of a Brief Marriage (Fourth Estate; Rs 499; Pages 193).

This pithy work is a political novel set in Jaffna just before the end of the war in 2009. While the setting is the conflict that lasted 25 years and tore apart the north and east of the country, it never uses the word ‘Sri Lanka’ or ‘LTTE’ or ‘Tigers’. ‘Jaffna’ is used only once. The author chooses more context specific words such as ‘movement’ and ‘cadres’ and brings out the horrors of the war by spooling a tale around its two principal characters, Dinesh and Ganga.

Speaking on the phone from Columbia University, where he is completing his doctoral dissertation in philosophy, Arudpragasam explains this nameless quality of the work: “In India, or Sri Lanka, when readers read about such a conflict or violence, the immediate response is to understand it politically. How did this happen? How did the government do this? Who was responsible? How do we punish them? By asking these questions, you are not engaging with the human situation. It is a way of avoiding the human situation. By not giving names or specific details and a specific history, I was trying to force myself and the reader to really dwell on the immediate situation.”

In the 12 hours that the novel spans, Dinesh, an evacuee, is approached by a doctor to marry his daughter Ganga in a makeshift camp. Together Dinesh and Ganga try to carve out a semblance of normalcy even as shells fall around them. Arudpragasam foregrounds the human story in a war by doing away with history and background and concentrating simply on the moment itself. Even though he has been in the US for many years, having completed his BA from Stanford University in 2010, he has no wish to write for a Western audience. He says, “I am not here to teach people a history lesson. If they want, they can go read a Wikipage about it. I am writing for people who are familiar with the context. It also bores me. It is boring for me as a writer to explain things.”

This lack of explanation heightens the human tragedy as it shows how trauma alters the duration of time. Suffering occurs in slow motion. Mundane moments become exalted into theatre. The book opens with a blow-by-blow account of the amputation of the right arm of a young boy. In graphic detail, the image of a doctor sawing through flesh with a jagged motion comes vividly to life. Soon after, Arudpragasam describes an attack with startling clarity: ‘There was, always, before the shelling, for the slenderest moment before the earth began shaking, a faraway whispering, as of air hurtling at high speed through a thin tube, a whooshing, which turned, indiscernibly, into a whistling. This whistling lasted for a while, and then, no matter where you stood, there was a tremulous vibration, the trembling of earth underfoot, followed by a blast of hot air against the skin, and then finally the deafening explosion. It was a loud, unbearably loud explosion, followed immediately by others, so loud that as soon as the first one came the rest could no longer be heard.’ Thick descriptions such as this, where a single moment is drawn into numerous lines, allows the author to expand and constrict time as he deems fit.

I am not here to teach people a history lesson. I am writing for people who are familiar with the context. It is boring for me as a writer to explain things

How does trauma alter time? Arudpragasam replies, “Trauma forces one to be in the present, it forces an immediacy. You are cut off from the past because of what has happened. You are cut off from memory, and the environments you associate with the past. On the other hand, because there is so much violence and the future is uncertain, you cannot think far into the future. You cannot think of who you used to be, or who you will become.” This submersion in the present, where the fabric of ‘ordinary life’ is rendered useless, is brought out expertly in The Story of a Brief Marriage. Those in the camp do not talk to each other simply because there was no longer anything to say. The trauma of the war effects them so deeply that they are altogether unable to connect, at the most basic human level.

For Arudpragasam, language itself is a vehicle fraught with complexities. Growing up in Sri Lanka, his family and he would travel to Tamil Nadu every December. There he would revel in the sounds of Tamil, a language which people back home were afraid to speak. For him, the cacophony of Madras after the quiet of Colombo was a symbol of freedom.

Today, he finds that he is reading and writing more and more in Tamil. He has not yet published in his mother tongue, but he hopes to in the future. Educated in English, he would talk in Tamil at home. But the conversations around serious topics such as the economy or politics would happen in English even at home. He says, “At the end of the war, I was quite politicised. When you see so much killing and violence, you want to understand it in a historic way… And you can’t help but trace this violence to colonialism and colonial institutions. It really made me think why am I writing in English… I recognise the privileges the English language gives me. But it is also a mark of shame.”

Arudpragasam realises he is writing in English about people in his community who cannot read and write the language. He draws parallels between the history that causes violence on the Tamil people in Sri Lanka and the violence that urged him toward the study of English.

Arudpragasam wrote much of this book in Colombo. But he is clear that once he completes his doctorate, he wishes to move to India and not Sri Lanka. India is a country close to his heart; he lived in Chennai for a year after completing university. And has spent months in Delhi as well.

For him, distance from the subject matter is of little relevance. “I am as far from Vanni (the site of the war) in Colombo as I am in New York. Anyone writing on the war in Vanni is writing from a position of distance. This novel is not written as a representation of a particular person’s situation. It is written as an interpretation of such a person’s situation from a distance.”

It is this distance that allows for the interpretation to be authentic.