A Hole in the Earth 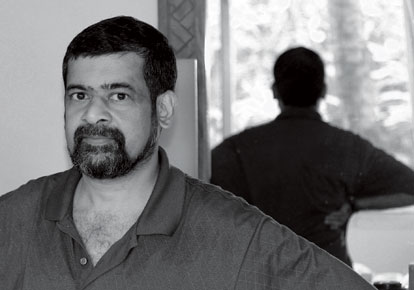 Vijay Nambisan began his writing career as a poet, winning the first ever All India Competition (organised by The Poetry Society of India in collaboration with the British Council) in 1988 for his seminal poem Madras Central, which ends with an oft-quoted description of how the itinerant traveller carries ‘unwantedness’ from place to place. But after that halcyon moment, Nambisan has embarked upon a distinguished career as a journalist and critic, whose best-known work, Language as an Ethic laments the use of English in shoddy and disingenuous ways, particularly in Indian journalism. So it came as something of a surprise to Adil Jussawalla, who provides the preface to his new book of poems First Infinities (Poetrywala, 2015), that Nambisan had continued writing poems all along.

This latest collection is organised in three sections—Loss, Balance and Profit—and in a sense the book represents a kind of accounting of memories and experience, both collective and subjective. Taken individually, the poems have a particularised emotional heft but taken together, they represent the unfolding of a historical consciousness, always attuned to the ways in which language conspires to help us articulate ourselves, sometimes correctly, at other times duplicitously, but always with an unerring momentum that renders the self discernable in light of self-reflection. These are unflinching poems that pay homage to the other poets that Nambisan considers his precursors and his friends, and so we see Dom Moraes, Arun Kolatkar and Nissim Ezekiel addressed directly in the opening poem Dirge, which sets the tone for the poems that follow.

A dirge of course is a lament for the dead and there is a sense in this opening poem that Nambisan yearns both for this earlier generation of poets writing in an ‘Indo-Anglian tongue’ and for a culture that once respected the efforts of these writers more than the art of poetry is respected today. ‘Then the world shone, by their showing,’ the poem avers, ‘then publishers seemed to care,’ whereas now we live in a ‘wilder whirl of weeklies, tabloids titting on page threes’. Formally, this poem is also atavistic, relying on the old gold standard of rhyming couplets, long since skewered by more experimental ‘innovators’ as beneath their dignity to sustain. But Nambisan’s attention to craft revivifies the form so that the rhymes don’t hammer home with the heavy knock of a metronome—they nimbly incorporate sound and sense, so that a word like ‘speak’ is made to rhyme with ‘Mozambique’, and there are some delightful internal rhymes like ‘friends now fettered’ and ‘lovely-lettered’. The poem also uses anaphora to great effect, the last line of each stanza repeating the phrase ‘kisses take from my missis’. (Implicit in that formulation is the notion that the speaker also takes kisses from his misses, of which there are a few no doubt made palatable by the fact that the author acknowledges them even before we do.) As Nambisan himself writes in his Foreword, ‘a few of these poems must be considered juvenilia, and have been called self-indulgent, but I take this opportunity of getting them out of my consciousness, where they’ve festered too long’.

We are prepared then for Bhima in the Forest, which makes of the second of the Pandava brothers a kind of cartoonish figure eating the flesh and drinking the blood of various animals, or a poem like ‘The rain is pouring down again’, which personifies the grass as ‘overjoyed’, calls those who would mow it down ‘murderers’, and makes a rather clumsy analogy to ‘our [own] proud roots [that] clutch/ at tenuous soil’. Thankfully these efforts are the exception and not the rule, for most of the other poems evince a seriousness of purpose far beyond mere juvenilia.

The best of these poems, like Pills, offers us a strident critique of our over-medicated society, opening with the fact that ‘some pills are sugar-coated. / And some are not’. Those prescribed for the ailments of the mind—a rapidly growing category if the latest edition of The Diagnostic and Statistical Manual of Mental Disorders provides proof enough of the exponential growth of purported mental illness, along with no shortage of pharmaceutical companies prepared to sell us their formulary cures—are almost exclusively undisguised in flavour. They are, as the poem expertly tells us, always au natural. ‘Why must this be so?’ the poem asks and then proceeds to present us a possible answer in a final stanza that is simultaneously lyrically potent as it is philosophically apt:

Is it so that we,
Carrying our bitterness with us always
Like a mask behind a mask, should know
What it is to be unmasked—we should be told
This is the bitter taste we give to a sweet world
And learn to sugar coat ourselves like the rest?

Indeed much of First Infinities can be read as a corrective against the very act of sugar-coating, against the proliferation of bromides and platitudes we use to mollify ourselves. It’s telling, then, that another poem, Diogenes, is a dramatic monologue in the voice of the Greek philosopher who founded the school of Cynicism and advocated for a life in which the desires for wealth, power and fame were repudiated for a bucolic existence free of material possessions. Throughout this collection, Nambisan skewers the narcissism and puerile fixations of modern life, in a manner which Diogenes would approve of. And this is where the subjective interests of the poet conflate with a larger historical consciousness, where the world of ancient folklore is brought into contact with the mythology of the modern media. It is surprising, delightfully so, to see poems about Kalki, Vishnu’s final avatar, and Chyavana, the Hindu rishi from the Mahabharata, alongside a poem like Names, which takes on the corporatisation of language, asking: ‘Why should U2, iPod live?’ and ‘Does Paris Hilton live? Must will.i.am exist?’

Nambisan is at his strongest when his poems are able to abide on multiple connotative levels, and so a poem like The hole in the earth begins with what seems to be an evocation of the underworld:

There is a hole through to the earth’s bowels,
I glimpsed it yesterday, outside the gate,
A view of voided ground yielding voiceless vowels,
Saying without speaking: and through what ways
Winding, through what beatitude, what hate,
What hope of sanctity I do not know
It goes because last night I knew my place
Was not to know.

This chasm of nothingness yawns below us during every waking moment, and yet we choose to ignore it because we cannot know what terrors reside there. We are not equipped to know. But just as we are about to verge into a Dantean exploration of the inferno, the speaker pulls the rug out from under us. Just as, in the light of morning, he intends to find out ‘what they keep / Below of us without knowledge of day’, he finds that ‘today the workmen came. / Replaced the manhole cover, and then went away.’ That’s a masterful move, reminiscent in some ways of The Forge, the title poem in Seamus Heaney’s early collection Door into the Dark, where like a wormhole burrowing into another dimension, a darkened doorway reveals a blacksmith working away at his craft, oblivious to the fact that society has passed him by. The brilliance of that sonnet is how that passageway takes on both a literal and metaphoric resonance, as if we were climbing from consciousness into the unconscious mind, and similarly, Nambisan’s poem operates on multiple levels, the hole in the earth a source of the dark mystery at the core of existence, but also just the product of simple construction work.

Another such poem is Lint, in the line of Pablo Neruda’s elemental odes, imbuing this substance we readily ignore with substance and power. ‘Lint is light’, the poem tells us, ‘captured in windows, kept captive against the dark./ It is all of yesterday that we wished to forget, / Creeping silently back when we thought it was gone.’ Indeed that attribution seems the perfect summation of First Infinities, which in the final tally, the act of accounting which the structure of the book asks us to undertake, is a triumph. The poems simultaneously possess a subtlety and restraint along with an excess of emotion that never quite corrodes into melodrama. Indeed it is the lyric record, crafted in the style of the old masters like WH Auden and Robert Graves, of all of yesterday—and even today—that we wish to forget but that nonetheless creeps back silently when we thought it was gone. This collection is proof positive that nothing, no act of compassion nor disregard, no mythological figure nor monomaniacal politician, ever really disappears, but recurs in the liminal mind-field where only a poet as skillful and persistent as Nambisan can ever really quarry it.