We Can Still Redeem Litchis From Bad News

The truth about the bothering berry 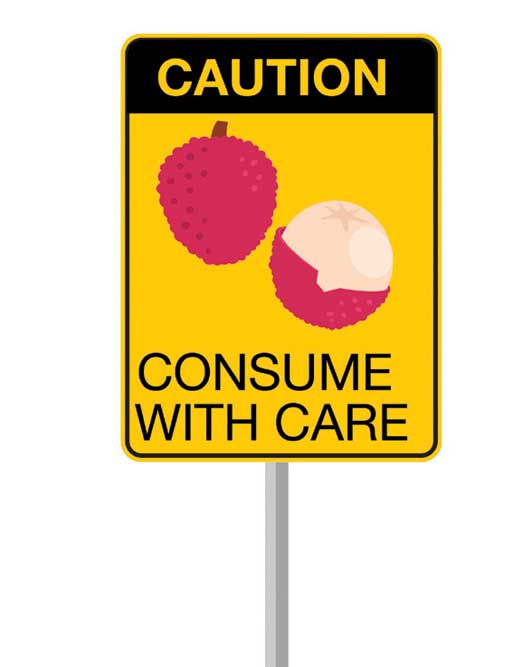 HAVING GROWN up in the city of Lucknow and spent most of my adult life in the plains of northern India, I dread the summer season, when the temperature soars to over 45≤ Celsius. One of the attractions that makes the scorching summer tolerable, even exciting, is the availability of numerous varieties of juicy summer fruits that delight the taste buds and cool the insides. Mango, of course, continues to be the king of fruits, but for me, as for many others, the luscious berry called litchi is high on the list too.

The litchi originated in southern China. The first descriptions of its cultivation dates to the 11th century, although it is believed that it was consumed in China as far back as 2000 BCE. Litchis reached India in the late 17th century via the Northeast and Myanmar. Presently, India is the second largest producer of litchis in the world (after China), and almost half of the produce is from Bihar, much of it from Muzaffarpur alone.

As a litchi lover, I read with consternation reports that started appearing in medical journals a couple of years ago that consumption of this fruit was associated with an encephalitis- like, often fatal brain disease in children in Muzaffarpur, the litchi capital of India. Initial reports authored by scientists from Vellore and Indian Institute of Toxicology Research, Lucknow, suggested a strong association between litchi consumption and the fatal brain disease. In January this year, a study by National Centre for Disease Control (NCDC), India, and Centre for Disease Control (CDC), Atlanta, published in the Lancet Global Health confirmed this finding. The authors demonstrated the presence of toxins from litchi in the urine and blood of the affected children. Children under 15 years of age admitted to two hospitals during the months of May and June 2014 with seizures or altered consciousness were studied. Most children fell sick between 3 am and 8 am, and the majority had missed their evening meal. Common to them was the consumption of litchis. All signs of infection were absent; tests carried out for viruses were also negative. An intriguing finding was the low blood glucose level in the majority of the children—values as low as 8 mg/dl were reported. Tragically, like every year for the past 20 years or so, about one third of these children died. The administration of intravenous glucose in time was found to help reduce the likelihood of death.

Is the Muzaffarpur litchi toxicity story a unique finding? Outbreaks of a similar illness have been reported in Vietnam and Bangladesh. Although associated with litchi consumption, the exact relationship with litchi or its contents was never clearly established. It has been known since 1962 that litchi contains naturally occurring toxins called hypogycin A and methylene cyclopropyl glycine (MCPG), which lower blood glucose. Toxins are found in greater amounts in unripe fruit than in fully ripe ones. Litchi toxins cause a severe disruption of metabolism. When we starve, blood glucose levels tend to drop—the liver then pours out glucose into our circulation as a protective mechanism. Toxins in litchi block the liver’s glucose synthesis and so the organ is unable to respond to food deprivation. In Muzaffarpur, many of the affected children were from economically weaker sections of society, and were malnourished. When poorly nourished children with limited liver stores miss dinner, their sugar level tends to drop even more. This drop in glucose leads to seizures or epileptic fits, loss of consciousness, and along with other metabolic disturbances, may prove fatal.

An increase in commercial litchi production, which has made the fruit abundantly available in areas like Muzaffarpur, has led to easy access. It is quite understandable that children preferred to quell their hunger by consuming delicious litchis in orchards and subsequently missed their evening meal.

For safe’s sake, litchi consumption by children should be controlled by parents. This is especially true of those living in litchi growing areas. And children should never miss a meal, particularly dinner. In case of illness, the blood glucose level should be checked, and if needed, glucose given.

Does this mean the beginning of the end for litchis? Probably not. The fruit will continue to be enjoyed across India and the world—but yes, certain precautions in its consumption will become the norm. Urgent public education in this regard is a must.

And maybe a day will come when we will actually be able to extract these low blood glucose producing ‘toxins’ from litchis and use them to treat diabetes.