That is what the Prime Minister is on the global stage 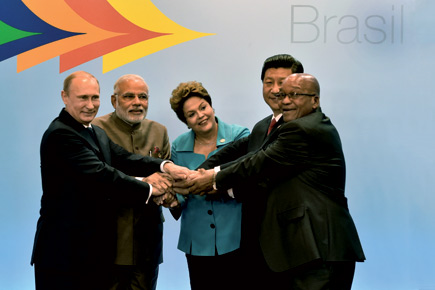 That is what the Prime Minister is on the global stage

Before he left for the BRICS Summit in Fortaleza, Brazil, Prime Minister Narendra Modi had struck down a suggestion by his own external affairs establishment—a few senior officials wanted him to say ‘no’ to the creation of a BRICS development bank, seen as a counterweight to the World Bank, if New Delhi wasn’t made its headquarters. Modi dismissed the recommendation as “agitationist” and argued that it was no time to adopt such “rigid” posturing. The BRICS group, made up of Brazil, Russia, India, China and South Africa, finally agreed to create a development bank that will be based in China’s commercial capital Shanghai, but with an Indian appointed as its first president; meant for project lending, this bank will have an initial capital of $50 billion, funded equally by each country.

“Had the Prime Minister listened to that recommendation, which, in hindsight, looks entirely premature, the creation of the development bank as well as a reserve fund, along the lines of the International Monetary Fund (IMF), would have remained a mere dream at a time when emerging economies such as ours need more finance for infrastructure projects and mechanisms in place to face a future economic crisis,” a Foreign Ministry official tells Open. The formation of such institutions, he emphasises, comes in the wake of renewed demands by the BRICS bloc for reforms of the IMF, where voting rights remain skewed against emerging countries.

In the spirit of that argument, the BRICS fund will offer equal voting rights to all five members. This reserve fund, meant for external-crisis relief, will raise $100 billion; China will make the biggest contribution of $41 billion towards this fund, followed by India, Brazil and Russia putting in $18 billion each, and then South Africa with $5 billion. The emergency reserve fund, which was announced as a ‘Contingency Reserve Arrangement’, is broadly aimed at helping developing nations avoid ‘short-term liquidity pressures, promote further BRICS cooperation, strengthen the global financial safety net and complement existing international arrangements’. In the current global context, the immediate aim would be to fight off any volatility— in the value of a country’s currency, for example—that may arise from the US Federal Reserve doing away with its stimulus policy in the near future.

It was Modi who insisted on equal participation by all five members in the development bank and on the ‘one country one vote’ policy of the proposed reserve fund, showing that the Prime Minister was at his assertive best not just at home, but also overseas. The logic was that unlike the Bretton Woods organisations and the Asian Development Bank, which are dominated by the US and Japan respectively thanks to their disproportionate shareholding, no country should get to dominate others in the new entities. “He was very firm in overruling his colleagues’ suggestions—as well as at the [recently held] BRICS meet [at Fortaleza],” claims the foreign ministry official.

That image of the ‘flexible yet firm’ Prime Minister fits in with Modi’s desire to wield a more nationalistic foreign policy, one that aims to assert India’s national interests abroad and still gets work done, notes Michael Kugelman, an avid India watcher and senior program associate for South and Southeast Asia at the Woodrow Wilson International Center for Scholars. “An important way of doing this is making sure India’s concerns are voiced in multilateral settings, such as BRICS meetings. A South Asian Bank would help promote Modi’s goal of better relations within South Asia in order to promote greater regional integration and, by extension, greater economic growth,” Kugelman elaborates.

Rathin Roy, director of National Institute of Public Finance and Policy, and member of the Seventh Central Pay Commission, feels that getting BRICS to adopt the ‘one stakeholder one vote’ principle, which is in direct contrast with the practice at other development banks, is a big gain for India. Roy, who has often been consulted by the Government on the nuances of a BRICS development bank, has always argued in favour of a “broader core membership” for India to combat potential Chinese dominance of such a bank. The five BRICS countries together represent 40 per cent of the world population and a fifth of the global economy.

The Prime Minister’s special emphasis on relations with immediate neighbours was on full display at his swearing-in ceremony on 26 May this year, to which he invited the likes of Prime Minister Nawaz Sharif of Pakistan and Mahinda Rajapaksa of Sri Lanka despite protests. Most leaders of South Asian Association of Regional Cooperation (SAARC) countries turned up for the grand ceremony. While he highlighted the importance of trade within the region in his talks with Sharif and others, his first visit to a foreign country was to India’s northeastern neighbour Bhutan.

That is how it should be, feel many analysts. Edward Luttwak, a historian and expert on Subcontinental politics, goes to the extent of asking Modi to skip the “BRICS fantasy” and instead focus on improving relations with Bangladesh, Sri Lanka, Nepal and Myanmar and so on by instituting what he calls ‘US rules’. He argues that India will do well by not following China in quarrelling with neighbours. The People’s Republic, as he sees it, is in the process of paralysing itself by picking fights with all its neighbours such as Vietnam, India, Japan, Taiwan and so on. This, he says, is a fatal mistake for any country, and would even be for the US if it attempted something similar. “That is why the US never bullies Canada or Mexico,” says Luttwak, “If the US had gone after Canada or Mexico (by quarrelling over land, natural resources or for regional dominance), they would have had Soviet bases there. The US doesn’t even opt for ‘hot pursuits’—chasing criminals once they cross the border to Mexico or Canada.”

According to Luttwak, who has authored many books on China and military strategies of empires: “The power balance is off the table in all dealings with bordering countries, which must be treated with 101 per cent consideration. The Pakistani military will sabotage reconciliation, but all the others would respond.”

Kugelman agrees that building ties with SAARC neighbours is at the heart of Modi’s foreign policy, which is far more nationalist than that of his predecessor— who headed a coalition long hobbled by a Nehruvian mindset and anti- Americanism. “I expect Modi to make a bigger push than his predecessor to improve ties with India’s neighbours,” says Kugelman, “South Asia is one of the least integrated regions in the world (in terms of trade and other measures of connectivity), and a big reason for this is that so many countries in this part of the world simply don’t get along.”

Modi, says the Pennsylvania-based India expert, understands how politics has constrained the chances of forging a better integrated region, and because of his strong interest in trade and investment, he will want to address these problems. “Consider one of Modi’s first moves as Prime Minister: he invited the leaders of all SAARC countries to his inauguration,” says Kugelman, “He was sending a message: despite all the problems of SAARC, he intends to engage [with] it and will waste no time in doing so.”

Meanwhile, many former diplomats and foreign policy experts, including Kugelman, contest the view that a hardline nationalist government will imperil relations with Pakistan. The Foreign Ministry official says that Modi will follow the ‘trade route’ to building relations with India’s hostile neighbour. Kugelman believes that the safest way is by focusing on the soft diplomacy of trade and economics. “There is great potential here, given that India and Pakistan have been negotiating a Most Favoured Nation [trade] relationship, and they really aren’t that far away from consummating it. Modi, as a big free-market supporter and pro-trade leader, understands the advantages of a formal commercial relationship with Pakistan.” However, he adds, there are numerous challenges on this front. “One is the apparent obstructionist position of Pakistan’s security establishment, which is reluctant to draw closer to India. The other, admittedly, is Modi himself. If India is hit by a terror strike that is traced back to militants in Pakistan, Modi will likely engage in sabre-rattling and other provocative actions that could increase bilateral tensions and imperil any forward movement made on MFN [status].”

Many pundits expect India to step up collaboration of all sorts—including the military kind—with Japan as part of a larger coalition-building effort that could benefit other emerging countries as well. The simple logic is that even if the Chinese, who have made incursions into Indian territory in the east, do not take Indian warnings seriously, Beijing cannot ignore an Indo-Japanese coalition.

At the BRICS Summit in Brazil, Modi asked Chinese president Xi Jinping to address New Delhi’s concerns over such incursions, and also held talks on setting up Chinese industrial parks in India, besides taking up trade issues. However, many China watchers feel that Beijing will not take India seriously until it forges a coalition of sorts in the region and beyond.

Certainly, Modi’s intensive diplomacy will extend beyond South Asia as he seeks to improve relations with the rest of Asia as well, especially with Japan. “The India-Japan relationship is a logical partnership—two countries linked by concerns about China’s rising influence in the region. There is also a very heavy trade dimension to this relationship. Modi will want to deepen ties with Tokyo for sure,” says Kugelman.

A former diplomat feels that both Modi and Shinzo Abe, being nationalists, could “gel easily” on matters of a global worldview.

Most experts that Open spoke to say that the most noticeable foreign policy trait of Modi would be his response to provocations from across the border. “Don’t expect Modi to be nearly as restrained as Manmohan Singh was,” says Kugelman, “This isn’t at all to say Modi would provoke a conflict, but his response would be noticeably more robust than that of the last government.”