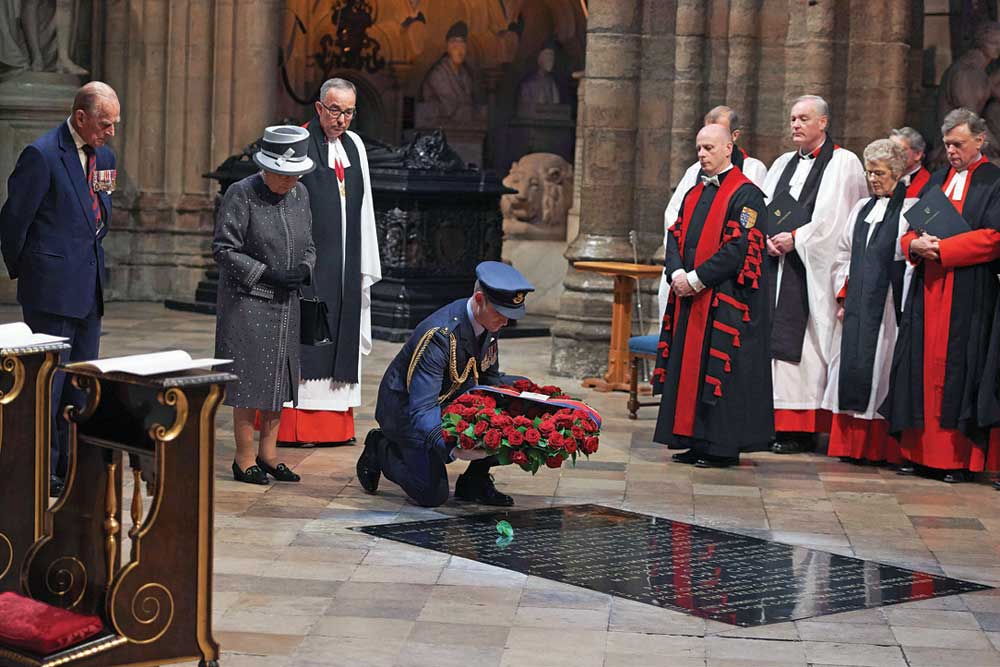 PAST, PRESENT AND future fused together last week as Britain stepped back from the giddy immediacy of political turmoil to take stock of a military tragedy that was fought out a hundred years ago. It was a poignant moment India shared with Queen Elizabeth and her consort who bowed their heads in Westminster Abbey, while their son and grandsons did the same on a windswept, rain-lashed pasture in the French village of Thiepval. The triple- arched brick memorial there, 45 metres tall, seemed remarkably familiar until I realised why: the handiwork of Sir Edwin Lutyens, it could have graced New Delhi railway station.

This wasn’t the real connection. I had forgotten India’s participation in the Battle of the Somme in July 1916 until Dame Shirley Williams, the veteran British politician and scholar, recalled the “turbanned cavalrymen who suddenly appeared on the fields of Picardy”. She had in mind the 20th Deccan Horse and the 34th Poona Horse, the two Indian regiments that staged a cavalry charge on 14 July with the British Seventh Dragoon Guards. The flash of futile heroism of the Battle of the Somme in which 19,240 British soldiers were massacred in a single day must have seemed grimly pertinent to David Cameron and his wife, Samantha, as they too stood respectfully at the Thiepval memorial. He had thrown away his career in a moment of reckless morality and plunged his country as well as the 28-nation European Union into turmoil.

Britain is without a government. The chancellor of the exchequer, George Osborne, has ominously abandoned his promise to convert deficit into surplus. Scotland and Wales, having voted to remain in the EU, are fretting to break away from England and Northern Ireland which voted to leave. Even the capital city of London, the world’s financial hub where 200 languages are spoken, seeks independence to retain its links with the EU. Five Conservative contenders are squabbling to succeed Cameron at 10 Downing Street. There are dark hints of treachery and intrigue, promises made and broken, of deliberately leaked e-mail messages, and floods of abuse choking social media channels. When Benjamin Disraeli called the party the ‘Church of England at prayer’, he cannot have meant this bunch of plotting, back-stabbing conspirators. Rivals snap and snarl around Jeremy Corbyn, the Labour party leader whom fellow MPs rejected but who clings on, claiming he has the support of the country. Some whisper that Corbyn’s ambitious lieutenants keep him under lock and key so that he can’t respond to sane counsel and step down.

‘This is not war; it is the ending of the world,’ an Indian soldier wrote home from the cloying mud, the choking gas, dangerously flying metal and relentless bombardment of World War I. He would have found today’s political upheavals equally cataclysmic. But the serenity of British life seems undisturbed as the country’s leaders take time off from the snake pit of political strife for a long night of ceremony in honour of what was billed long ago as ‘the war to end all wars’. According to Kunwar Natwar Singh, Indians have no sense of history, only of eternity. That may partly be because history is always the victor’s version, and Indians have seldom been in that privileged position. In contrast, Britain’s victorious kaleidoscope transforms the history of mankind into sequences in its own all-conquering saga. Like the authorised version of the Bible, it’s what the world has come to accept. The first and most important step in convincing others is to be convinced yourself to start with. No people can beat the British in believing implicitly in their own myths.

There’s an old story of a Briton stranded in a continental European airport with two doors marked ‘Natives’ and ‘Foreigners’ marching up to the nearest official to demand, “And where do I go?” Membership of a borderless Europe appeared to resolve that dilemma. But no longer. Everything is in the melting pot after the 23 June referendum. No matter who replaces Cameron and no matter how Labour resolves its leadership problem, a dream has been sacrificed on the altar of personal ambition and national narrow-mindedness. Britain wants the European free market without Europeans. Guy Verhofstadt, a former Belgian premier, blames “the selfishness of one man who is ready to do anything to become prime minister.”

In his first public response to the referendum in which 52 per cent of Brits voted to leave the EU, Boris Johnson, the journalist turned politician who was Mayor of London for two terms, argued the “EU was a noble idea for its time, it is no longer right for this country.” Burly, boisterous and blond, Johnson represents the British contradiction. His name should really be Boris Ali, for he is descended in the male line from a Turkish immigrant. He was born in New York, brought up in Brussels, and his wife is half Indian. He spearheaded the campaign to quit the EU and is hoist with his own petard. No one knew whether he meant the dream of international unity had been overtaken by other more pressing factors or whether it didn’t suit the exceptional country that is Britain. If the latter, the question inevitably arises: Did it ever? Like the Briton at the European airport, the United Kingdom has always been jealous of its supposedly unique identity. My Schengen visa allows me to travel freely across all 27 EU countries. The UK alone demands a separate visa. The decimal currency of the euro is valid in all those 27 countries. But not in the UK. Sterling is also decimal, but jacket pockets are weighted down with the unique unwieldiness of Britain’s coinage.

When Britain first contemplated joining Europe, two girls in my office—I lived in London then—grumbled about Greenwich Mean Time giving way to European time and losing the peculiar classification of British trains which in those days had first and third class but no second. “Next they’ll do away with the Queen!” one of them—not a conspicuous monarchist but seeing the throne as symbolising nationhood—muttered. A Danish politician told me in the 1960s that the British would never fit in with other Europeans because their Indian experience had marked them for life and beyond.

The Indian connection alone never argued against a larger vision. In October 1938, Arthur Moore, the celebrated editor of The Statesman who had previously been special correspondent of The Times (London), in crisis-stricken Europe, wrote an article titled ‘A Federal British Commonwealth’ in the old Manchester Guardian. Moore later boasted that The Statesman ‘educated and converted India on this subject (nowadays called globalisation) before either America or England took any interest in it’. But continental Europeans would have looked askance at Moore’s one-world theory.

Instead of sending raw young recruits to be mown down in the fields of Picardy, Britain is now sending armies of bank backroom staff to prepare for the financial disentanglement that the divorce demands

Their suspicions of Britain were reflected in the story about three men, English, German and French, marooned on the high seas in a frail boat with just enough food and drink for one person to last a few days. It was decided that lots would be drawn, the two who drew short straws jumping overboard so that one at least had a chance of survival. The German was first. He stood up, gazed at the sun and the sky, commended his wife and children to the other two’s care, sang Deutsche Deutsche, über alles! and splashed into the fatal deep. The Englishman’s turn came next. He, too, stood up, gazed at the sun and sky, spoke tenderly of his wife at home, sang a robustly patriotic God Save the Queen, and pushed the Frenchman overboard.

The EU has always appeared to lack a philosophical dimension, possibly because it began with the European Coal and Steel Community of 1951. Bernard-Henri Lévy called it ‘sad, grey and technocratic’. Yet, from time to time, the occasional European thinker did allow imagination to roam over a past when large areas of Europe were imperially united. There were the empires of the Romans, the Byzantines and the Franks. The Holy Roman Empire and the Ottoman Empire didn’t collapse until the end of the war that last week’s ceremonies commemorated. Alexander, Tsar of all Russia, the most advanced internationalist of the day, suggested a kind of permanent European union at the Congress of Aix-la-Chapelle in 1818, with international military forces defending states against violent change. The end of World War II provided a true impetus. Four years after Winston Churchill’s demand for a ‘United States of Europe’ was born the notion of a supranational foundation that would ‘make war unthinkable and materially impossible’ and reinforce democracy amongst its members, as described by Robert Schuman, France’s visionary foreign minister.

A question mark now hangs over that dream. The EU won’t lack new members: Turkey, Montenegro and other candidates are waiting in the wings. But demands for similar referendums in France, Italy and the Netherlands may not easily be suppressed. Each time a national government disagrees with some decision taken in Brussels, it will try to blackmail the others by threatening to walk out. Each time a president or prime minister faces some intractable problem at home, either he or his opponent will hold EU membership hostage. That is the way with politicians. It doesn’t mean any nation fundamentally opposes the EU. Even Britain as a country doesn’t, for let it not be forgotten that 48 per cent of voters—more than 16 million people—voted to remain.

Now, it’s time to reinvent Britain’s relationship with Europe and celebrate the splendours of the Renaissance and the Reformation, of Beethoven, Émile Zola and Gothic architecture instead of the shells, barbed wire and trenches associated with repulsing Kaiser Wilhelm II’s Germany a century ago. Perhaps the Great War was necessary. The current issue of History Today certainly thinks so. Its front page contradicts the poets to say, ‘Tragic? Yes. Wasteful? Yes. Futile? No?’ But however necessary it may have been to beat Kaiser Bill, it was Europe’s war, not India’s. Our troops didn’t even know where Picardy was, as Shirley Williams pointed out. But 1.3 million Indians signed up, and the fields where the poppies grow were drenched with the blood of more than 74,000 Indian martyrs. Some of those who suffered and perished were obeying tribal, village or family tradition. Many simply needed a job. Others enlisted because Mohandas Karamchand Gandhi believed that fighting Britain’s war would earn dominion status for India when peace was established. Gandhi was rewarded with a medal.

The battle for Europe continues. Only the tools are different. Instead of sending millions of raw young recruits to be mown down in the fields of Picardy, Britain is now sending armies of bright young bank backroom staff to prepare for the financial disentanglement that the divorce demands. India must match them by sending diplomats, analysts and assessors to negotiate free trade agreements, open additional export offices, and identify potential sources of investment. This is an opportunity for forging close ties with both Britain and continental Europe. Both need capital and expertise. If India doesn’t act quickly, China will.