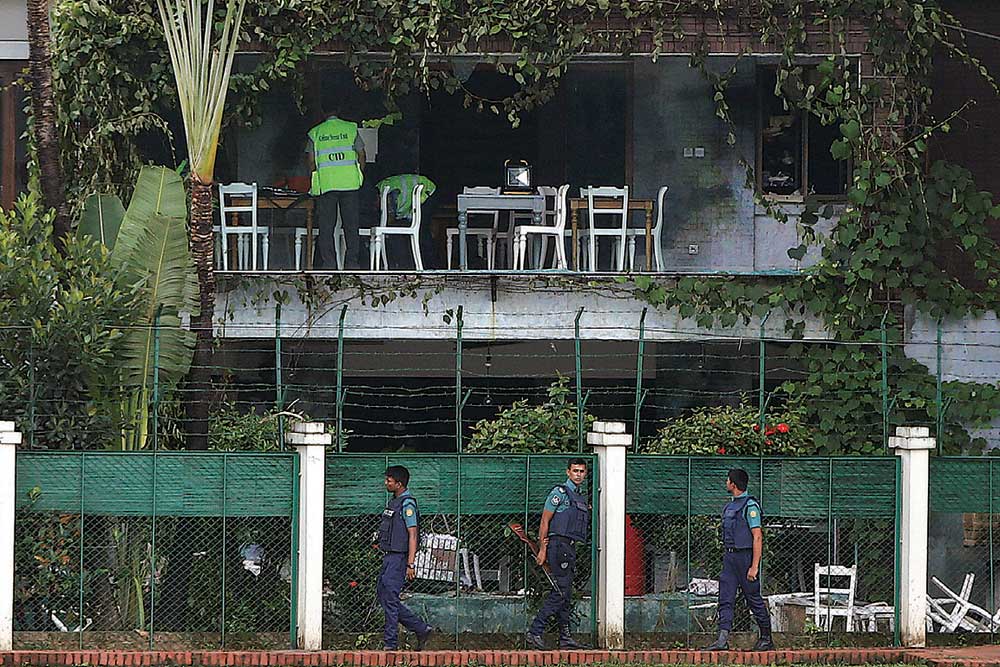 YOUNG BANGLADESHI PAINTER Farzana Urmi is distraught. She says that the Dhaka she once knew as a secular metropolis is dead and gone. “It has become a dangerous place now,” she notes pensively, emphasising that the brutal killings of writers, minorities and atheists in Bangladesh’s national capital in recent years had triggered a deep sense of insecurity among “creative people” like her. But it is the 1 July attack in a high-end restaurant at the tony diplomatic neighbourhood of Gulshan 2 that has exposed the extent, and the new trend, of radicalisation among the country’s educated youth, she agrees.

The handful of ‘regular’ guys who laid a 12-hour siege on Dhaka’s Holey Artisan Bakery and killed 22 people in the name of Islam were mostly from upper middle-class families. Most of them went to private schools and colleges abroad. They were the types who often hung out in similar high-end eateries in Dhaka, sipping beer and relishing shots of absinthe in the company of their girlfriends.

Dr Borhan Uddin Khan, professor, department of law, University of Dhaka, is upset that in recent years there has been a rapid erosion of democratic values in the country that has seen political turmoil and frequent bouts of military dictatorship since the assassination of Mujibur Rahman, Bangladesh’s founding leader and father of current prime minister Sheikh Hasina, at the hands of renegade military officers. Dr Selim Raihan, an Economics professor at the University of Dhaka, agrees with the view. Which is why he says he is not one bit surprised by the 26/11-type attack that rocked Dhaka and the bomb blasts outside the historic Sholakia Eidgah in Kishoreganj on 7 July where thousands of people had assembled for Eid-ul-Fitr prayers. The maidan here hosts the country’s largest congregation to mark the end of the Ramadan month of fasting. “I think these terrorists gathered their strength over the year in an environment of political uncertainty and discomfort in the country,” Professor Raihan says. His contention is that over the years, with direct and indirect support from the major political parties (in and outside power), there have been societal changes in the country with religion-based politics playing a larger role. “Religious extremism has eventually got its ground in society with the globalisation of Islamic terrorism,” the professor offers.

Such undercurrents are not visible when you dine with Dhaka’s bold and beautiful, the type of partying crowd you find in Holey Artisan, Spitfire, iStanbuL, Khazana—some of the swanky eateries in the city. On the other hand, the well-heeled residents of the national capital mostly discuss the great leaps that are expected under Hasina’s watch. On a recent visit to Dhaka, I had access to animated chats by corporate honchos, businessmen who argued that the ruling Awami League has brought normalcy back in the country, thanks to its tough measures to clamp down on Islamists and rivals bent upon disrupting good governance.

However, a senior official I spoke to on the phone from Delhi concedes that Hasina’s “heavy” dependence on law-enforcement agencies and select bureaucrats has led to the failure of institutions meant to protect its citizens. True, the Awami League got rid of a provision under which general elections were held by a caretaker government of various parties. In 2011, the Bangladesh Parliament under Hasina amended the constitution, scrapping the caretaker system that was introduced in 1996 to ensure that the electoral process would be overseen by non-partisan authorities.

Following the Gulshan attack, the Asian Human Rights Commission also hit out at the Hasina government, saying the terrorist strike was a result of failed institutions. The Hong Kong-based rights group said that in recent years, the institutions of Bangladesh have collapsed, to the extent that they are incapable of doing their duty. It added that law-enforcement in Bangladesh merely meant coercive action with the aim of appeasement of the ruling masters of the day. The hostages at the upscale Gulshan 2 restaurant were brutally killed before commandos rescued 13 of them and killed six gunmen in the 50-minute operation code-named Operation Thunderbolt. An 18-year-old Indian student, Tarishi Jain, was among those killed when assailants stormed the eatery.

Clearly, the Hasina government has been in denial mode about the presence of global jihadists in the country.

It has rejected warnings from intelligence networks elsewhere, including from India, that the country has become a hot recruiting ground for the IS and other Islamist groups. The ruling government, for its part, continued to blame the opposition Bangladesh Nationalist Party (BNP) and the Jamaat-ul-Mujahideen Bangladesh (JMB) for violence on minorities and bloggers.

Hasina’s heavy dependence on law-enforcement agencies and select bureaucrats has led to the failure of institutions meant to protect Bangladeshis, say experts

“It was certainly a failure on the part of the government to heed to advice on the presence of international terror groups in the country,” admits the government official, “Elite Muslims in the country thought that all this would be confined merely to stabbings of minorities, bloggers and atheists. Now they have woken up and have realised, much to their shock, that the government in power was sleeping all this while,” he says. Prime Minister Hasina visited the relatives of slain blogger Ahmed Rajib Haidar at his home in Dhaka’s Pallabi in early 2013, and then pro-Islamic parties let out a storm of protests, saying Islam was in danger from atheists and infidels. Later, when the loathsome Ansarullah Bangla Team, a much-feared extremist outfit, carried out several other brutal killings of secular writers over the next two years, she opted to stay home so as not to invite the wrath of Islamists.

“The country has paid a price now for the callousness of the administration in recognising the real threat at hand,” says another bureaucrat. To be fair to Hasina, though, she had come down heavily on home-grown terror outfits, many of whose cadres fled through porous borders to India—to West Bengal and Assam— and set up base with the connivance of ruling parties there. In October 2014, an improvised explosive device (IED) went off accidentally in a two-storey building used by Bangladesh-origin terrorists in the Khagragarh locality of Burdwan town, West Bengal.

Professor Raihan says that many things need to be done on a war footing to set things in order: “First, there is a need for a strong political will and clear understanding of this crisis. There is need for enhancing the capacity and efficiency of the law-enforcing agencies and intelligence and related agencies. However, these will not be enough. There is a need for a social movement to fight against religious terrorism.”

A renowned Dhaka-based artist who has so far been extremely media-savvy doesn’t want to be seen as speaking to the media any more. He says that the ‘Islam is in danger’ appeal is destructive to the core. Says a security expert based out of Dhaka: “The opposition parties are engaging in that rhetoric. The government is blaming them in return. What both of them don’t realise is that Bangladesh and especially Dhaka has become a tinderbox. It will remain an ‘easy’ recruiting turf for global agencies because the country as of now doesn’t have the resources to fight them. We were busy blaming each other so far,” he points out.

This security expert adds that Hasina shouldn’t make the mistake of expecting the international community to take the initiative. Professor Raihan agrees, “I think the major role has to be played by the Bangladesh government. There are concerns over the capacity, seriousness and political will though.” He lauds the role played by India: “The Indian government so far has been backing the Hasina government, as India’s interest is very clear.”

The first government official says that the latest round of attacks— especially the one in Gulshan on 1 July—could spawn similar strikes in the future. “This is the first time in Bangladesh— where typically bow-and-arrow types chased and stabbed bloggers to death—that a sophisticated attack involving educated youths, especially those carrying grenades, pistols and guns besides machetes, has taken place…. The 7 July type of attack is not new, but 1 July is,” he says. An Indian Express report, meanwhile, claimed that the assailants carried a Kalashnikov lookalike, and used it to pose for photographs. A few officials also suggest that the operation launched by commandos—which started as late as 5 am on the morning of 2 July—gave terrorists ample time to brutally kill hostages. “It was a very badly managed operation,” a former Bangladeshi intelligence official says. Open couldn’t verify this claim.

Interestingly, according to a report in the Dhaka-based Daily Star, two militants in the Gulshan 2 attack are followers of Indian Islamist preacher Zakir Naik. He is the founder of Mumbai-based Islamic Research Foundation. A Dhaka-origin blogger, who is living in exile in London, tells Open that these attacks are meant not only to terrorise people of other nationalities but also to begin the process thwarted by India in 1971: targeting of minorities in Bangladesh. “IS’s philosophy is very appealing to indoctrinated young people. They get carried away. But who gave them weapons? Who masterminded the latest attack? Why did the attackers let off those who could recite verses from the Qur’an?” he asks.

A section of Bangladeshi officials still insist that the attacks are a handiwork of local radical groups seeking attention. “That is a farcical view. The government must open its eyes and see reality as it is,” says the security expert. Ignoring earlier warnings meant that an eatery that smelt of warm croissants and excellent food was turned within hours into a scene of demonic savagery filled with the metallic smell of blood. And the anxiety is far from over.